Here Are the Favorites to Win the 2018 Nobel Peace Prize

June 12: US President Donald Trump waves as he and North Korea's leader Kim Jong Un look on from a veranda during their historic US-North Korea summit in Singapore
Saul Loeb—AFP/Getty Images
By Billy Perrigo

On Friday, the winner of the 2018 Nobel Peace Prize will be announced by the Nobel committee in Oslo. The award is given each year to the person or group that has done the most to advance world peace.

Last year the winner was the International Campaign to Abolish Nuclear Weapons, the 23rd organization (as opposed to individual) to win the prize since its establishment in 1901.

This year, there are 331 nominees for the prize, of which 216 are individuals and 115 are groups, according to the Nobel committee. It’s the second-highest number of candidates ever, after the year 2016.

The selection process is heavily guarded before Friday’s unveiling and the nominees aren’t made public. But that hasn’t stopped people from guessing who’s in the running.

Here is a selection of oddsmakers’ favorites for the 2018 Nobel Peace Prize — with the caveat that the committee is very rarely predictable in its choice of laureate:

North Korea’s spate of nuclear weapon and missile tests in 2017 left relations between the two Koreas perhaps at their lowest ebb since the Korean War of 1950-53. Now, thanks in part to their leaders, the North’s Kim Jong-un and the South’s Moon Jae-in, the countries have taken tentative steps toward nuclear disarmament. Just last month, Kim pledged to denuclearize under the supervision of foreign inspectors.

But the Nobel committee might find it hard to overlook the UN’s assessment that Kim’s regime is also currently committing widespread “crimes against humanity,” including torture, starvation and executions in prison camps. Nevertheless, the pair are the clear favorites for the 2018 Nobel Peace Prize.

Eighteen Republican lawmakers wrote to the Nobel committee in May to nominate President Trump for the 2018 Nobel Peace Prize “in recognition of his work to end the Korean War, denuclearize the Korean peninsula and bring peace to the region.” So, for much the same reason as Moon and Kim are favorites for the prize, Trump is too.

U.S. Presidents have received the prize before in office — most recently, Barack Obama in 2009. And few argue with the role Trump played in bringing Kim to the table following a spate of brinkmanship where he threatened to meet the North Korean dictator’s threats against the U.S. with “fire and fury like the world has never seen.” The British oddsmaker Ladbrokes is offering odds of 5/2 for him to win, either alone or together with others.

The figurehead of last October’s unofficial Catalan independence referendum has effectively been living in exile in Belgium since he fled the country to avoid arrest by Spanish authorities. The vote precipitated a crackdown by Spain that put hopes for an independent Catalonia on ice for the foreseeable future. Puigdemont has been largely out of the news since, though Ladbrokes still puts his chances at 12/1.

The U.N. High Commissioner for Refugees, the U.N.’s refugee agency, is at the forefront of efforts to help those fleeing war and persecution around the world. Its efforts have been recognized twice before by the Nobel committee with Peace Prizes in 1954 and 1981. This year, the UNHCR announced that more people were forcibly displaced around the world in 2017 than ever before. Another prize would be timely, at least.

No Pope has ever won the Nobel Peace Prize, but Pope Francis has been a favorite for the award ever since assuming the papacy in 2013. That year, he became TIME’s Person of the Year, in recognition of his attempts to shift the church to a more humble and conscientious footing. But 2018, a year where more grim details of clerical abuse emerged, has not been an easy year for the Pope. His handling of sexual abuse scandals in Ireland, the U.S. and Chile was criticized as too slow, damaging his image as a liberal reformist. In 2013, 72% of Americans viewed him ‘favorably,’ according to polling by CNN; in September 2018 that number had fallen to 48%. Even so, Ladbrokes put the odds of him winning at 16/1.

The Saudi blogger Raif Badawi was arrested in 2012 on charges of “insulting Islam through electronic channels,” and sentenced the following year to seven years in jail and 1,000 lashes. He remains imprisoned today, in a nation which new Crown Prince Mohammed Bin Salman is attempting to rebrand as more socially liberal. If he wins, it won’t be the first time a political prisoner has become a Nobel laureate. In 2010, the jailed Chinese human rights activist Liu Xiaobo won. He died of cancer in 2017.

One of the American Civil Liberties Union’s founding members, Jane Addams, was the first American woman to be awarded the Nobel Peace Prize back in 1931. This year, in a case that is still ongoing, the ACLU organized a class action lawsuit on behalf of more than 2,000 children separated at the U.S. border. In response, a federal judge ordered the government to reunite separated children with their families. The family separation controversy followed President Trump for weeks over the summer.

The ACLU has placed many other legal hurdles in front of Trump since his inauguration; a bet on them would be a bet on the Nobel committee choosing to snub Trump instead of awarding him a prize he says “everyone thinks” he deserves.

The original version of this story misstated the name of the figurehead of the unofficial Catalan independence referendum. It is Carles Puigdemont, not Carlos. 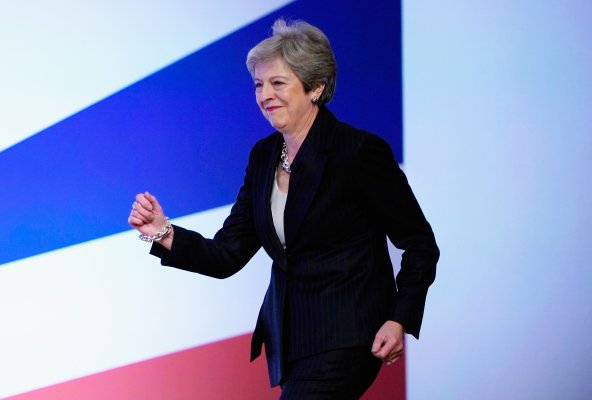 British Prime Minister Theresa May Just Danced to ABBA and People Don't Know What Is Happening Anymore
Next Up: Editor's Pick