A statue of Matilda Wormwood facing down President Donald Trump has been unveiled to celebrate the 30th anniversary of Roald Dahl’s beloved bookworm making her literary debut.

The temporary installation currently stands outside the town library in Great Missenden, Buckinghamshire—where Dahl lived for 36 years—and features the young heroine from literature defiantly confronting a blustering Trump while standing on a stack of classic novels including Moby Dick and Great Expectations.

A statue of Roald Dahl's Matilda is unveiled in Great Missenden in Buckinghamshire, alongside one of President Donald Trump, to celebrate the 30th Anniversary of Matilda the novel.
David Parry—PA Wire/AP

Trump was chosen to replace Miss Trunchbull—the villainous school principal from Dahl’s 1998 book—as Matilda’s top adversary by 42 percent of respondents in a survey of over 2,000 Brits, CNN reports. U.K. Prime Minister Theresa May and TV presenter Piers Morgan were the second and third runners-up, respectively.

“Matilda demonstrates that it’s possible for anyone, no matter how small and powerless they feel, to defeat the Trunchbulls in their own lives—a message that feels even more relevant today than it did 30 years ago,” said Bernie Hall of the Roald Dahl Story Company, which created the display. 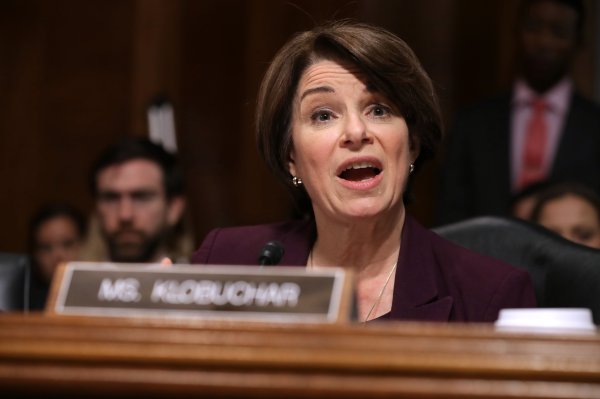 This Senator Was More Than Pleased With Her Saturday Night Live Impression
Next Up: Editor's Pick