As Indonesia Reels from the Earthquake and Tsunami, Experts Warn of More Deadly Disasters to Come

Indonesia is facing a long and painful recovery from the devastating earthquake and tsunami of two weeks ago, but scientists say that this latest calamity could simply be a warning of more deadly and destructive disasters ahead.

Palu, in Indonesia’s Central Sulawesi province, was ravaged on Sept. 28 by a 7.5-magnitude earthquake and tsunami that lashed the coastal city with waves up to 20 ft. tall. The twin disasters claimed nearly 2,000 lives, according to the U.N., with thousands more injured and missing. Survivors will feel the consequences for years: some 74,000 people lost their homes, and will live in refugee camp-like settlements for the foreseeable future.

It’s been a year of natural disasters. Hurricane Florence dumped record rainfall on the Carolinas, Typhoon Mangkhut triggered landslides and killed dozens in the Philippines, and turbulent wildfires tore across California. Another earthquake on Indonesia’s Lombok Island in July killed over 500 people.

The devastating toll of such disasters could be contributing a false sense of their frequency, experts told TIME. While climate change is increasing the severity of some natural disasters, like hurricanes, typhoons and wildfires, the number of annual earthquake and tsunami events is fairly stable. According to data compiled by the U.S. Geological Survey (U.S.G.S.), the number of severe earthquakes has remained static since 1900.

But the damage those quakes cause, and the threat they pose to human life, is increasing. A report last year from the Belgium-based Centre for Research on the Epidemiology of Disasters (CRED) documented slightly fewer natural disasters in 2017 than the previous decade, but a 49% increase in the economic losses those events inflicted.

The reasons are clear: more humans are moving into more densely populated cities, and surrounding themselves with infrastructure — roads, bridges, and buildings — that become deadly hazards during a disaster, and expensive to repair when it subsides.

People, infrastructure, and wealth are being “concentrated into increasingly exposed urban centers in the most hazardous parts of the planet,” says Bill McGuire, Emeritus Professor of Earth Sciences at University College London. “Disaster preparedness is not keeping up.”

Earthquakes and tsunamis have proven particularly deadly, claiming nearly 750,000 lives over the past 20 years, more than other extreme weather events, according to a forthcoming report from the U.N. Office for Disaster Risk Reduction.

Much of that mortality came in 2004 after a 9.1-magnitude earthquake in the southern Indian Ocean generated a devastating tsunami that killed an estimated 230,000 people in 12 countries, the majority in Indonesia.

In some cases, the very factors that make coastal cities appealing also amplify their danger. Many are built in the path of tropical storms or alongside tectonic faults that mirror coastlines. Palu is no different: it sits at the end of a long bay, which protects its residents from sea storms, McGuire notes. But that bay also helped concentrate the tsunami’s destruction, raising water levels and guiding it directly towards Palu’s inhabitants.

Erosion along the Palu-Kora fault that formed the bay around Palu also facilitated liquefaction, a phenomenon where the soil churns like ocean waves during an earthquake.

The liquefaction was a horror but it should not have been a surprise: a 2012 Indonesian government survey found that outlying tracts of Palu like Petobo and Balaroa were at high risk of liquefaction, the Associated Press reported Monday. Now, those neighborhoods are gone and thousands of former residents are still missing.

Palu’s worst hit areas won’t be rebuilt, according to a government disaster agency spokesperson, which could prevent a future tragedy. But reconstructing the rest of Palu to withstand future earthquakes will be costly.

“There is no simple answer to this problem,” McGuire wrote to TIME in an email. “Cities are simply located in the wrong place.”

Read more: Indonesia: How Liquefaction Made Mud Flow ‘Like Waves’

There is some improvement in recent years: our ability to recognize and prepare for earthquakes and tsunamis has grown by bounds, with seismic stations, tidal gauges, and seafloor sensors that measure minute tremors and changes in ocean depth.

“Indonesia has significant and continuously improved its tsunami early warning system and preparedness” since the 2004 tsunami said Laura Kong, director of the International Tsunami Information Center (ITIC) in Hawaii.

In Sulawesi, the government came under fire for preemptively canceling tsunami warning sirens and text message alerts. But just fifteen minutes separated the earthquake and tsunami, according to a timeline compiled by the New York Times. Electricity lines and cell phone towers were downed in minutes, making it unclear how much longer the alert could have gone out for.

With the unpredictability of earthquakes and tsunamis, education and awareness can be far more effective than high-tech equipment, numerous experts told TIME.

“People need to know that if they live in earthquake country … [the] ground shaking is their natural warning,” geophysicist Jason Patton wrote to TIME, adding that civilians should know to evacuate even if warning equipment fails. “A natural disaster only becomes a catastrophe if lots of people are harmed.”

Correction: The original version of this story misstated the type of phenomenon that hit Indonesia on Sept. 28. It was a tsunami, not a tidal wave. 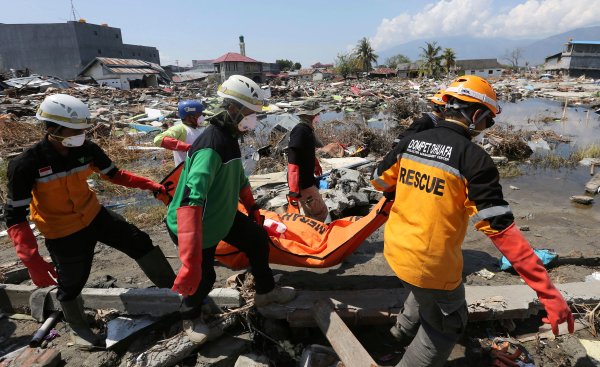