When the FBI vetted Brett Kavanaugh as a potential Supreme Court nominee, its main task was investigating whether he could pose a risk to national security. It is unclear to what degree, if any, it looked into his relationships with women.

On Friday, Sen. Jeff Flake announced his “Yes” vote was conditional on the FBI reopening its investigation into Kavanaugh’s past — and the Senate Judiciary Committee agreed to that very condition and delayed the Kavanaugh confirmation vote a week.

The statement the committee released instructed the FBI investigation — which the White House will likely have to request — be completed “no later than one week from [Friday]” and be limited to “current credible allegations against the nominee.”

This was a dramatic departure from rhetoric the GOP committee members had on Thursday.

For Democrats, the lack of one was further proof that the Senate majority wasn’t doing its due diligence on a lifetime appointment.

Friday morning, it appeared Sen. Jeff Flake was with his other Republican colleagues.

“While some may argue that a different standard should apply regarding the Senate’s advice and consent responsibilities, I believe that the Constitution’s provisions of fairness and due process apply here as well,” Flake concluded. “I will vote to confirm Judge Kavanaugh.”

But later, after being confronted by protestors who said they were also sexually assaulted, and after his good friend, Delaware Sen. Chris Coons reportedly muttered an expletive when he was told Flake intended to vote affirmatively, he weakened his stance.

“Don’t look away from me,” Maria Gallagher, the elevator protestor, told Flake. “Look at me and tell me that it doesn’t matter what happened to me, that you will let people like that go into the highest court of the land and tell everyone what they can do to their bodies.”

After meeting with Democratic leaders for nearly an hour in an anteroom to the chamber, Flake announced new conditions.

“I think it would be proper to delay the floor vote for up to but not more than one week, in order to let the FBI do an investigation, limited in time and scope to the current allegations that are there,” Flake said.

Chairman Chuck Grassley opened Thursday’s hearing by discussing the formal vetting process that Kavanaugh had gone through as well as his previous background checks while working in the White House and facing confirmation as a federal judge.

He argued that committee staffers were able to investigate Ford’s claims on their own.

He then quoted remarks former Vice President Joe Biden made in 1991 while he was the chairman presiding over Thomas’s hearing. At the time, the FBI had looked into Anita Hill’s claims that Thomas sexually harassed her, but did not make any conclusions about their validity.

Democrats have fervently argued the FBI should investigate the claims against Kavanaugh, which the Justice Department maintains is outside the purview of the FBI to judge the significance or the credibility of an accusation, saying the allegation “does not involve any potential federal crime.”

Additionally, all three women who have come forward with allegations, including Ford, Deborah Ramirez and Julie Swetnick have personally, or through their lawyers, called for the FBI to investigate.

Sen. Sheldon Whitehouse, a Rhode Island Democrat, was especially vocal about the need for further investigation by the FBI.

Whitehouse also vowed to do everything in his power to ensure the allegations were fully investigated.

“The very bare minimum that a person who comes forward is owed, is sincere and thorough investigation and you’ve been denied that,” he said, addressing Ford. “And I will make a personal pledge to you, here, that however long it takes, in whatever forum I can do it, whenever it’s possible, I will do whatever’s in my power to make sure that your claims get a full and proper investigation and not just this.”

Notably, if the FBI were to re-open an investigation into Kavanaugh’s background, the White House would have to order it, Ron Hosko, a former assistant director of the FBI, told CBS.

“The White House is the client, so they would have to order it,” Hosko said.

During the hearing, Democratic Sen. Dick Durbin of Illinois asked Kavanaugh if he would turn to a White House lawyer in attendance and ask him directly for an FBI investigation to clear his own name.

“I welcome whatever the committee wants to do because I’m telling the truth,” he said. 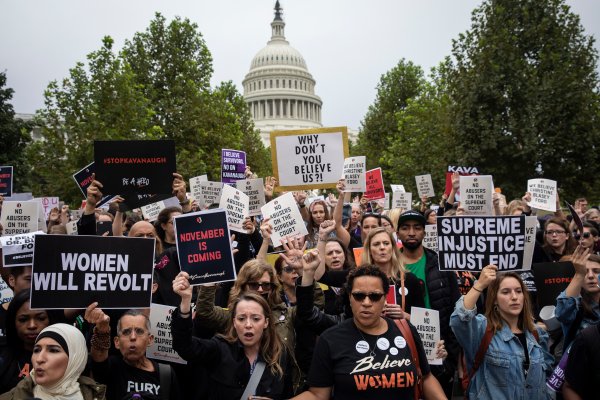 'I Felt So Enraged.' Activists Descend on Capitol Hill for Kavanaugh and Ford's Senate Hearing
Next Up: Editor's Pick