We could all use some good news, so thankfully everyone’s favorite actor Tom Hanks as Mister Rogers is here.

In a new photo shared by Sony Pictures, the beloved actor poses in costume as none other than similarly beloved television host Fred Rogers. From the cherry-red cardigan sweater to the bright blue sneakers to the crisp khakis, Hanks looks the spitting image of Rogers as he’s depicted, perched on the entrance to a trailer. With a warm smile already in place, he looks like he’s ready to welcome us to the neighborhood, which is a great start.

News that Hanks had signed on to depict Rogers in the upcoming Mister Rogers movie, the biopic then titled You Are My Friend came out in January, to much excited anticipation. The now untitled movie, which is being directed by Marielle Heller, will be a drama based on the friendship between Rogers and Tom Junod, a journalist who profiled Rogers for Esquire magazine back in 1998. It’s due out in October 2019, which means we only have to wait a little more than a year now to see Hanks in all his Rogers-inspired glory.

Until then, Rogers fans can return to the friendly, musical world of his neighborhood with the recent documentary Won’t You Be My Neighbor? which tracks his career as a formative character in the American imagination.

People seem quite happy with this first look at Hanks, too. 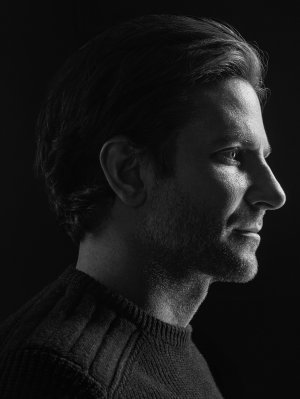 Bradley Cooper Was Afraid to Direct. Then He Found Lady Gaga
Next Up: Editor's Pick