Couple Listening to the Kavanaugh Hearings on the Subway Goes Viral

An image of a couple spotted intently listening to the confirmation hearings of Supreme Court nominee Brett Kavanaugh while riding the subway on Thursday has gone viral.

In a photo shared in a tweet by reporter Amanda Aronczyk, an older couple is seen listening to a phone playing the hearings while riding the uptown 1 subway train in New York City. The couple appears to be completely engrossed by the hearings, a sentiment no doubt shared by millions of Americans who tuned into on Thursday morning to watch and listen to the testimony of Dr. Christine Blasey Ford, who alleged that Kavanaugh sexually assaulted her at a high school party.

During her testimony, Dr. Blasey Ford described her alleged sexual assault by Kavanaugh and its traumatic effect on her life. Ford often held back tears, noted that she was “terrified” and that she only came forward because she felt it was her “civic duty.” Since Ford has spoken out about her alleged sexual assault, Kavanaugh has been accused of two more alleged instances of sexual misconduct.

It was a riveting moment for Americans watching. See the photo of the couple, which garnered nearly 20,000 likes below. 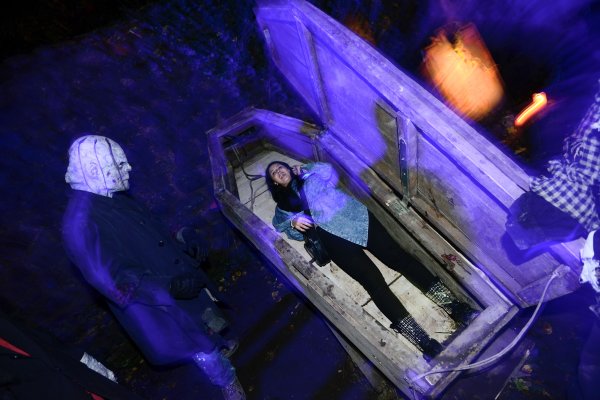 This "Coffin Challenge" Is Not for the Claustrophobic
Next Up: Editor's Pick