An attorney for Christine Blasey Ford said Wednesday that the plan to move forward with a hearing about her client’s sexual assault accusation against Supreme Court nominee Brett Kavanaugh “is not a fair or good faith investigation.”

Ford, a California professor, accused Kavanaugh of attempting to sexually assault her nearly 40 years ago at a high school party. Kavanaugh has denied the allegation, calling it “completely false.”

The Senate Judiciary Committee scheduled a public hearing about the accusation for Monday. While Ford’s lawyers said she is willing to testify publicly about the incident, they told the Committee on Tuesday that Ford wants the FBI to investigate the allegation first. But Senate Republicans said the hearing would proceed as planned on Monday.

“She continues to believe that a full non-partisan investigation of this matter is needed and she is willing to cooperate with the Committee,” Ford’s attorney, Lisa Banks, said in a statement Wednesday night. “However, the Committee’s stated plan to move forward with a hearing that has only two witnesses is not a fair or good faith investigation; there are multiple witnesses whose names have appeared publicly and should be included in any proceeding. The rush to a hearing is unnecessary, and contrary to the Committee discovering the truth.”

Republicans have rejected calls for an FBI investigation. Senate Judiciary Committee Chairman Chuck Grassley tweeted Wednesday that “no other OUTSIDE investigation is necessary.”

Earlier on Wednesday, President Trump defended Kavanaugh as an “extraordinary man” and called on Ford to testify before the Senate Judiciary Committee. “If she shows up, that would be wonderful. If she doesn’t show up, that would be unfortunate,” Trump said.

“But I can only say this: He is such an outstanding man. Very hard for me to imagine that anything happened,” he added.

Banks said Ford has received threats in the days since her name became public.

“Dr. Ford was reluctantly thrust into the public spotlight only two days ago. She is currently unable to go home, and is receiving ongoing threats to her and her family’s safety,” Banks said in Wednesday’s statement. “Fairness and respect for her situation dictate that she should have time to deal with this.” 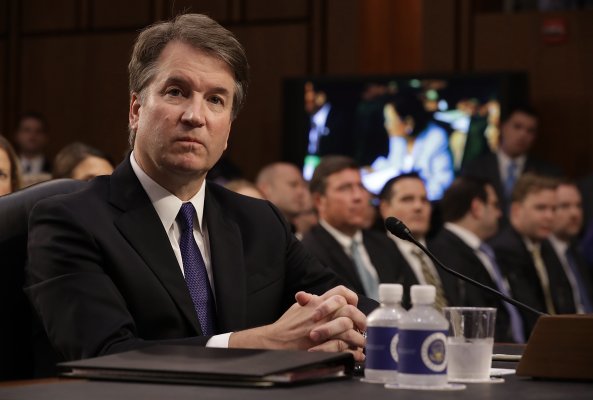 'If She Shows Up.' President Trump Says Christine Blasey Ford Should Testify
Next Up: Editor's Pick