Everything was coming up roses on the 70th Annual Primetime Emmy Awards red carpet, where Tracee Ellis Ross, Thandie Newton, and Yara Shahidi made a compelling case for bright pink as this season’s hottest color for this awards season. During television’s biggest night, it seemed like you couldn’t turn around without seeing a flash of the rosy shade — and because the Emmys are one of the earliest of the major awards shows, there’s a very good chance that we’ll be seeing more takes on bold pink in the future. With that in mind, here’s a look at the best vibrant pink ensembles of the night.

Tracee Ellis Ross shut down the red carpet when she showed up in a hot pink Valentino haute couture gown, undeniably the best (and most voluminous) look of the night.

Allison Janney upped the ante when she not only selected a bold fuschia Prabal Gurung gown that was not only sequined but also boasted a dramatic long sleeve and thigh-skimming high slit.

Michelle Wolf also sprung for the sequin trend, sporting a strapless sequined Thierry Mugler gown in bubblegum pink for a look that was part Vargas girl, but 100% sparkling.

It wasn’t just nominees that brought the heat at the 2018 Emmys, however; Sandra Oh’s mom, Jeon Young-nam, wore a vibrant pink hanbok to cheer on her daughter at the show.

While Laura Dern’s son, Ellery Harper, hopped on the trend by pairing his sleek black suit with a louche pink turtleneck. 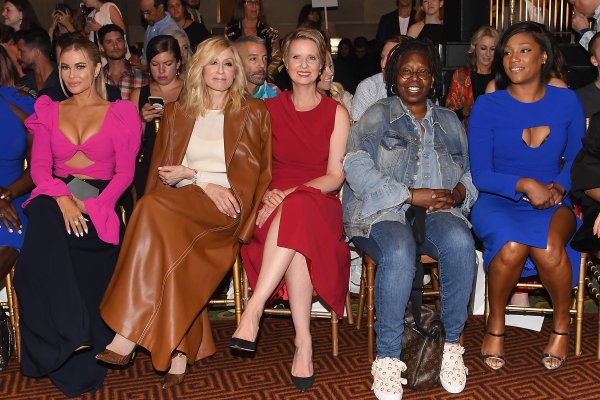 A Comprehensive Guide to the Most Show-Stopping Moments of New York Fashion Week
Next Up: Editor's Pick