The Best and Worst Moments of the 2018 Emmys

The 70th Primetime Emmy Awards were a rather dull affair. John Legend had already reached EGOT status before the awards show aired. The acceptance speeches were brief and decidedly apolitical. And hosts Michael Che and Colin Jost delivered a tepid opening monologue that didn’t stir up the controversy most people expected from Saturday Night Live’s Weekend Update hosts.

Most surprising was that almost every actor who won rattled off a list of thank yous rather than using the platform to interrogate issues like racism, sexism and homophobia that plague Hollywood and have lately been thrown into stark relief. Just last year, host Stephen Colbert skewered Trump with a Handmaid’s Tale themed number; Lena Waithe and Donald Glover made history with their Emmy wins and spoke openly about issues of sexuality and race in their speeches; and the stars of Big Little Lies dedicated their time on stage to address domestic violence and assault.

This year’s show was simply boring. Still, there were a few moments that captured the attention of viewers, including a surprise proposal midway through the ceremony. Here are the best and worst moments of the 2018 Emmys.

Chrissy Teigen won best reaction shot of the night. During the opening monologue, Che joked about Laurie Metcalfe. The comedian was nominated for Best Supporting Actress in a Comedy for Roseanne, despite the controversy surrounding the cancelled show’s star, Roseanne Barr.

“Do you know how great an actress you have to be to get nominated for Roseanne now?” Michael Che asked. “That’s like nominating a cop for a BET Award. That doesn’t happen. It would be weird.”

The camera cut to Teigen who grimaced and shrank down in her seat while husband Legend smiled and clapped, blissfully unaware of the awkwardness of the situation.

Teddy Perkins as Himself in 'Atlanta'.
Guy D'Alema—FX

Worst: We missed out on a Teddy Perkins acceptance speech

Glover was up for several awards as the star and creator of Atlanta Monday night. Had the show won, audiences might have been treated to a speech by one of Glover’s most unsettling characters, Teddy Perkins. The actor appeared to have applied prosthetics to recreate the character that Glover played in whiteface on the show.

But viewers spotted Glover in the crowd a couple awards later, sans prosthetics. Perhaps it was a different person impersonating the character. Viewers began offering up theories on Twitter. The true tragedy is that we’ll never know what Glover had planned for his acceptance speech—because all clues point toward it being a barn burner.

Best: Betty White gets her due

The Emmys recognized Betty White, who wondered aloud at the fact that she’s still working in the industry at age 96. The television legend has won eight Emmys and been nominated 24 times. “It’s incredible that you can be in a career this long and still have people put up with you,” she says. “I wish they did that at home.”

Though White was only on stage for about five minutes, her jokes proved funnier than the entire opening monologue.

Glenn Weiss, winner of the Outstanding Directing for a Variety Special award for 'The Oscars,' waves to the audience after proposing to Jan Svendsen onstage during the 70th Emmy Awards at the Microsoft Theatre in Los Angeles on Sept. 17, 2018.
Robyn Beck—AFP/Getty Images

Oscars director Glenn Weiss won an Emmy and seized his time onstage to propose to his girlfriend, Jan Svendsen. You can always depend on a room full of actors to offer dramatic reactions, and the Emmy nominees and presenters delivered.

Leslie Jones completely lost it in the aisle. A giddy Benedict Cumberbatch cheered. And Claire Foy began to cry.

A dumbstruck Thandie Newton took Che’s advice from earlier in the show and thanked God at the beginning of her speech: “I don’t even believe in God, but I’m going to thank her tonight.” The sensors bleeped our her next sentence as she swore in disbelief at her win for Best Supporting Actress in a Drama.

Worst: The misuse of Maya Rudolph and Fred Armisen

Normally funny people Maya Rudolph and Fred Armisen were roped into an incredibly bit that flopped. The two occasionally took the stage to answer questions posed by Che and Jost about Emmys history.

The duo was doomed from the start. No bit should rely on making boring pieces of information even more boring. The comedians answered questions like, “What is that ball that the Emmy is holding?” with quips like, “Her famous ball of ribbons.” That’s just bad writing. Free Maya!

Matthew Rhys accepts the Outstanding Lead Actor in a Drama Series award for 'The Americans' onstage during the 70th Emmy Awards at Microsoft Theater on Sept. 17, 2018 in Los Angeles.
Jeff Kravitz—FilmMagic/Getty Images

Critical darling The Americans had one last chance to bring home gold after six years of snubs in the lead acting, writing and drama categories. Showrunners Joe Weisberg and Joel Fields finally won an Emmy for writing, while co-lead Matthew Rhys won for Lead Actor in a Drama. (The show sadly missed out on both Best Actress for Kerri Russell and Best Drama.)

During his acceptance speech, Rhys thanked is co-star and girlfriend, Russell, joking that Russell told him that if he tried to propose to her onstage she’d “punch him clean in the mouth.”

Worst: The lack of diversity on the show

The evening opened with a jokey number about how Hollywood had solved its diversity issue. Keenan Thompson and Kate McKinnon sang of Sandra Oh making history as the first Asian actor to be nominated for Best Actress in a Drama: “There were none, now there’s one. And we‘re done!”

But the rest of the awards show, Hollywood congratulated itself over and over again for recognizing the problem without actually resolving it. The winners on Monday night were overwhelmingly white: the critically beloved show Atlanta was completely shut out, as was Killing Eve star Sandra Oh. Che even pointed out during the show that the first six winners were all white.

More to the point, both presenters and winners totally avoided anything that could possibly be construed as political or controversial. James Corden made an #EmmysSoWhite joke midway through the evening that felt cringe-worthy—if only because this year, they were.

Hannah Gadsby, who broke out stateside this year with the hit standup special Nanette, proved to be the best presenter of the evening. She presented her category alone and joked that no man would take the stage with her:

“This is … not normal? The world’s gone a bit crazy. I mean, for somebody like me — a nobody, from nowhere — gets this sweet gig, free suit, new boots, just cause I don’t like men? That’s a joke, of course. Just jokes, fellas, calm down. #NotAllMen, but a lot of ’em. No, it is just jokes, but what are jokes these days? We don’t know. Nobody knows what jokes are. Especially not men! Am I right, fellas? That’s why I’m presenting alone.”

Gadsby for host next year!

Writer-producer D.B. Weiss and the cast of "Game of Thrones" accept the award Outstanding Drama series onstage during the 70th Emmy Awards at the Microsoft Theatre in Los Angeles on Sept. 17, 2018.
Robyn Beck—AFP/Getty Images

Worst: George R.R. Martin being at the Emmys rather than at home finishing the damn books

We will withhold our congratulations until we have a copy of Winds of Winter in our hands. 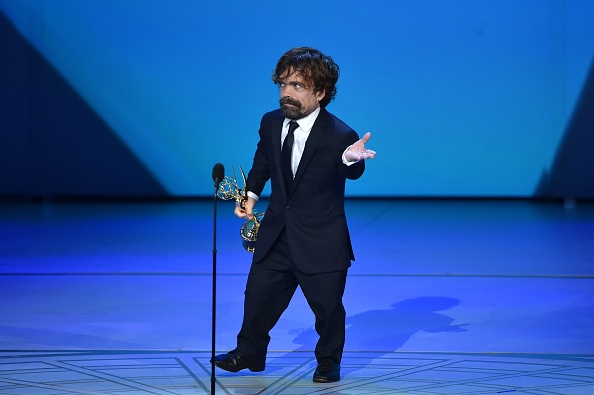 The Game of Thrones Cast Loved Getting Trolled at the Emmys
Next Up: Editor's Pick