Sparks still flew at the second day of Judge Brett Kavanaugh’s Supreme Court confirmation hearings. But unlike the first day, most of the heat came from Democratic lawmakers, rather than raucous protesters.

Protesters continued regularly interrupting the proceedings, as they had since the hearings began on Tuesday.

As soon as Senate Judiciary Chairman Chuck Grassely began his opening statement, shouts of “Sham president, sham Justice!” emanated from the back of the room. “We are not working with the Democrats, we are working with ourselves!” one shouted as police removed her.

The scenes led ranking member Dianne Feinstein to tell Kavanaugh before she began questioning him, “I’m sorry about the circumstances, but we’ll get through it”

That didn’t mean Feinstein gave Kavanaugh a pass. To the contrary, she grilled him on everything from his view on Roe v. Wade, the 1973 ruling which upheld a woman’s constitutional right to an abortion; his dissent in 2011 from a circuit court ruling on gun control; and in what could very well be an issue he could be dealing with, his view on a Presidential response to a subpoena.

Kavanaugh evaded pointed answers to all of these probes. He stated his reliance on precedent for the first two — although he did not give his opinion on Roe — and said he couldn’t answer the third due to another precedent, the standard established during the confirmation hearings of Supreme Court Justice Ruth Bader Ginsburg two and a half decades ago. Kavanaugh said he was unable provide give a response.

“As a matter of the canons of judicial independence, I can’t give you an answer to that hypothetical question,” he responded. (He issued that same response when Democratic Sen. Patrick Leahy asked him about President Donald Trump’s asserted right to a self-pardon).

At the end of her questioning, Feinstein thanked Kavanaugh for being “forthcoming” — an exchange that would be among the most friendly the nominee would have with Democratic members of the committee. The next Democrat to question Kavanaugh was Leahy, who argued that Kavanaugh may have perjured himself in front of the committee over a decade ago when he said he didn’t know that a staffer on the judiciary committee had stolen emails detailing Democratic strategy on Bush’s judicial nominees when he was Bush’s staff secretary.

Kavanaugh seemed to hold his own for the most part. He hit the expected notes, invoking the importance of landmark Supreme Court decisions like Brown v. Board of Education — which Senator Kamala Harris had used as in her opening statement as a reason he shouldn’t be confirmed — and US v. Nixon, the unanimous decision that limited the scope of presidential power by ordering then-President Richard Nixon to hand over tape recordings from his White House that ultimately led to his resignation.

He repeatedly invoked his desire to work as a team with the other justices. And, in what could be construed as an implicit reference to the President, he insisted no one was above the law and that his ultimate loyalty was to the Constitution.

But at times, like the questioning from Leahy — he seemed a bit more flummoxed, or at the very least, reticent. When Democratic Sen. Chris Coons of Delaware, who is one of the Senators who has introduced legislation to protect the Special Counsel’s office, asked about the article Kavanaugh authored in 1998 arguing that a President can fire a Special Counsel investigating him, he declined to delve into any more detail.

That wasn’t the only answer Democrats were seeking that he didn’t provide. Aside from declining to weigh in on a possible presidential pardon and subpoena, he did not say he would recuse himself from cases involving the President, noting that doing so would potentially impede his judicial independence. When asked to weigh in on President Trump’s most recent tweet disavowing the indictments of two Congressmen who supported him, he said he needed to stay “three ZIP codes away from the line of current events or politics.”

Legal experts said most of these non-responses were standard. “I would have been frankly shocked if he had answered those questions,” said Paul M. Collins, and Director of Legal Studies at the University of Massachusetts Amherst and the co-author of “Supreme Court Confirmation Hearings and Constitutional Change.”

Collins did, however, say he found it odd that Kavanaugh declined to recuse himself. “It seems very clear to me that it is inappropriate for the president to be able to select a judge who may decide his fate and there is case law that supports this view,” he wrote in an e-mail to TIME. “For a judge who claims to care a lot about precedent, there is a problem here.”

But Kavanaugh wasn’t just under fire from committee members and protesters. As the Senators on the committee grilled Kavanaugh, Senate Minority Leader Chuck Schumer was still doing his part to try to push the hearing back, objecting to waive the rule that would have enabled the judiciary committee to continue questioning Kavanaugh after 2 p.m. This could have potentially pushed the hearing into the weekend or even next week.

But McConnell simply responded by adjourning the Senate for the rest of the day. The committee continued its questioning. Meanwhile, CNN reported that two Democratic Senators facing reelection in states where Trump won by double digits, North Dakota’s Heidi Heitkamp and West Virginia’s Joe Manchin, said they have seen nothing disqualifying him from confirmation so far.

That seems to embody the overall theme of the hearings: Democrats can use every tactic in the book. But it probably won’t be enough to stop Kavanaugh’s confirmation. 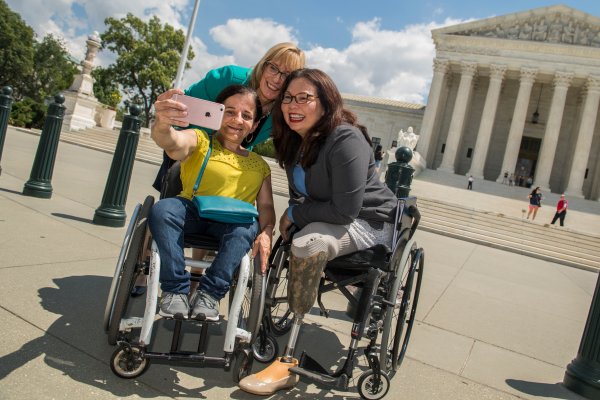 Brett Kavanaugh Would Put Businesses Ahead of Americans With Disabilities
Next Up: Editor's Pick