These Five Leaders Had the Worst Summers of Their Political Lives

Another August gone by too quickly. But for some political leaders, summer can’t end soon enough. Here are five leaders who have suffered true summers of discontent.

When the failed assassination attempt on your life qualifies as the highlight of your summer, it’s not looking good. On August 4, Venezuelan President Nicolas Maduro was giving a speech at a military parade in Caracas when a pack of drones armed with explosives went off near the stage. Maduro survived the attempt and promptly blamed the far-right, neighboring Colombia, and plotters in the US. for staging the attack. Given that Venezuela is currently gripped by staggering medicine and food shortages (in 2017, the average Venezuelan lost 24 pounds or 11 kilograms), there’s no shortage of legitimate suspects.

Saudi Arabia’s 32-year old crown prince arrived on the global stage with dizzying expectations, propelled by his ambitious “Vision 2030” program to transform Saudi Arabia into a cutting-edge 21st century economy. The tenacity with which the man knows as “MBS” seized power made him plenty of powerful enemies; in late May, Saudi authorities released footage of him to prove he was still alive following rumors of his death. But hopes remained high in June, when the Kingdom lifted its ban on women driving and issued its first female driver’s licenses. But alongside that, the Saudi government has been increasingly cracking down on human and women’s rights advocates; from MBS’s perspective, allowing women to drive was his gift to Saudi society, not an invitation for more human rights scrutiny. But scrutiny is what he got, including a condemnation from Canada over its arrest of a young female activist. Riyadh expelled Canada’s ambassador and halted trade deals as the diplomatic spat escalated.

The economic transformation of the Kingdom hasn’t gone much better for MBS. The decision to list five percent of Saudi Arabia’s oil giant Aramco on a public exchange has been postponed indefinitely, capital is flying out of the country, and the costly war in Yemen rages on. From progressive darling to beleaguered leader in just one summer.

President Hassan Rouhani speaks at the Iranian Parliament in the capital Tehran, on August 28, 2018. It was the first time Rouhani had been summoned by parliament in his five years in power, with MPs demanding answers on unemployment, rising prices and the collapsing value of the rial, which has lost more than half its value since April.
Atta Kenare—AFP/Getty Images

While the rhetoric coming out of Tehran has remained defiant in the wake of U.S. President Donald Trump’s decision to pull out of the Iran nuclear deal this past May, Iran’s economy has put up nowhere near the same kind of fight. Since the U.S. decided to walk away, Iran’s economy has stumbled heavily—its currency has plummeted in value by 50 percent since April, and inflation has soared. But as bad as this summer’s developments have been for Iran, they’ve even been even worse for its president—and champion of the 2015 nuclear deal—Hassan Rouhani.

Rouhani is a moderate who took on the country’s politically-dominant hardliners with a message of economic revival, one that resonated with the Iranian public. But now that Iran’s economy has begun spiraling downwards, Rouhani is helplessly left watching his political fortunes spiral down with them. Just this week, Rouhani was called in front of Iran’s parliament and publicly raked over the coals for the country’s economic woes. This followed Parliament’s decision earlier in the week to impeach his finance minister, joining his labor minister out the door. But Rouhani isn’t going anywhere as Supreme Leader Ali Khamenei is worried that dismissing Rouhani would only further destabilize Iran’s economy. And all this is before full U.S. sanctions against Iran’s oil industry snap back in November. When they do, Rouhani will have a front-row seat to the mayhem.

After general elections in June, Turkish President Recep Tayyip Erdogan finally secured the expanded presidential powers he has long coveted. But these sweeping new powers have done little to calm his paranoia, exacerbated by a failed coup attempt in July 2016. Erdogan’s decision to appoint his son-in-law to the posts of both treasury and finance minister as Turkey’s economy teetered only underscored that point.

Turkey’s economy was already sliding, given the broader difficulties emerging markets currently face. Erdogan’s insistence that interest rates be kept low by Turkey’s central bank made matters worse, calling into question the central bank’s political independence. But things really took a turn when Erdogan blundered into an economic stand-off with the U.S. over the supposed release of American pastor Andrew Brunson, shoving Turkey’s lira off the cliff. In August alone, the value of Turkey’s currency has plummeted by more than 25 percent (it’s down 40 percent for the year). So long as Erdogan continues to stare down Trump and play politics with Turkey’s monetary policy, the country’s economic position is unlikely to improve anytime soon.

Finally, President Mauricio Macri has had a long hot summer—though it’s actually winter in Argentina. Macri, the former mayor of Buenos Aires and pro-business reformer, was elected in 2015 to help right Argentina’s financial ship after years of economic mismanagement. Unfortunately, the depth of Argentina’s economic dysfunction—coupled with the worst drought the country has seen in three decades— was so severe that Macri was forced to go to the IMF in June to secure a 3-year, $50 billion credit line, the largest aid package in the Fund’s history. Given the IMF’s role in Argentina’s economic collapse at the turn of the millennium, it was a move borne of desperation, especially considering that Macri faces re-election in 2019. Yet, that loan hasn’t stopped the bleeding; the Argentine peso has lost almost 50 percent of its value for the year overall, with significant plunges just this week bringing it to historic lows.

The silver lining for Macri is that the country is currently transfixed by a series of corruption investigations that have caught up 26 “high-profile” individuals and are currently focused on Cristina Fernandez de Kirchner, Macri’s predecessor and former rival. It’s an oddity for a country where graft and corruption are usually glossed over. As Macri so eloquently put it, “this beats watching Netflix.” Not a bad way to spend summer, after all. 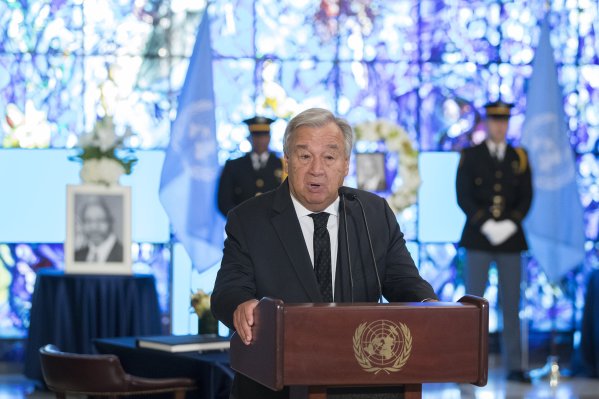 In a G-Zero World, We Need a Robust U.N. More Than Ever
Next Up: Editor's Pick