Why Some People Hate Being Hugged, According to Science

If you hate being hugged, the world can be a challenging place. You never know when someone you’re meeting for a quick coffee will approach you, arms open wide, coming in for an embrace.

Your options are limited: you can awkwardly dodge the gesture, stick out your hand for a handshake, or submit to the unwanted bear hug.

Regardless of whether you are pro or anti-embrace, here’s everything to know about the human behavior of hugging:

Why people love or loathe hugging

So why is it that some people love a good hug, while others abhor them? According to experts, it may have something to do with how you were raised.

“Our tendency to engage in physical touch—whether hugging, a pat on the back, or linking arms with a friend—is often a product of our early childhood experiences,” says Suzanne Degges-White, a professor of Counseling and Counselor Education at Northern Illinois University. A 2012 study published in Comprehensive Psychology found that people who were raised by parents who were frequent huggers were more likely to be huggers in adulthood. The study concluded that, “hugging is an important element in a child’s emotional upbringing.”

Conversely, Degges-White says, for people raised by devout non-huggers, the very thought of hugging might make them uncomfortable. “In a family that was not typically physically demonstrative, children may grow up and follow that same pattern with their own kids,” she says.

Still, she notes instances when growing up without physical touch can actually have the opposite effect. “Some children grow up and feel ‘starved’ for touch and become social huggers that can’t greet a friend without an embrace or a touch on the shoulder,” Degges-White says.

Whether you grew up in a family that was always hugging or was brought up in an environment that lacked touch—these factors can leave a lasting physiological impact.

Darcia Narvaez, a professor of psychology at University of Notre Dame, says that there are two main ways that not being touched can affect a growing body: it can lead to an underdeveloped vagus nerve, a bundle of nerves that runs from the spinal cord to the abdomen, which research shows can decrease people’s ability to be intimate or compassionate, and can lead to an underdeveloped oxytocin system, the glands which release the oxytocin hormone that can help humans form bonds with other people.

As proof, Narvaez points to a group of Romanian orphans, who were at the center of a 2014 study on the lasting impact of neglect on developing minds. Romanian orphans who were adopted had malfunctioning oxytocin systems, according to the study. “They were hardly touched in the orphanage and so did not display the rise in oxytocin— ‘the cuddle hormone’—well-cared-for children have when sitting on their parent’s lap,” Narvaez says.

Without this hormone, it can be harder to pick up on social cues and even be more sociable. So hugging and touch are incredibly important for youngsters—even if you don’t particularly like them as an adult.

Self-esteem and body issues may also play a role in someone’s hugging predilections. “People who are more open to physical touch with others typically have higher levels of self-confidence,” says Degges-White. “People who have higher levels of social anxiety, in general, may be hesitant to engage in affectionate touches with others, including friends.” And the fear of someone ‘reaching out’—literally and figuratively—can make that discomfort even worse, she warns.

There’s also a cultural component to being hug avoidant. People in the U.S. and England hug and touch way less often than people in France or Puerto Rico, according to a 2010 study by the Greater Good Science Center at UC Berkeley.

How huggers should interact with people who are hug avoidant

The Emily Post Institute, which carries on the work of the eponymous doyenne of etiquette, suggests skipping the hug altogether unless you are closely acquainted with someone. The reason is simple: while you might be comfortable with it, “not everyone else—even those who might go along with it quietly—are,” the institute wrote in a blog post.

The manners maven also encouraged huggers to take note of body language: when someone proffers their hand instead of going in for a bear hug for example, recognize the signal, and then shake on it. The body language of non-huggers is hard to miss, too: If you’re going in for a hug and notice a grimace or a look of horror in the person’s eyes, you might consider aborting the mission.

Samantha Hess—a “professional cuddler” and founder of a Portland, Oregon-based service that teaches people how to enjoy platonic touch—says it’s important to be mindful of other people’s cues. “Everyone has the right to control what happens to their body,” she says. “Many of our clients aren’t comfortable with even a handshake when they first arrive.”

Hess adds that it can take weeks or even months for her clients to feel comfortable enough to enjoy a good old-fashioned embrace—if they ever get there at all.

The scientific benefits of hugging

There is a very real reason to try hugging: it may make you less likely to get sick.

In a 2015 study, researchers from Carnegie Mellon University looked at the effects that hugs and other forms of affection can have on the immune system. Specifically, researchers wanted to know if the people who felt loved were less susceptible to the common cold—and they were: 32% of that immune boost came from the stress-alleviating effects of hugging.

“Those who receive more hugs are somewhat more protected from infection,” the study concluded.

But if anti-huggers are still unconvinced, they may want to make note of a 2014 study published in the American Journal of Infection Control that found that fist bumping is the most hygienic form of greeting—an alternative that requires minimal contact.

How to overcome your aversion to hugs

While no one should ever feel obligated to hug someone, if you want to overcome your hug aversion, Hess’s company has a carefully laid out plan for helping people overcome their distaste for the embrace. “We go over consent and boundaries prior to any touch and reassure them they are always welcome to change their mind,” she explains. “We have 78 cuddle poses we can guide people through so we can find something for just about any comfort level.”

And for those who don’t mind physical touch, but still aren’t sold on hugging, Degges-White suggests pushing through the temporary unease and go for the embrace. “You may very well find yourself overcome with relief, gratitude, surprise, acceptance and even regret for having closed yourself off from your own self for so long,” she says. 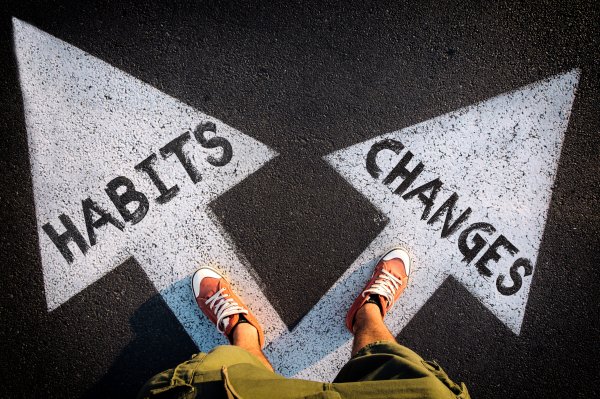 5 Science-Approved Ways to Break a Bad Habit
Next Up: Editor's Pick