John McCain Was a Legend Even Before He Was a War Hero. His Legacy Is Vital in Today's World

As a Midshipman at U.S. Naval Academy in the 1970s, I had my first close-up look at John McCain. I was part of a small group of Midshipmen who was privileged to meet with him when he visited Annapolis. He was a total legend in the Brigade of Midshipmen, but not for his war record. We knew about the Hanoi Hilton, of course — but truth be told, we were much more impressed by everything he got away with at the Academy. No one “went over the wall” (as in, violated curfew) more than Midshipman McCain. No one racked up more demerits. No one dated more women. He was a legend.

We all knew he graduated at just about the absolute bottom of his class of 899 at Annapolis, and we loved his bucking of authority even as he skated on the edge of expulsion. Clearly the objection to authority was a central organizing feature of his life. He was a Naval Academy legend long before he was a Navy legend or a national legend, and those of us who wear the ring of Annapolis will always claim him as that USNA legend first. It is so fitting he will be buried next to his best friend and classmate at Annapolis, Admiral Chuck Larson, who was at the top of their class and eventually became the Superintendent of the Academy — the ultimate odd couple. They will lie forever in the USNA cemetery overlooking Hospital Point and the Severn River beyond.

Later, in the early 1980s, when I was serving as a destroyer captain for the first time in Norfolk, Va., I was informed he would be visiting my brand-new warship, USS BARRY. He was a relatively junior Senator, and the delegation was headed by Senator Strom Thurmond. He needed to use an outside phone line, and it didn’t work properly. He lost that famous John McCain temper, yelled at me for my sins and stomped out of my cabin. But five minutes later, he apologized as we headed to the mess decks to address my crew. When he spoke to them, I was deeply impressed — he had them alternatively in awe, in stitches at his one-liners and ultimately inspired by his own life and experiences. As a result of horrific treatment at the Hanoi Hilton, he could not raise his arms above his head. But he never had a problem raising his voice. Even when his terminal illness put him in a wheelchair, you never had a problem knowing where John McCain stood.

Later in my career, I testified before him on numerous occasions. Some of them were a walk in the park — when he agreed with my assessments of the resurgence of Russia, the need for more troops in Afghanistan and the danger of a rising China, for example. But when you were not in alignment with the Senator — and, eventually, when he became the Chairman of the powerful Senate Armed Service Committee — it could be a rough sea to sail. Although the son and grandson of four-star admirals, when he was grilling you in testimony, you would swear he was the progeny of drill sergeants. No one could lead a witness like Senator McCain, and his knowledge of the issues was unparalleled.

Overseas, he was regarded as a fundamental plank in the trans-Atlantic bridge. It is truly hard to imagine NATO or especially the prestigious Munich Security Conference (the Davos of international security) without John McCain. Not only was he a Lion of the Senate, he was a post–Cold War Lion of NATO, and the Alliance is a little less secure in its footing today. In that international world, he will also be missed for his willingness to call out the current President, who has been churlish in damning this American hero with occasional insult (“I like people who weren’t captured”) or faint praise. The constellation of American allies, from Colombia to Afghanistan to NATO to Japan will all miss his deep understanding of the importance of our network of allies, partners and friends.

All of that matters in understanding the man. But what is most important to me about John McCain — more than every other aspect of his long and eventful life — is how well he represented the seemingly forgotten center in American politics. We are so bitterly polarized today, but McCain could credibly reach out to both the left and the right. He could see both east and west, but he resolutely followed his own compass to true north. There are precious few in the American body politic who could claim that so truly as John McCain, and we are poorer for his passing in that regard above all else.

For all the times he flayed me in testimony or that I disagreed with some aspect of his views, I deeply honor the long voyage of his life and all that he stood for. He sailed true north through a long and vital life, and I hope to see him again across that distant sea we all must sail one day. 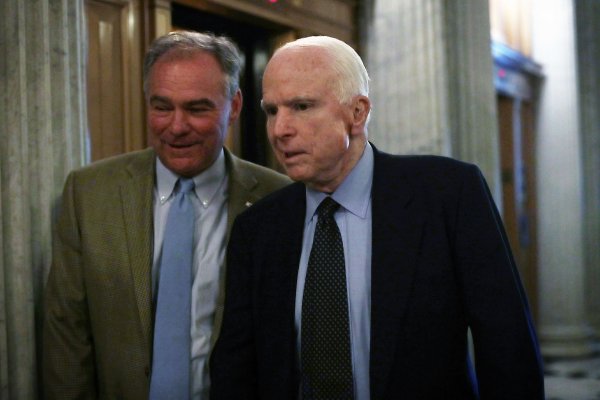 Sen. Tim Kaine: What John McCain Taught Me About Governing, Losing and Life
Next Up: Editor's Pick