What We Know About John McCain's Funeral Services

By Jamie Ducharme and Katie Reilly

Details about John McCain’s funeral services have been announced after the longtime Arizona senator died on Saturday. McCain, who died roughly a year after being diagnosed with an aggressive form of brain cancer, was 81.

McCain will lie in state in both the Arizona Capitol and the U.S. Capitol Rotunda on Wednesday and Friday, respectively, before his burial in a private service in Annapolis on Sunday, a McCain family spokesperson confirmed on Monday.

Here’s what we know so far about McCain’s memorial services and funeral, as tributes to the lawmaker and war hero continue to pour in.

Services will begin in Arizona on Wednesday

McCain will be memorialized at ceremonies in Arizona and Washington, D.C. this week. The late senator will first lie in state at the Arizona State Capitol, where a private ceremony will be held at 10 a.m. PST on Wednesday, which would have been McCain’s 82nd birthday.

“Only John McCain could rig a big birthday celebration for himself, like this,” McCain family spokesperson Rick Davis said at a press conference on Monday.

Former Sen. Jon Kyl, who has been discussed as a possible successor for McCain, will make remarks. And Sen. Jeff Flake will give a benediction. Members of the public will be invited to pay their respects at the State Capitol from 1 p.m. through 8 p.m. PST on Wednesday.

“I have reassurances that as long as there are people in line to file through to see John, the capitol will remain open,” Davis said Monday.

On Thursday, a memorial service will be held at 10 a.m. PST at the North Phoenix Baptist Church, where former Vice President Joe Biden and others will give tributes to McCain.

There will then be a small private ceremony at Sky Harbor Airport on Thursday, witnessed by active duty Arizona National Guard members, as McCain departs Arizona for the last time.

McCain will lie in state at the U.S. Capitol

McCain will lie in state at the United States Capitol in Washington, D.C., on Friday, where a ceremony will be held at 10 a.m. EST. House Speaker Paul Ryan, Senate Majority Leader Mitch McConnell, Vice President Mike Pence and Senate Minority Leader Chuck Schumer will present wreaths during the service.

Members of the public will be allowed to pay their respects from 1 p.m. to 8 p.m EST. McCain will become the 13th senator to lie in state in the Capitol Rotunda, an honor reserved for the nation’s “most eminent citizens,” according to the Architect of the Capitol.

“The nation mourns the loss of a great American patriot, a statesman who put his country first and enriched this institution through many years of service. The Senate is keeping Cindy, the McCain family, all John’s friends and staff, and the people of Arizona in our prayers at this tremendously difficult time,” McConnell said in a statement confirming the senator would lie in state at the U.S. Capitol. “I appreciate my colleagues and the entire Senate and House family’s assistance with this honor.”

On Saturday, the McCain family will escort the late senator along Pennsylvania Avenue to the Vietnam War Memorial, where they will place a wreath in his honor. At 10 a.m. EST, there will be another memorial service at the Washington National Cathedral “focused on his national and global leadership,” Davis said.

McCain’s office said a livestream will be available for the services at the North Phoenix Baptist Church, the U.S. Capitol and the Washington National Cathedral.

Former Presidents Barack Obama and George W. Bush — who both defeated McCain in presidential contests — are slated to speak at McCain’s service at the National Cathedral, Davis said at Monday’s press conference.

“These were bitter contests, both of them,” Flake told the AP. “To ask them to speak at your funeral, and for them to be honored at the opportunity, that tells you all you need to know.”

Both men have released statements honoring the longtime Arizona senator, with Bush calling him “a man of deep conviction and a patriot of the highest order.” Obama, in his statement, recognized McCain’s commitment to his country, writing that, “…we shared, for all our differences, a fidelity to something higher — the ideals for which generations of Americans and immigrants alike have fought, marched, and sacrificed.”

Despite those heartfelt sentiments, McCain reportedly wanted to keep his funeral simple, telling “60 Minutes” last year that the ceremony should include “a couple of people that stand up and say, ‘This guy, he served his country,'” CBS reports. And last year, during an appearance on The View, McCain said he’d like to be remembered as someone who “served his country” and was “proud of his family and his daughter.”

There will be one notable absence from McCain’s services, which President Donald Trump does not plan to attend. Trump and McCain frequently feuded, and McCain offered a veiled rebuke of Trump’s policies in a farewell letter released Monday.

“Despite our differences on policy and politics, I respect Senator John McCain’s service to our country and, in his honor, have signed a proclamation to fly the flag of the United States at half-staff until the day of his interment,” Trump said in a statement Monday afternoon, after facing criticism for raising the flag at the White House back to full staff Monday morning.

“I have asked Vice President Mike Pence to offer an address at the ceremony honoring Senator McCain at the United States Capitol this Friday,” Trump said in the statement, adding that he asked Chief of Staff John Kelly, Secretary of Defense James Mattis and National Security Advisor John Bolton to represent the Administration at McCain’s services.

McCain will be buried in the U.S. Naval Academy Cemetery

McCain will be laid to rest in a private ceremony on Sunday at the U.S. Naval Academy Cemetery in Annapolis, Md., according to McCain’s office. His grave site will overlook the Severn River and will be next to that of his old friend, Adm. Chuck Larson. 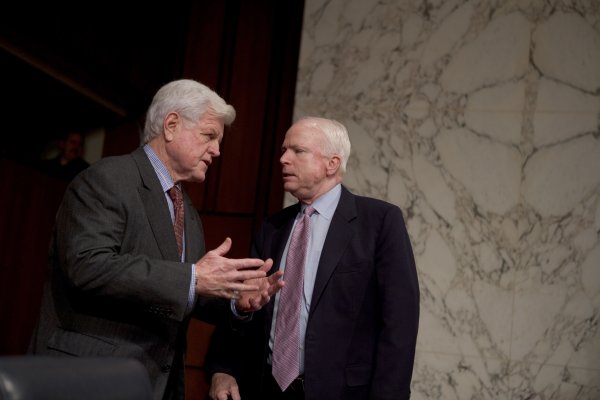