By Samantha Cooney and Gina Martinez

“Sadly the individual believed to be responsible for this murder is a illegal immigrant, making this an unfortunate reminder of why we need to strengthen our immigration laws,” she added.

Within hours of police saying that they had arrested an undocumented immigrant in her death on Tuesday, Tibbetts’ case became a hot political issue for advocates of tougher immigration policies — and a focal point for supporters of the President on a day when two of his former confidants were generating negative headlines. Tibbetts’ disappearance five weeks ago and the subsequent search garnered national attention — but the discovery of her body and the arrest of Cristhian Rivera, reportedly a Mexican national, played into Trump’s repeated claims that many immigrants are violent criminals. Despite this, there is no evidence that immigrants — legal or not — commit crimes at higher rates than citizens.

At a rally on Tuesday night, Trump did not mention the conviction of his former campaign chairman Paul Manafort or the guilty plea of his former fixer Michael Cohen. But he did call the country’s immigration laws a “disgrace” and made an apparent reference to Tibbetts. “You heard about today with the illegal alien coming in very sadly from Mexico. And you saw what happened to that incredible beautiful young woman,” he told supporters in West Virginia.

On Fox News, former Republican Rep. Jason Chaffetz said that he expects Tibbetts’ death will have more of an impact on voters than the other stories dominating Tuesday’s news: Manafort and Cohen. Former Republican House Speaker Newt Gingrich said that “if Mollie Tibbetts is a household name by October, Democrats will be in deep trouble.”

Iowa Gov. Kim Reynolds, a Republican, wrote on Twitter: We are angry that a broken immigration system allowed a predator like this to live in our community.”

Meanwhile, several memes that blamed immigration laws for Tibbetts’ death and called for the construction of a border wall have been shared many thousands of times on social media. One meme read: “In November, remember all the murdered Americans, and the illegal aliens that the Democrats care abut more than they want to protect you.”

Massachusetts Sen. Elizabeth Warren, a Democrat who is a considered a possible presidential contender in 2020, was criticized in Republican circles for her response to a question about Tibbetts on CNN Wednesday. When asked whether the case was proof immigration laws need to be stronger, she said she was “so sorry” for Tibbetts’ family. She then said, “One of the things we have to remember is we need an immigration system that is effective, that focuses on where real problems are.” She also mentioned the Trump Administration’s now-defunct family separation policy.

On Tuesday evening, Iowa law enforcement officials announced that they had charged Rivera, who they said lived illegally in the U.S. between four and seven years, with first-degree murder in the case. According to court documents, Rivera admitted he stalked Tibbetts when she was out for a run. He said he started to chase her and then his memory blacked out when she threatened to call the police. He said he later realized that she was dead in the trunk of his car, according to charging documents. He later led police to the spot in a corn field where he admitted to dumping Tibbetts’ body.

Rivera, who is 24 and reportedly from Mexico, worked at a dairy farm in Iowa owned by Dane and Craig Lang, the latter of whom is a prominent Republican who ran for the state’s Secretary of Agriculture earlier this year. Dane Lang said in a statement that Rivera “was an employee in good standing” who had been vetted by the federal government’s E-Verify system, which is meant to help employers ensure they hire only people legally allowed to work in the United States.

Rivera’s lawyer, Allen Richards, filed court documents Wednesday saying that arguing that Rivera’s employment — and Lang’s statement — show that he had been legally working in Iowa, according to the Des Moines Register.

Tibbetts’ case is not the only time the death of a white woman has become a rallying cry for supporters of tougher immigration laws. The case of Kathryn Steinle, a 32-year-old who was shot and killed in 2015 by an undocumented immigrant who had been deported multiple times, led to the U.S. House passing “Kate’s Law,” which increased penalties on immigrants with criminal records who are caught reentering the country. When a San Francisco jury acquitted Steinle’s killer — whose lawyers argued the gun went off accidentally — Trump tweeted about the case.

“The Kate Steinle killer came back and back over the weakly protected Obama border, always committing crimes and being violent, and yet this info was not used in court. His exoneration is a complete travesty of justice. BUILD THE WALL!”

Tibbetts family released a statement Wednesday thanking community members for their support, but did not address how her death had entered the political fray. However, some friends and family members have been speaking out on social media about using Tibbetts to make a political point.

Billie Jo Calderwood, who has been identified as Tibbetts’ aunt in local media, posted on Facebook, “Please remember, Evil comes in EVERY color. Our family has been blessed to be surrounded by love, friendship and support throughout this entire ordeal by friends from all different nations and races. From the bottom of our hearts, thank you.”

“This killer must be brought to justice. Let’s also remember that this is a crime committed by an individual, not a community,” Erika Andiola, an immigration rights activist who worked on former Democratic presidential candidate Bernie Sanders’ campaign, wrote on Twitter.

Wendy Feliz, a spokesperson for the American Immigration Council, told the Wall Street Journal: ”When an awful thing like this happens we don’t want to play a political game with it.”

Write to Samantha Cooney at samantha.cooney@time.com and Gina Martinez at gina.martinez@time.com. 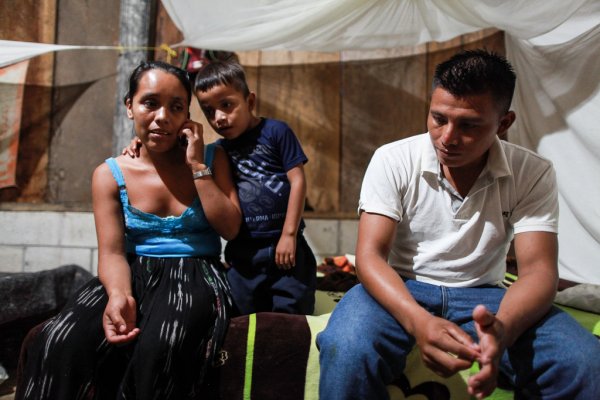 A Migrant Father Was Deported in May. His Son Is Still in a Shelter
Next Up: Editor's Pick