The news that Donald Trump’s personal lawyer had pleaded guilty to campaign finance violations he said he committed at the direction of the President raised anew serious legal and constitutional questions.

After Michael Cohen pleaded guilty in a federal courtroom in Manhattan to eight felonies, Trump’s critics again questioned under what circumstances the President could find himself in legal jeopardy, and what steps he could take to avoid trouble.

Many of these questions have been raised before as the investigation by Special Counsel Robert Mueller has moved closer to Trump’s top associates. But the answers remain cloudy.

Here’s a quick look at the constitutional issues raised by the controversies surrounding Trump.

Can President Trump be indicted?

Cohen admitted in court Tuesday that he arranged for two women to keep quiet during the 2016 election about alleged affairs with Trump, then submitted fake invoices to the Trump Organization to be repaid in violation of campaign finance law. He said that he did so “in coordination with and at the direction of a candidate for federal office” — Trump. That makes Trump an unindicted co-conspirator, a phrase most often associated with President Richard Nixon during Watergate.

But there’s a reason Nixon was not indicted: No one knows if doing so would be possible.

The text of the Constitution does not explicitly state whether a President can be prosecuted while in office, instead spelling out a mechanism for Congress to impeach and remove a President for “high crime and misdemeanors.” Though the Supreme Court heard arguments in 1974 about the issue in regards to Nixon, it never resolved the question and no court has ever ruled on it one way or another. In 2000, the Office of Legal Counsel wrote in a memo that a sitting President can’t be indicted because it would “impermissibly undermine” the ability of the executive branch to do its job, but constitutional experts disagree on the subject. In fact, one of Trump’s own former lawyers once argued that a sitting president could be indicted.

“It’s really not that much different from the investigation,” says Saikrishna Prakash, a professor of constitutional law at the University of Virginia law school and a senior fellow at the school’s Miller Center of Public Affairs. “The indictment often follows an investigation. It doesn’t have any consequences for him serving as President.”

That said, there’s nothing that would prevent Trump from being charged after he left office.

Read More: When Can You Sue the President?

Can President Trump pardon himself?

If the President were indicted, the next question is whether he could pardon himself. Trump himself has raised this question, asserting on Twitter that he has the “absolute right” to do so. Trump’s lawyers, Jay Sekulow and John Dowd, made a similar argument in a 20-page letter to Mueller in January, claiming that the Constitution allows the President to “terminate the inquiry, or even exercise his power to pardon if he so desired.” (They did not explicitly state that Trump could pardon himself, but the wording of the letter leaves open that possibility.)

Again, the question was explored during the Nixon Administration. A 1974 memo from the Office of Legal Counsel stated that the President cannot self-pardon based on the longstanding legal principle that no person can be their own judge, though the Supreme Court has never ruled on the issue.

But if the constitutional answers about Trump pardoning himself are unclear, the political ones are fairly straightforward.

Saikrishna Prakash, a constitutional law professor and fellow at the University of Virginia’s Miller Center of Public Affairs, says that a presidential self-pardon “would be an act of self-immolation.” “It would suggest his guilt,” he says.

A survey in June from Morning Consult and Politico found that 58% of registered voters said that they do not believe the President even has the ability to pardon himself. Trump’s own lawyer, Rudy Giuliani, said that while the President “probably” has the power to pardon himself, he has “no intention” of doing it, in part because it “would probably lead to immediate impeachment.”

Minutes after Cohen pleaded guilty Tuesday, the President’s former campaign chairman, Paul Manafort, was found guilty on eight counts of bank and tax fraud following a 12-day trial in the Eastern District of Virginia. Manafort’s case did not specifically relate to the President or Russian interference in the 2016 presidential election, but it was spurred by Mueller’s investigation — which the President has repeatedly referred to as a “witch hunt.”

In a tweet Wednesday, Trump called Manafort a “brave man” and said he felt “very badly” for him and his family, again raising questions among his critics about whether Trump intends to pardon his associates who have been convicted of crimes. (A lawyer for Cohen, who has had a very public falling out with Trump, has said he would “under no circumstances” accept a pardon.)

White House Press Secretary Sarah Huckabee Sanders said Wednesday that a pardon for Manafort has not been “up for discussion.”

Whether a person’s crimes implicate Trump or not, the President still has the power to pardon. Article II, Section 2 of the Constitution stipulates that Presidents “shall have the power to grant reprieves and pardons for offenses against the United States, except in cases of impeachment.”

This sweeping presidential power was created as an additional step in the system of checks and balances. It was seen by some Founding Fathers as a reprieve for certain offenders; as Alexander Hamilton wrote in the Federalist Papers, pardoning “the insurgents or rebels may restore the tranquility of the commonwealth,” for example. George Washington did just that, pardoning two men sentenced to hanging for their role in the Whiskey Rebellion.

Trump himself has employed the power to pardon conservative commentator Dinesh D’Souza, who pleaded guilty for campaign contribution limit violations in 2014, and the controversial former Maricopa County sheriff Joe Arpaio, a supporter of the President who pleaded guilty to criminal contempt of court last year.

Legally, Prakash says, there are no limits on a presidential pardon, but that doesn’t necessarily mean Trump can use the power with impunity. Constitutional scholars note that offering a pardon in exchange for a bribe would be clearly illegal, while some argue that an improper pardon could be considered evidence in an obstruction of justice case against the President.

“If firing someone can be obstruction, so can pardoning someone,” Prakash says. “They might clamp up and not reveal whatever information they have to a prosecutor.”

“Of course he’ll be hammered for pardoning his friends,” he adds. “But he still might choose to do so.”

Since Mueller, the former FBI director, was appointed as special counsel, there have been questions about whether Trump might try to fire him, especially each time that Trump has renewed his criticism of the investigation and top Department of Justice officials overseeing it.

Trump does not have the authority to directly fire Mueller, but he does have the power to compel someone else to do it for him.

Still, it’s possible that Rosenstein could resign — as he reportedly threatened to do following the firing of former FBI Director James Comey — or be fired by the President, possibly leading to what is referred to as a “Saturday night massacre” situation in which Trump keeps firing people at the top of the chain of command at the Justice Department officials until one agrees to end the investigation, a tactic used by Nixon.

Some constitutional lawyers argue the President could bypass these special council regulations, using his authority as chief executive. One prominent conservative scholar has even advanced a controversial legal theory that Mueller’s appointment is unconstitutional because he was not confirmed by the Senate.

Again, the constraints on Trump firing Mueller are more political than constitutional.

“If he fires Mueller, he’s just opening another avenue for obstruction of justice,” says Prakash. “There’s a reason why he hasn’t fired this guy yet or tried to.”

Could President Trump be impeached?

As with any President, it is possible Trump can be impeached while serving in the White House. (But, to be clear, getting impeached doesn’t necessarily mean Trump will be removed from office.)

The Constitution gives Congress the right to pursue impeaching a President on the grounds of “treason, bribery or other high crimes and misdemeanors.” The complicated political process can be explained by the different roles of House of Representatives and the Senate.

The House is responsible for the actual act of impeaching a President. The House can vote on one or several articles of impeachment. A Pesident will be impeached if a majority representatives votes to do so.

But that doesn’t remove the President from office. After a majority vote from the House, the case moves to the Senate, where the President face its members in a trial presided by the Chief Justice of the United States, which is currently Justice John Roberts. Two-thirds of the Senate must vote to convict the President in order to remove him or her from office.

Though two Presidents have been impeached, no President has been removed from office as a result of the following proceedings. Former Presidents Bill Clinton and Andrew Johnson — who were impeached about 130 years apart — finished their terms in office. And Nixon resigned in 1974 before he could be impeached.

It would take a serious, evidence-based effort to impeach Trump (or any President for that matter), as experts have told TIME. Indeed, House Democrats introduced articles of impeachment against Trump last year, despite doing so in a Republican-majority House and Senate. Democrats, however, have largely avoided discussing impeachment as a possibility as the party heads into the midterm elections with aim on recapturing the House.

— With reporting from Tessa Berenson 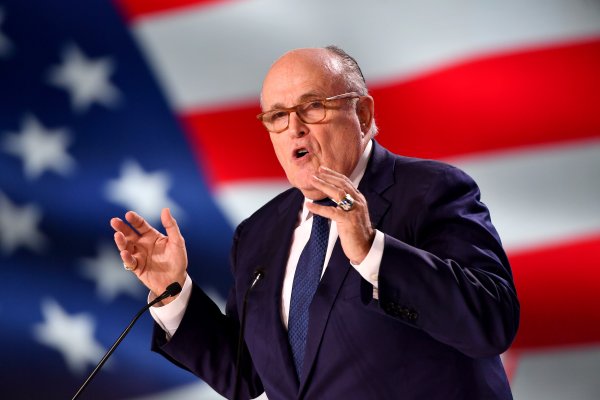