The Story Behind TIME's 'In Deep' Donald Trump Cover

For the cover of the Sept. 3, 2018, issue of TIME, readers might notice something familiar. TIME collaborator Tim O’Brien, an artist who has been creating TIME covers for nearly 30 years, has added the next illustrative step visualizing the mounting troubles facing President Trump. The third cover in O’Brien’s series features a flooded Oval Office with the president floating above the water line.

The depiction follows the convergence of multiple distressing storylines for the president this week. First among them: Trump fixer and former personal lawyer Michael Cohen’s claim that the president directed Cohen during the 2016 campaign to pay off two women to prevent them from speaking out about affairs they had with Trump.

O’Brien says for this third cover whether Trump “would still be at his Resolute desk or not,” says O’Brien, a Brooklyn-based artist whose more than two dozen TIME covers over the years, include subjects ranging from the Catholic church to Osama Bin Laden. “I felt that it was too comical or perhaps morbid to see him sitting there. But to have him at the top suggests he’s still fighting despite the deepening issues.”

“When I painted the ‘Nothing to See Here’ cover art, like many, I assumed the level of chaos could not last,” says O’Brien, who used air brush, pencil, gouache and oil paint to create the original piece, published in February 2017. But, he adds, “as the never-ending flood of breaking news washed over the White House, and the firings, the scandals and the general mayhem filled each news cycle, I felt the storm metaphor was as relevant as ever.”

For the April 23, 2018, issue of TIME, after the raids on Cohen’s office and home, O’Brien created a second cover.

While the magazine has also created a handful of other covers that visually reference previous ones, and TIME’s iconic “X” treatment has run multiple times, O’Brien’s cover this week marks the first series of three covers created by TIME in its 95 year history.

Outside of his 28-year relationship with TIME, O’Brien has created work which has appeared in publications all over the world, as well as several on U.S. postage stamps including the popular Hunger Games trilogy.

Two of his TIME magazine covers – one with Bill Clinton and Bob Dole and the other with the “Grand Old Populists,” both published in 1996 – reside in the National Portrait Gallery at the Smithsonian in Washington, D.C.

Read more: See every TIME magazine with Donald Trump on the cover 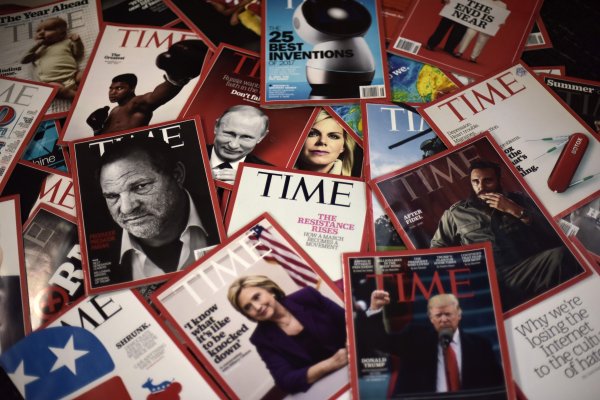