Videos of Turkish people smashing, shooting and setting fire to iPhones have gone viral online in recent days, in a show of support for Turkish President Recep Tayyip Erdogan, who called for a boycott of Apple products in response to new tariffs and sanctions imposed by President Donald Trump.

One video shows a man in front of a Turkish flag addressing Trump directly, asking “Who do you think you are?” before taking a sledgehammer to five iPhones handed over by boys kneeling behind him.

“If you threaten us with hunger you will only make us laugh,” he added.

Another shows someone shooting an iPhone at close-range with a handgun. Others show various blunt objects – as well as fire and bare fists – being used to destroy iPhones.

A growing spat between the Turkish and American governments over jailed American pastor Andrew Brunson ramped up on Aug. 10, when Trump announced the doubling of steel and aluminum import tariffs – in addition to sanctions on members of Erdogan’s cabinet imposed earlier this month.

In response to that news, which sent the Turkish currency tumbling, Erdogan said he would impose his own retaliatory sanctions and called for a boycott on American products, specifically mentioning the tech giant Apple.

“If they have iPhone, there is Samsung on the other side. And we have our Venus and Vestel,” he said in a speech, referring to the Turkish smartphone Vestel Venus.

“We are going to produce enough for ourselves. We have to serve better quality goods than we are importing from them.”

Brunson has been jailed in Turkey for the past two years, on charges of being allied to a Kurdish militant group and facilitating the planners of a failed 2016 coup in which Erdogan narrowly avoided being overthrown.

The U.S. government says Brunson is innocent, and that he is being held for political reasons. Erdogan wants a cleric currently in self-imposed exile in America, Fethullah Gulen, to be extradited to Turkey to face allegations of planning the coup, however the U.S. has not cooperated with Turkey’s extradition requests. 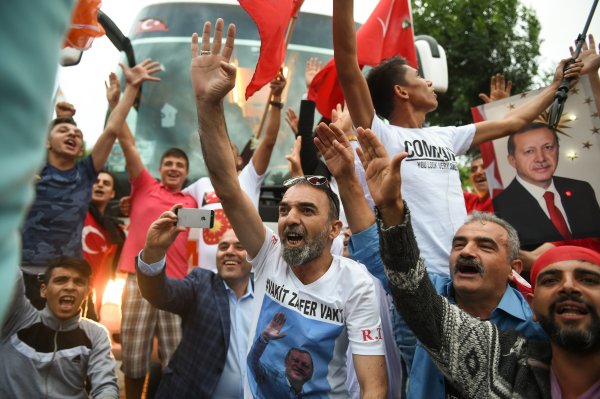