On his latest show, Jimmy Kimmel took a deep dive into the world of ASMR and the kids who love it. As one child explains to Kimmel, ASMR “stands for autonomous sensory meridian response” and is identified by “a tingling sensation that starts at the neck and goes down the spine and comes back, due to some sounds.” It’s supposed to be a soothing experience and can even put you to sleep, the kids suggest. (There is some scientific backing to the phenomenon.)

Kimmel seems skeptical, but he gamely dives in to watch some popular YouTube videos that the kids these days like; there are an estimated 13 million or more of these videos on YouTube. First they watch a guy tapping and shaking a bunch of different objects rhythmically.

“And this is relaxing to you? Because I feel like I’m gonna freak out,” the comedian responds; while his younger guests say they are experiencing those “tingling sensations,” Kimmel definitely can’t get into it. “I have a headache,” he complains. “I feel like I’m going to join a cult and he’s going to be my leader.”

They also watch a girl whispering very softly and another tapping on a container of Play-Doh for a long time before discovering a video that involves squishy, stretchy slime.

“When I was a kid, we had three, maybe four channels… And we were forced to watch things,” Kimmel reminisces. “Now you guys have millions and millions of channels to choose from, and what you’ve chosen to watch is somebody putting a wig on a camera and brushing the camera’s hair.” (Hair-brushing is another popular ASMR activity.)

Ultimately, Kimmel is nonplussed. “Kids are weird, is I think what I’ve learned tonight,” he concludes. Sounds about right. 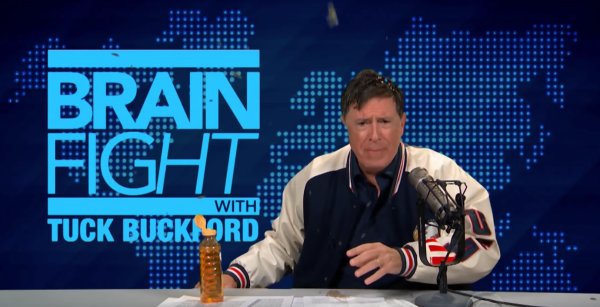 Stephen Colbert Obliterates Alex Jones With His Rant Impression
Next Up: Editor's Pick