Britain Is Preparing For a ‘No Deal’ Brexit. Here’s What That Means

Queen Elizabeth II has agreed to suspend parliament in the the run up to the Brexit deadline of Oct. 31, the British government announced Wednesday.

The news prompted some critics to blame Prime Minister Boris Johnson (whose request the Queen approved) of attempting to stifle democratic debate and pave the way for a “no deal” Brexit on Halloween.

If lawmakers fail to agree on a deal, Britain would withdraw from the E.U. on Oct. 31 without any of the trade, customs and regulatory measures designed to smooth Britain’s transition.

So what is a “no deal” Brexit, how likely is it, and what would it mean for Britain?

Does Britain need a deal?

Britain’s economy is closely tied to the E.U.’s. The bloc is Britain’s biggest trading partner, accounting for 44% of all U.K. exports. As a member state, Britain can trade with other members unburdened by customs checks or tariffs. Common regulations mean goods do not have to be examined when they cross borders. But when Britain leaves, those things will change.

To decide just how, Boris Johnson’s predecessor Theresa May negotiated a deal with Brussels on Britain’s exit terms.

May secured a 21-month ‘transition period’ as part of the negotiations, giving Britain time to pursue free trade deals with other countries around the world while still being able to trade seamlessly with Europe. But three times, British lawmakers rejected the deal May forged with European negotiators.

In short, it means the transition period May negotiated will not come into place — and Britain will face an uncertain future from Oct. 31.

Without a deal, U.K. trucks arriving from the E.U. will face customs checks the day after Oct. 31. It might mean exports from the U.K. are subjected to stricter examinations at ports, to check they comply with strict E.U. regulations. The increased costs to companies will almost certainly mean lines at ports, shortages in shops and raised prices across the board.

Roughly 30% of the food Brits eat daily comes from the E.U., much of it fresh. If Britain fails to secure an exit deal, the risk is that supply chains designed to put fresh food in stores within hours will grind to a halt on Oct. 31.

Without common regulations, Europeans will have no guarantee that British products have been manufactured to the E.U.’s strict standards. And with Britain no longer enjoying free trade with the E.U., goods flowing in each direction will have to be tracked.

The result of that could be food rotting in the backs of trucks and reduced choice – and increased prices – for British consumers. When the former Brexit Secretary, Dominic Raab, suggested there would be “adequate food” if grocery chains made stockpiling plans, he was dismissed as naive by many in the industry who said there was simply no space to do so. When Johnson became Prime Minister, he promoted Raab to Foreign Secretary.

Why are some lawmakers advocating leaving without a deal?

In the 2016 Brexit referendum, and in the most recent U.K. election in 2017, no party campaigned to leave the E.U. without a deal.

But today, Johnson is advocating leaving on Oct. 31 “do or die,” or in other words, with or without a deal. He and his allies have said that one Brexit delay (the U.K. was initially scheduled to leave on March 29) is enough, and that it would amount to a betrayal of the public if it happened again.

He maintains that he would prefer to strike a deal with the E.U., but many of his allies say that Britain could simply walk away without a deal at all. The result of that would be reverting to World Trade Organization (WTO) rules – those that govern international trade in the absence of bilateral or multilateral deals.

Critics say that Britain would be the only large country in the world to trade with the E.U. on WTO rules, and warn that it would introduce huge uncertainty for businesses. One study found U.K. trade with the E.U. solely on WTO rules would fall by 40% in ten years. “I think the Brexiteers assume there’s a whole bunch of rules out there which we can immediately default to,” says Tim Bale, a professor of politics at Queen Mary, University of London. “Whereas in fact, those rules are rather more negotiable.”

Customs and regulatory problems could hit medicines too. In July 2018, French pharmaceutical company Sanofi said it was stockpiling medicines in Britain to prepare for supply disruptions in the event of a ‘no deal’ Brexit, increasing stocks from 10 to 14 weeks’ worth. And Britain’s National Health Service said it would be doing similar for necessary drugs and blood supplies.

One in five businesses would consider relocating to Europe if Brexit negotiations deteriorate, according to a report released by Britain’s Institute of Directors last August.

And the value of the pound could drop further, too. The value of £1 slid from around $1.30 in March 2019 to a low of $1.20 in August 2019 as traders weighed up the increasing political risk of a “no deal” Brexit. It could slide further if no deal becomes a reality.

What are the politics behind preparing for a ‘no deal’ Brexit?

Boris Johnson has publicly stated that Britain preparing for a no deal Brexit would incentivize the E.U. to give Britain a better deal.

“Whether you think that’s a particularly convincing negotiating strategy depends on how prepared you think the U.K. actually is for that scenario,” says Bale. 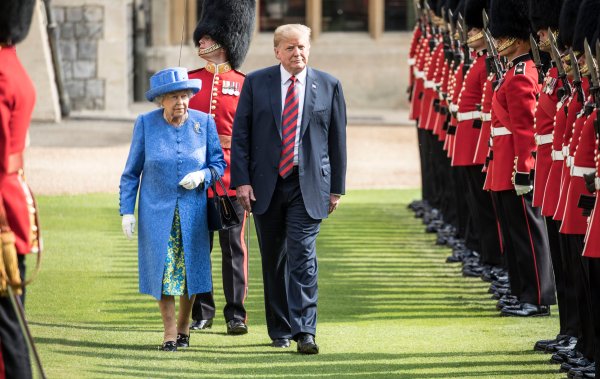 President Trump Reveals Details of Private Talks With Queen
Next Up: Editor's Pick