The True Story Behind BlacKkKlansman, According to the Man Who Inspired the Movie

This interview contains spoilers for the film BlacKkKlansman

This weekend marks two contradictory occasions. On Sunday, one year after the Unite the Right Rally in Charlottesville, Va., turned deadly, a “White Civil Rights” rally is scheduled to take place in front of the White House. A state of emergency has already been declared in Charlottesville for the anniversary of the event that white separatist David Duke called a “turning point,” for those who “want to take their country back.”

Meanwhile, Friday marks the release of Spike Lee’s BlacKkKlansman, in which footage from the 2017 rally is woven into a story about an African-American policeman who, in the late 1970s, posed as the leader of a Ku Klux Klan chapter and successfully tricked Duke into believing it.

The movie is based on the real story of Ron Stallworth, the first African-American police officer and detective in Colorado Springs, Colo., who masterminded an undercover investigation into the local KKK chapter in 1978-9. After answering the local chapter’s recruitment ad in the newspaper, Stallworth (played in the film by John David Washington, Denzel Washington’s son) sends his colleague (Adam Driver) to the meetings in his place, while he himself chats up Duke, then the Grand Wizard of the Knights of the Ku Klux Klan (played by Topher Grace), over the phone. Duke hasn’t the slightest hint of what’s going on — even when Stallworth gets assigned to be his bodyguard during a visit to Colorado Springs. He later turned his experiences into a memoir called Black Klansman, and became an expert on collecting intelligence on gangs.

TIME spoke to Stallworth, 65, about what it was like to conduct this unique investigation, and what the movie gets right and wrong about his story.

What did you think of the movie? Does it get your story right?

The movie did justice to the story, but the writers created tension that did not happen. They [the Klansmen] talked about bombing two gay bars, but there was no actual bombing that took place during my investigation. And [Laura Harrier’s character] Patrice is a fictitious character.

And I was actually running two investigations at once: the Klan investigation and an undercover investigation of the Progressive Labor Party. I’d talk on the phone to one of my Klan buddies, find out information on what they were doing, and then hang up from him and go to a Progressive Labor Party meeting. I’d bounce back and forth from one investigation to another. When the Progressive Labor Party would plan a counter-protest march against my Klan buddies, and I would go to a Klan meeting and hear what their response was going to be to the counter-protest march. Then I called the police departments in other cities where they were going to do this and notified them about what was going to happen so they could marshal their forces. On more than one occasion David Duke would go to those cities and he’d tell me on the phone that he was surprised when he got there how well-organized the police were for their march, and they weren’t able to do all of the things they wanted to do because of it. Well, they were well-organized because I had notified the police in advance.

In your book, you talk about cross-burnings…

During in the seven-and-a-half months of my undercover investigation [of the Klan] there were no crosses burned; we prevented three of them.

I was invited to participate in two of them. I’d get details from Ken O’Dell, leader of the Colorado Springs Klan chapter — where they were going to go, how many [people were attending], what they would be driving. Then I’d notify my dispatcher and extra [police] cars were directed over to that area. We didn’t have cell phones, so I’d find out 24 hours later that a cross-burning had been canceled because they [the Klansmen] saw all of these police cars present, and they thought it was too risky.

In both the movie and your book, a point is made that members of Klan whom you monitored were also in the military. What were your takeaways from that overlap?

We were alarmed by the fact that there were military personnel [in the chapter]. That was one thing that we learned, that the Klan was making an active recruitment pitch to the armed forces — not just in Colorado Springs, but in other parts of the country as well. With trained military personnel who share that ideology, you know you have a valuable soldier at your disposal. Gang members are doing the same thing today.

During your investigation, you initially reached the Knights of the Ku Klux Klan Grand Wizard David Duke directly on the phone when you called to expedite the shipment of your membership card, but after that you’d periodically call him and chat. Did you learn anything about him that might surprise people?

He was a very nice guy in person. A very pleasant conversationalist. The problem with David is he can’t go very long without talking about race and the minute he gets on the subject of race, Dr. Jekyll becomes Mr. Hyde and the monster in him is unleashed. He just can’t do it.

Duke served in the Louisiana House of Representatives from 1989 to 1993. What’s your reaction to seeing him run for various political offices?

How did he find out?

In 2006, when I retired from law enforcement in Utah where I had spent the last 20 years of my career, a local reporter wrote about my career and focused her story on the Klan investigation. Her story went viral, and one of [the follow-ups] was from Miami Herald columnist Leonard Pitts. In the process of writing a column about me, he contacted David Duke and asked about the validity of that story. Duke said, “It’s not true. He’s a liar.” Pitts said, “If he’s lying, then why does he have a membership card signed by you?” And then Duke changed his answer and said, “Well we didn’t do anything illegal, so what’s the big deal?”

Which is not really how it’s shown in the movie.

That last scene is a composite of events; the time sequence is altered. I never identified myself because I was ordered not to have contact with him. But I did call him a day or two after I was his bodyguard in Colorado Springs, and he proceeded to rant and rave about this [n—] cop. The whole time my sergeant and I were laughing at him. The sergeant, red in the face, fell out of his chair once or twice. He had to run out of the office to catch his breath.

In your book, you talk about growing up in a multiracial community in El Paso, Texas, and how because of that, the civil rights movement felt like “a TV show.” Was there a moment in your life when you encountered racism in a way that changed your view?

As a black man in America you experience racism all the time, but to say that there was a turning point, no. You learn to deal with it and live with it. It’s a fact of life of being black in America.

I was raised by my mother, who like many mothers who raised black children back then, told me that if somebody called me a [n—], I’d better hit them in the mouth and make them respect me. I remember asking my mom, “What if they’re bigger than me?” And she said you grab the biggest brick and you knock them upside the head, and you let them know you’re not a [n—], you’re a human being, and you won’t tolerate being called that. When I got called that and fought over it, my mother’s only response was, “Did you whip his ass?”

The movie also addresses police brutality against African-Americans, and the corresponding distrust in the other direction. How has the national conversation about that issue changed between then and now?

Today, it’s ridiculous. Almost every week you hear about something happening, police abusing their authority, shooting and attacking minorities, for no justifiable reason. The black community has always complained about abuse from cops. It’s nothing new. But now more people are seeing visual examples of what they’ve been complaining about. That’s one thing that has changed over time.

Compared to when you did it, do you think it’s easier or harder today to police white supremacist groups like the KKK?

The investigation I did can never be done again. We live in a technological age where you can easily find out whether someone’s a cop or other such information that you couldn’t find out back then. 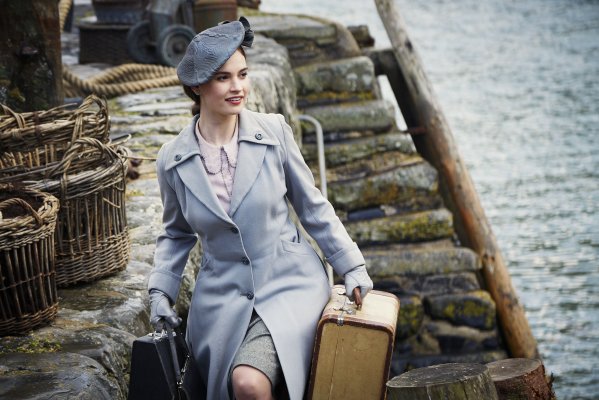 The Guernsey Literary and Potato Peel Pie Society’s Post-War Romance Is Sweet as Pie
Next Up: Editor's Pick