The 10 Most Unforgettable Awards Show Mishaps of All Time

There’s almost nothing that lends itself to the opportunity for a very public mishap more than live TV. And during awards shows, that goes double.

Whether it’s because of a mix-up backstage or a more offensive blunder, there’s often no telling how annual celebrations like the Oscars, and the Grammys will go down.

So as the 91st Acdademy Awards and the 61st Grammy awards approach, here’s TIME’s take on the 10 most unforgettable awards show mishaps — from “Adele Dazeem” to Taylor Swift getting interrupted by Kanye West.

When nature called at the 2014 Brit Awards, Harry Styles had no choice but to answer. Unfortunately, the call came moments before One Direction was announced as the winner of the Global Success Award and left Styles’s fellow bandmates to awkwardly take the stage without him. Styles eventually made it to the podium, but was clearly out of breath as he tried to explain his absence. “I’m really sorry, I was having a wee,” he offered. “The toilets are ages away.”

Combining the titles of the Best Picture-nominated Hidden Figures and Fences was an unfortunately common error during the 2016-2017 awards season. On the red carpet, NBC’s Jenna Bush Hager mashed up the movies while speaking to Pharrell, who helped compose the Hidden Figures score. But Michael Keaton repeated the mistake during the broadcast, garbling the two together while presenting the Golden Globe for Best Supporting Actress in a Motion Picture for a more memorable mix-up. Keaton said that he had simply misread the teleprompter. However, the multiple instances that people conflated two movies with predominantly black casts was widely criticized.

“I screwed the line up. I was nonchalant about it. I actually, now, I totally understand,” Keaton told reporters later that week at the premiere of his film The Founder. “It makes me feel so badly that people feel badly. If somebody feels badly, that’s all that matters.”

Granted a “permanent place in the annals of Oscar embarrassments” by the New York Times, the opener of the 61st Academy Awards ceremony holds a special place in awards show mishaps history. The over-the-top 15-minute opener featured Rob Lowe performing an extended duet of “Proud Mary” with Snow White—a.k.a. new actress on the block Eileen Bowman. The resulting debacle not only earned the Academy a lawsuit from Disney but prompted 17 of Hollywood’s biggest stars of the moment—including Paul Newman, Julie Andrews, and Gregory Peck—to sign an open letter blasting the broadcast as “an embarrassment to both the Academy and the entire motion picture industry.”

“Look, the Academy asked me to take that role so I was a good soldier and did it,” Lowe told the Times in 1992. “You can’t be your own manager and agent and soothsayer—you have to take risks. And on that one I got shot in the foot.”

Adele Dazeem, or as some may call it, the mispronunciation to end all mispronunciations. When John Travolta took the stage at the 2014 Oscars to introduce Idina Menzel for a performance of Frozen‘s Oscar-winning song “Let It Go,” it became painfully clear that he had no idea how to say her name. Luckily, Menzel didn’t let his mistake faze her for a second, and everyone wanted their name “Travoltified,” which gave birth to the The Adele Dazeem Name Generator.

The 2011 BET Awards took a turn as soon as guest presenter Tiffany Green announced Chris Brown as the recipient of the Viewers’ Choice Award only to then declare Rihanna was the actual winner. Drake took the stage to accept the award on Rihanna’s behalf, but considering Brown had plead guilty to felony assault of Rihanna just two years earlier, there was no going back.

“The tablet f—kin said CHRIS BROWN….the TELEPROMPTER said Rihanna. What the F—k??????” Green later tweeted, referring to the tablet that she was supposed to read the winner’s name from.

In the end, host Kevin Hart clarified that Brown was the intended recipient of the award.

BET executive Stephen Hill eventually took the fall for the mistake. “That BET Awards Viewer’s Choice mix-up was due to human error,” he wrote in a tweet. “And I was the human that made that error. I apologize to ALL affected.”

Everyone’s made this fumble before, just not before so many eyeballs. Leave it to a performer known for being relatable to do the relatable thing. Moments after she was announced as the winner of the Oscar for Best Actress at the 2013 Academy Awards, Jennifer Lawrence experienced what is likely every actor’s worst nightmare: falling on the Dolby Theatre steps. Fortunately, J-Law being J-Law, she managed to recover pretty smoothly. “You guys are only standing up because I fell and you feel bad,” she quipped as the audience gave her a standing ovation.

Michael Jackson accepts the Artist of the Millennium award

Considering the VMAs have no such thing as an Artist of the Millennium award, it was more than a little awkward when Michael Jackson delivered a speech accepting the imaginary honor at the 2002 show. The confusion began when Britney Spears referred to Jackson as her “artist of the millennium” while presenting him with a 44th birthday cake. The King of Pop took Spears’ words a bit too literally and a cringeworthy scene ensued.

“When I was a little boy growing up in Indiana if someone told me I’d be getting the Artist of the Millennium award, I’d never have believed it,” Jackson memorably opened.

Who could ever forget the agonizing moment that Steve Harvey crowned the wrong Miss Universe in front of thousands of spectators and millions of viewers watching the live telecast of the 2015 pageant? Harvey initially announced Miss Colombia Ariadna Gutiérrez as the winner before realizing his mistake and conceding that the Philippines’ Pia Alonzo Wurtzbach was the real queen.

“I’d like to apologize wholeheartedly to Miss Colombia & Miss Philippines for my huge mistake,” Harvey tweeted following the show. “I feel terrible.”

“Yo, Taylor, I’m really happy for you and I’mma let you finish, but Beyoncé had one of the best videos of all time.”

Kanye West uttered this infamous interruption after grabbing the mic from Taylor Swift as she was accepting the award for Best Female Video at the 2009 VMAs, igniting a feud that continues to fuel media coverage to this day. Beyoncé—who ended up winning Video of the Year for “Single Ladies (Put a Ring on It)”—later invited Swift back up on stage to finish her speech, but the damage was certainly done.

This one may take the cake. In spite of that ill-advised bus tour bit, the 2017 Academy Awards were relatively uneventful. That is, until it came time for the biggest award of the night. Presenters Warren Beatty and Faye Dunaway announced La La Land as the winner of Best Picture and the team behind the musical dramedy took the stage. Unfortunately, moments later it was revealed that there had been an envelope mix-up backstage and the Oscar was actually intended for Barry Jenkins’s Moonlight. Talk about awkward. 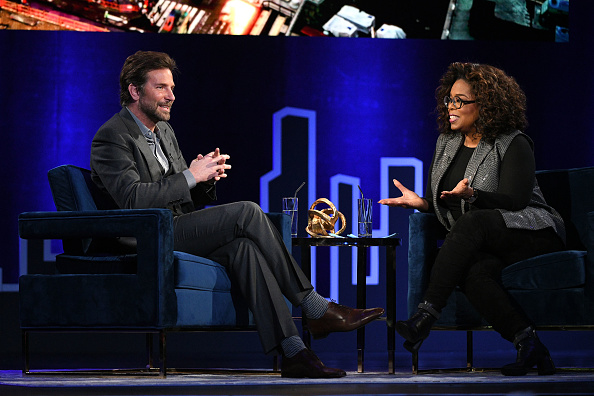 Bradley Cooper and Oprah Really Got Somewhere With This SuperSoul Conversation
Next Up: Editor's Pick