California's Wildfires Are Spreading Faster and Burning More This Year. Experts Say It 'Can Only Get Worse'

California’s sweltering heat and deadly fires this month are no coincidence.

Triple-digit temperatures are fueling fast-moving, aggressive wildfires across the Golden State at a pace that far out-does that seen at this point in a typical season, fire experts tell TIME. More than 1,000 wildfires have been sparked in a one-week period in July — that’s more than three times the average 250 or 300 that begin each week at this point in the season, according to the California Department of Forestry and Fire Protection, or Cal Fire. Tens of thousands of more acres have burned across the state this year than at this point in 2017, which was one of the most destructive fire seasons in state history.

A seemingly never-ending heatwave has put many cities in the state on track to set records in July — and that’s just part of the issue. Each year brings some new heat record in California, and the accumulation of year after year of sweltering summers has created dry grass, brush and millions of dead trees that spread fires at explosive rates. And this summer in particular, heat waves have exacerbated the issue.

“What it really means is that whatever fires get going spread more quickly and burn more intensely. So it changes the character of wildfire,” says Daniel Swain, a climate scientist at the University of California, Los Angeles.

Take the Carr Fire, the largest and most destructive fire of the year so far. It began last week after a vehicle malfunction sent sparks into the foothills of the Shasta-Trinity National Forest in Northern California. But within days, the inferno exploded, spreading to the city of Redding, where it has already destroyed more than 1,000 homes and buildings and taking the lives of at least six people.

The intense heat has taken hold of Redding in particular for more than a month and a half, says Scott McLean, deputy chief of Cal Fire. A hot summer isn’t unusual, he says. It’s the consistent heat wave that is.

“The Carr Fire started by just sparks,” McLean says, “and now look what we have.”

By Tuesday morning, the fire scorched more than 110,000 acres, easily ranking as one of the largest fires in state history — and the blaze is only 27% contained. What sets the Carr Fire apart from others on that list, however, was the absence of aggressive winds that typically fuel a fast-moving fire. Instead, “it developed its own extreme weather conditions,” Swain says, creating a rare “apocalyptic” weather pattern that appears like a fire tornado that is fueled, in part, by extreme temperatures.

Those same temperatures have created hoards of dry brush and grass, making more fuel for a fire to burn through quickly. Intense heat has dried out the typically damp vegetation in the understory of a forest. “There’s nothing to stop a fire; almost everything becomes flammable when conditions are this extreme,” says Jessica Halofsky, a fire research ecologist at the University of Washington.

The extreme heat has also caused firefighters to change their tactics over the years. Not only are the days hotter, but, so are the nights, says Swain. Those typically cooler hours are critical in fire-suppression efforts, allowing firefighters to get closer to the flames. But the temperatures aren’t falling as much as they used to, Swain says, and “that does directly play into fire behavior at night.”

Rising temperatures aren’t the only reason fires have grown in size and aggression, though scientists are quick not to place blame entirely on climate change. Urban development in vulnerable areas can make fires more devastating, and many of the state’s most destructive fires were started by humans including the Carr Fire. Max Moritz, a specialist in cooperative extension at the University of California’s Division of Agriculture and Natural Resource, says hotter temperatures have made fire seasons longer, too. Scientists see a direct link between rising temperatures and the amount of dry brush and ample fuel, which makes the fires fast-moving and often more explosive.

No matter how damp a winter may be, a hot summer could dry out or kill vegetation and become easier to burn. Last year, the state had a wet winter — a rarity that came after a several years-long drought that Gov. Jerry Brown had declared was finally over. California still experienced its hottest summer on record several months later — and saw its largest fire ever scorch Napa, Sonoma and Lake counties in Northern California. This past year, the winter was unseasonably dry, and experts say that means the 2018 fire season could grow more intense.

“We don’t have what we need,” says McLean, of Cal Fire. “California overall needs to have several years of significant weather in the winters to bring it back on the plateau.”

Craig Clements, an associated professor at San José State University who works at the school’s Fire Weather Research Laboratory, says vegetation throughout the state already has low moisture levels heading into August. For fires, October, which sits just before an ideally wet winter, is typically the month where grass, trees and brush are at its driest points. That, combined with those late summer and early fall winds that hit California, could cause more aggressive fires.

“It can only get worse.” 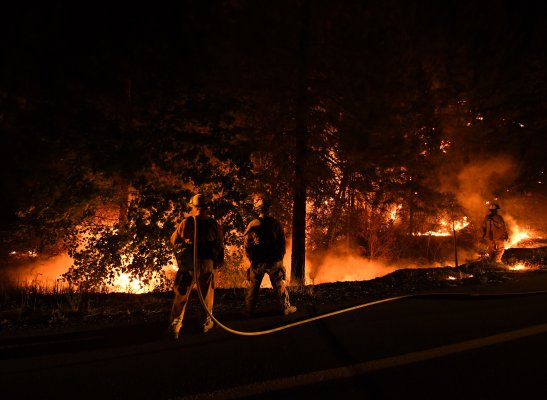 There Are 14 Active Wildfires Burning Across California. This Map Shows All of Them
Next Up: Editor's Pick