The Return of U.S. War Dead from North Korea Is Great for Their Families. But What Does It Mean for the World?

The wooden boxes arrived wrapped in white and blue U.N. flags. Inside lay what is thought to be the remains of American servicemen from the 1950-53 Korean War, returned from the North Korean coastal city of Wonsan by a U.S. military plane Friday morning and carried solemnly before an a honor guard at South Korea’s Osan Air Base.

The return of war dead came on the 65th anniversary of the armistice that effectively ended that same Cold War conflict. It marks the first concrete concession coughed up by North Korean leader Kim Jong Un since last month’s much-hyped summit with U.S. President Donald Trump in Singapore. Taking to Twitter, Trump said, “After so many years, this will be a great moment for so many families. Thank you to Kim Jong Un.”

But it remains to be seen what the return of an estimated 55 dead really means. The number of American families offered solace by Friday’s repatriation is infinitesimal compared to those threated by Pyongyang’s nuclear capabilities. North Korea hasn’t tested a missile for ten months, claims to have destroyed its only known nuclear testing ground and appears to have started dismantling its Sohae satellite launch station. But we are a long way from the complete, irreversible, verifiable denuclearization that is Washington’s stated goal.

“Does [the return of remains] mean North Korea is willing to denuclearize? I just don’t see that connection,” says Daniel Pinkston, a North Korea specialist at Troy University in Seoul. “Their ideology, how they view the world system, is still consistent with maintaining a nuclear arsenal.”

Read more: The Trump-Kim Summit Was a Month Ago. Little Has Changed So Far.

Yet the return of war dead was one of only four points to come out of the Singapore post-summit declaration. According to the document, Washington would provide unspecified “security guarantees” in exchange for North Korea’s “unwavering commitment to complete denuclearization of the Korean peninsula.” But we’re still no closer to a consensus on what “denuclearization” actually means.

“It really seems to me that Trump got distracted by this POW remains issue,” Prof. Stephan Haggard, a Korea expert at the U.C. San Diego School of Global Policy, told TIME immediately after the Singapore summit. “I mean, talk about being taken to the cleaners.”

Since 1990, North Korea is believed to have repatriated the remains of 340 U.S. war dead. But painting the resumption of that process as a victory for the U.S. is misleading. In fact, it was President George W. Bush that cancelled recovery missions in 2005 amid heightening tensions over the North’s nuclear program.

Even then, the missions were always controversial, as Pyongyang shamelessly exploited the issue to eke out political and financial benefits. According to David Maxwell, a retired U.S. Army Special Forces colonel who served five tours on the Korean peninsula, every aspect of the recovery operations is bled dry.

“North Korea plays on our culture, and our culture is ‘leave no service member behind,'” Maxwell told CNN. “Every conflict of the modern era we have worked to recover the remains of Americans that are missing in action.”

Read more: Forget Donald Trump and Kim Jong Un. Here’s Why the People of North Korea Are the Real Solution

A total of 36,000 American soldiers lost their lives during the Korean War, part of an estimated 1.2 million total death toll. Some 7,700 U.S. soldiers remain listed as missing; 5,300 of them are believed still in North Korea.

It’s unclear what the U.S. is paying this time around, though North Korea never does anything for free. In the long run, restarting repatriations could be a bigger win for Pyongyang than Washington.

“It was a successful mission following extensive coordination,” said U.S. Forces Korea (USFK) Commander General Vincent K. Brooks. “Now, we will prepare to honor our fallen before they continue on their journey home.”

A formal repatriation ceremony will be held in Onson on Aug. 1. Then the remains will be flown to a U.S. military laboratory in Hawaii for DNA analysis to confirm their identities. North Korea’s true intentions, however, will still be a mystery. 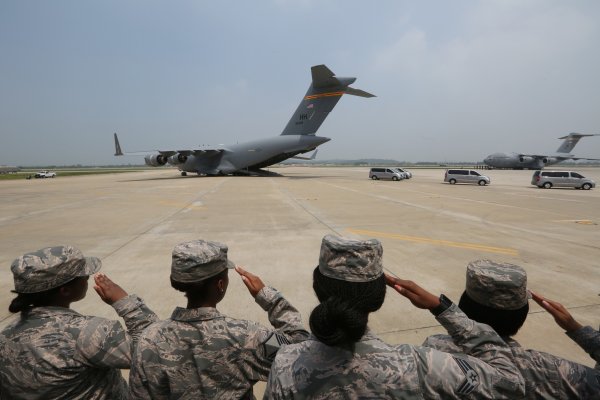 Here's Why It's So Difficult to Bring Home War Remains
Next Up: Editor's Pick