‘You Cannot Speak as You Wish.’ Dissenting Voices Stifled Ahead of Cambodia's Contentious Election

To vote or not to vote? The debate simmering in Cambodia ahead of Sunday’s election would normally provide plenty of fodder for discussion at Politikoffee, a weekly forum where young political enthusiasts gather over coffee and current events. But even at the Saturday institution the impending election is a topic broached with caution. These days in Cambodia, few risk speaking openly about politics.

“Freedom of expression is not quite the same as before,” says Noan Sereiboth, a political blogger and frequent contributor to Politikoffee. “Some people were arrested for posting things online attacking the prime minister or the king. So people are worried about what they can say.” Looking over his shoulder, he adds that you never know who’s listening.

Politikoffee only recently resumed its kaffeflatsch after a discretionary hiatus. Some parents urged their children not to get involved, according to Sereiboth. “They point to activists who were arrested and say, ‘see, no one helped them. If you join politics, no one can help you.’”

Their warning echoes throughout Cambodia. The excitement suffusing beer stations and cafes in previous polls has been replaced this year with an apprehensive hush.

At the last national poll in 2013, a newly unified opposition, galvanized by a youthful electorate, brought the ruling party to the brink of defeat. The Cambodia National Rescue Party (CNRP) captured 44% of the vote, and alleges it would have won outright if not for widespread fraud. Thousands took to the streets in protests that continued into the following year, when a crackdown on demonstrators reportedly resulted in four deaths.

“I felt shocked because I’d never seen such a big rally or demonstration before, and I didn’t know what tomorrow would bring,” says N, a 29-year-old entrepreneur who didn’t want to use his full name due to security concerns, speaking in hushed tones over an iced strawberry beverage at a Phnom Penh café.

Now, as Prime Minister Hun Sen seeks to extend his 33-year grip on power, his ruling Cambodian People’s Party (CPP) has taken unprecedented steps to eliminate obstacles. He supported the dissolution of the CNRP last year, and dealt critical blows to the press and civil society. Despite the billions of dollars international donors poured into democratizing efforts over the past three decades, rights groups say Cambodia is hurtling toward dictatorship.

“It’s not right to call it an election because we see the winner already,” says Sereiboth.

Read More:Cambodia’s Fractured Opposition Plans a Fight to the Finish

With the only viable opposition eliminated, its leaders imprisoned or in exile, Cambodians once active in politics say they are wary of discussing the topic even among friends and neighbors.

“I don’t want to speak about [politics], because I used to speak out in the past but it got me in trouble,” says Borey, a security guard in the middle-class neighborhood of Tuol Kork that overwhelming supported the CNRP in past contests. “In Cambodia, you cannot speak as you wish,” adds Borey, who also declined to be identified by his real name due to concerns about his safety.

He’s far from alone. In Phnom Penh, the cosmopolitan capital and former bastion of the opposition, ubiquitous CPP posters and blue billboards top houses and shops. But in many cases, this politically correct uniformity aims at disguising outlawed allegiances, rather than demonstrating kinship with the ruling regime. (“This,” says one citizen of his Hun Sen placard, “is my guard dog.”) Ask anyone who they plan to vote for and they quickly disappear behind a smile and a closed door.

In the run-up to the polls, the government has enacted a bevy of repressive laws to quash dissent. There’s a new inter-ministerial task force targeting “fake news,” as well as a draconian lèse majesté clause emulating neighboring Thailand’s ban on insulting the monarchy. Authorities have also been quick to take action against social media users critical of the prime minister, going so far as to repatriate a Cambodian woman from Thailand who threw a shoe at a CPP billboard.

Hun Sen, Prime Minister and leader of the Cambodian People's Party and his wife Bun Rany during a general election campaign in Phnom Penh on July 7, 2018.
Tang Chhin Sothy—AFP/Getty Images

Such cases, while limited in number, foster an impression of the government’s omnipresence.

“Self-censorship is the best form of restriction. You don’t have to pull a trigger, and you don’t have to waste any bullets,” says Ou Virak, head of local think tank Future Forum.

Even seemingly benign election activities, like deliberating the merits of different parties, have become subversive. In a text message sent to Cambodian mobile phone users earlier this month, the National Election Commission warned against criticizing, attacking or even comparing parties. In rules dictated to journalists covering the election, the commission forbade punditry.

With political debate so thoroughly stifled, on a recent weekend afternoon half a dozen Cambodians declined to talk about the election, and no one would give their full names.

Politics are “private” says 18-year-old M, a senior in high school who will be able to vote for the first time this year, but isn’t sure she wants to. “I don’t talk about it in public, because it might [be overheard and] bring trouble to my family,” she says.

This time around, Hun Sen has shown no appetite for even the pretense of a competition. He’s labeled any attempt to remove him from power a “color revolution,” and justified a sweeping crackdown against civil society, labor unions, pro-democracy organizations, broadcasters and the CNRP as necessary to foil what has been branded as a U.S.-backed plot to destabilize the country.

Yet despite a seemingly clear path to victory, the CPP has gone into overdrive canvassing votes and playing up feudal allegiances. Government-aligned media features nonstop coverage of Hun Sen on the campaign trail. He joins villagers in simple lunches eaten with their hands, and in rallies widely perceived as unofficial campaign events, doles out cash envelopes to garment workers, historically the opposition’s bloc. Government officials deny vote-buying.

Many voters have met this blitzkrieg with resigned ambivalence.

“Whether I vote or not I feel it won’t make a difference, because the CPP will win anyway,” says Leak, 29.

But for Hun Sen, whether or not Cambodia votes has become the crux of the matter. The one-horse race has turned into a referendum on Hun Sen’s legitimacy, even as western backers like the U.S. and E.U. withdraw support and the opposition has called for abstention.

“Hun Sen still needs the mandate of the people,” says Virak, of Future Forum. “He doesn’t have full control. He still needs Western legitimacy; now he’s losing much of it.”

Hun Sen has declared the boycott illegal, and has threatened to punish those who stay home on election day. Party vassals have been tasked with cajoling all adults to vote. In some provinces, if pressure fails, more coercive tactics have been employed. In the country’s remote northeast, villagers reported that local officials threatened to withhold public services, like signing birth certificates and other documents, if residents do not cast ballots.

Borey, the security guard in Tuol Kork, says that the current silence should not be mistaken for a general consensus with the status quo. “Just look around,” he says, “There are more people who are unhappy with the government than are happy.” 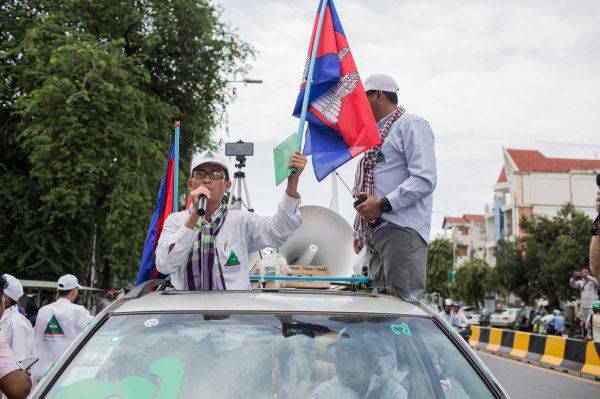 Cambodia's Fractured Opposition Plans a Fight to the Finish
Next Up: Editor's Pick