Demi Moore Arrived at Bruce Willis's Roast With All the Burns

Warning: don’t offer yourself up to be the subject of a Comedy Central roast unless you’re really ready to feel the burns.

Bruce Willis experienced the full fire of the comedy roast when his special aired, featuring appearances from friends like Joseph Gordon-Levitt, Edward Norton and Martha Stewart to, yes, his ex-wife Demi Moore.

Moore pulled no punches, lambasting the popular action star on both personal and professional terms. “I look at our marriage like The Sixth Sense,” she joked at one point, referencing Willis’s famous horror movie. Her punchline: “You were dead the whole time.” (Willis and Moore were married for 13 years and share three daughters. They divorced in 2000. Willis is now married to model Emma Heming, with whom he has two daughters.)

Moore had plenty more to say, too. “Bruce considered the end of our marriage his biggest failure,” she explained of their history. “Bruce, don’t be so hard on yourself, you had much bigger failures. Planet Hollywood, Hudson Hawk… campaigning for Michael Dukakis, turning down Clooney’s role in Ocean’s Eleven to focus on playing the harmonica.”

But Willis, in his own monologue, had a comeback — of sorts. “Joseph [Gordon-Levitt] played a younger me in Looper. He couldn’t pull it off,” Willis joked about the younger actor. “There is one actor who successfully played me. It was Demi Moore.” Sometimes, self-burns are the best of all. 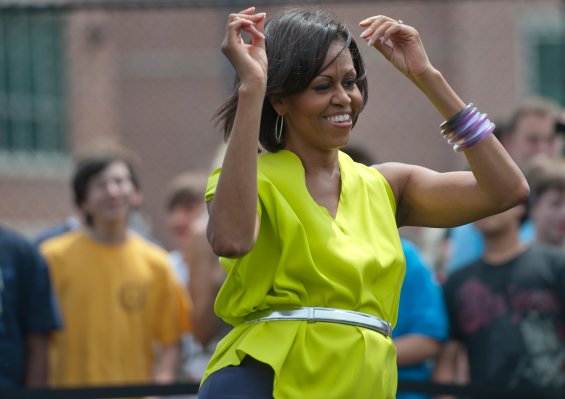 Michelle Obama and Beyoncé's Mom Partied at a Beyoncé Show
Next Up: Editor's Pick