Controversy, Joy and Politics: 5 Takeaways From the World Cup Final

Six goals, pitch invaders, controversial decisions and excitable world leaders: the final of one of the most open and exciting World Cup tournaments in years didn’t disappoint.

France beat Croatia 4-2 to take their second trophy 20 years after they won their first, when the team’s current manager, Didier Deschamps, captained the side.

It wasn’t just the soccer that caught the eye, though. Here are some of the highlights from the final of what some (including the U.S. President) are calling the best World Cup ever.

Politics finally had an impact

With the allegations of corruption over FIFA’s decision to give Russia hosting duties, the violence of some Russia fans at the Euro 2016 tournament in France and, not least, Russian President Vladimir Putin’s aggressive behavior toward the West, the World Cup was expected to be far more marked by political controversy than it ultimately was.

Indeed, it took till the final for any action of note—a pitch invasion early in the second half, responsibility for which was claimed by Pussy Riot, the anti-Putin activist group. Four people dressed as police ran onto the pitch—one woman high-fived French striker Kylian Mbappé, while two men were tackled off the pitch by security with assistance from annoyed Croatia defender Dejan Lovren.

The protest group put out a video and a tweet saying the World Cup showed “how well Russian policemen can behave. But what will happen when it ends?” They also shared their five demands on social media, including a call for political prisoners to be freed and for “political competition” to be allowed in Russia.

The Associated Press reported Monday that the group had been charged with “violating spectators’ rights” and “illegally wearing police symbols,” citing Russia’s Interfax news agency. The group posted on Facebook that they were worried about further criminal charges and said they had been unable to see their lawyer.

For 90 minutes, at least, any geopolitical concerns appeared to be on pause for the world leaders watching from the VIP box—Croatian President Kolinda Grabar-Kitarović wore her country’s football jersey, while Russian President Vladimir Putin and French President Emmanuel Macron wore their more usual suits. The formal wear didn’t stop Macron from leaping about in joy as France took the lead and ultimately the match. The photo of him on his feet, arms in the air as the rest of the box sits straight-faced, went viral—and he was later spotted on player Benjamin Mendy’s Instagram Story with Paul Pogba, doing the “dab” dance move, often used in soccer celebrations.

Macron’s was not the only celebration that made headlines—the entire French team crashed the Deschamps press conference, spraying the manager and the press with champagne and water, and climbing onto the tables. Deschamps praised his “crazy” team: “They are young and they are happy.”

Putin looked after number one

The Russian President may have given the media no reaction of note in response to the pitch invasion, but he managed to make headlines at the medal-giving ceremony. After a dry game, the heavens opened as the players queued for their medals, and only one of the assembled leaders and dignitaries had an umbrella: Vladimir Putin.

As Macron and Grabar-Kitarović enthusiastically hugged players from both teams, getting soaked in the process, Putin stood under a giant black umbrella being held by an assistant. Eventually more umbrellas appeared to cover the rest of the leaders, including FIFA President Gianni Infantino. The players, however, remained in the rain.

Video Assistant Referee (VAR) made its World Cup debut this tournament, and proved decisive throughout. The final was no different, with a penalty awarded to France in the 38th minute coming after a controversial VAR moment: after first dismissing France’s claims of a handball, referee Néstor Pitana reviewed the video footage and decided that Croatian player Ivan Perišić had deliberately handled the ball, and awarded a penalty.

Deflated thereafter, Croatia trailed for the rest of the match. But France’s following goals—one by Manchester United’s Paul Pogba, and the other by 19-year-old Kylian Mbappé—showed Les Bleus were determined winners.

As well as being a first for VAR, the final was also Croatia’s first—the country of four million had previously sent a team as far as third place in 1998 (the year France last won), but this time made it to the final two. The reinvigorated young French side ultimately won out—with Mbappé becoming only the second-ever teenager to score in a World Cup final, joining Pelé, who scored in 1958 against the host, Sweden.

The Brazilian superstar welcomed Mbappé to the club, and the French player was named young player of the tournament. Now the rest of the world is eagerly watching his next move. The super-speedy youngster is being linked with top clubs around Europe, including Real Madrid, but insisted that he’ll stay at Paris Saint Germain when asked by reporters after the match. 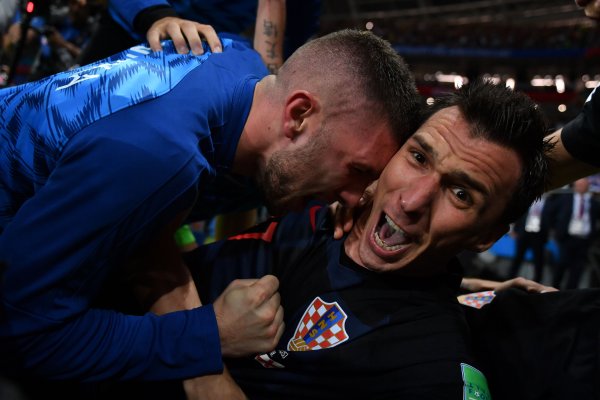 How This World Cup Photographer Captured the 'Pure Excitement' After Croatia's Victory
Next Up: Editor's Pick