What You Need To Know About Pakistan’s Upcoming General Elections

If everything goes according to plan, Pakistan could see only the second civilian transfer of power in its 71 year history when it holds general elections on July 25 (the last time was in 2013). Over 100 million Pakistanis will cast their votes for nearly 12,000 candidates, who are fighting for 849 national and provincial seats in a campaign that, in mid-July, was marred by shocking violence.

Pakistan’s powerful military has ruled the nuclear-armed country for nearly half its existence, and picked favorites among politicians when it has not. Nawaz Sharif, the former prime minster, who recently returned from London to face a 10-year jail term for contentious corruption charges that supporters say are an attempt by the army to undermine civilian power, was once in the military’s favor. The cricketer-turned-politician who could win the forthcoming vote, Imran Khan, now appears to be in the generals’ good books, but past experience suggests he too should be careful. Not one Pakistani prime minister has completed their term.

Good relations with the armed forces are just one of the issues Pakistan’s new leaders will have to deal with. A faltering economy and tough foreign policy issues will require steely nerves.

Who are the main players?

The election will be a battle between Sharif’s party, the Pakistan Muslim League-Nawaz (PML-N), and Khan’s, the Pakistan Tehreek-e-Insaf (PTI).

The incumbent PML-N is the subject of an investigation under anti-terrorism laws, Reuters has reported, over a public rally it staged when Sharif returned to the country on July 13. A senior party official told Reuters that the probe was “just another attempt of intimidation and political victimization.”

Helmed by Sharif’s brother Shehbaz, the PML-N has been campaigning on the strength of its economic record, including energy and infrastructure projects that are part of the so-called China-Pakistan Economic Corridor. However, the economy remains in desperate straits (see below) and there are doubts about whether the party will be able to alleviate poverty levels for another five years.

Nawaz Sharif himself won’t be standing for office after being banned from holding public office for life after his dismissal as prime minister in July 2017. The ouster followed revelations of undisclosed assets in the 2016 Panama Papers.

Political rival Khan and his Pakistan Tehreek-e-Insaf (justice) party meanwhile promise to root out high-level corruption. “The corrupt political elite is trying to protect itself. We have hit rock bottom. The poor are getting poorer, and a tiny number of people are getting richer,” Khan told TIME in June.

Who else is standing?

Also in the running, though not expceted to have much impact, is the Pakistan People’s Party (PPP) led by Bilawal Bhutto Zardari. The son of two-time former Primer Minister Benazir Bhutto and ex-President Asif Ali Zardari is running on a welfare platform that guarantees basic necessities and jobs while battling religious extremism.

A number of transgender candidates are meanwhile standing for election, in light of a landmark new law that promises the transgender community basic rights and protection against discrimination.

A handful of extremist groups with alleged terrorism links are fielding candidates as well. These include Allah-o-Akbar Tehreek, supported by Hafiz Saeed, the suspected mastermind behind the horrific 2008 Mumbai terror attacks. Saeed’s son and son-in-law are reportedly contesting this year’s elections.

What are the issues?

Many of Pakistan’s woes stem from its dismal economy. At just over $10 billion, forex reserves are dangerously low (and by some estimates will cover only a few months’ worth of imports). The widening current account deficit, at around $14 billion, meanwhile shows no signs of slowing down.

Last month, Moody’s downgraded its outlook of the economy to “negative,” a blow to Pakistan’s standing should it approach international groups and banks for financial support. Yet another bailout from the International Monetary Fund is on the cards, according to the Pakistan Business Council. The country has already received 12 IMF bailouts since the late 1980s.

There is help from China. Earlier this month, it lent Pakistan $1 billion to boost foreign exchange reserves, further solidifying its relations with Islamabad, which Beijing views as an important player in the China’s massive transcontinental Belt and Road Initiative. That takes China’s financial assistance to $5 billion in the 2017-18 financial year, about half of Pakistan’s foreign funding. But Pakistan’s heavy dependence on China will reach its limits and a feasible long-term plan will need to be chalked out.

The new government will also have to conduct Pakistan’s foreign relations adroitly—and not just with China. Pakistan’s relationship with neighboring India is historically fraught, especially over the issue of Kashmir and the alleged complicity of Pakistan’s military and secret services in the Mumbai atrocities.

Islamabad has also incurred the ire of U.S. President Donald Trump, who accused Pakistan of goving “safe haven to the terrorists we hunt in Afghanistan” in spite of billions of dollars of aid from Washington over the last 15 years. Pakistan’s new leaders will have to make their stance clear if they hope to count on the U.S. for future financial and strategic support. 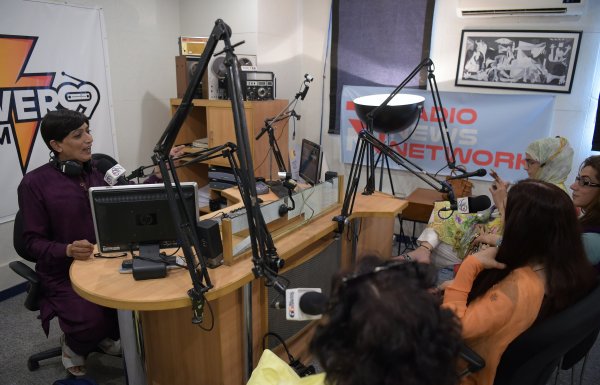 Pakistan's Transgender Activists Look Ahead to Elections
Next Up: Editor's Pick