Meet Lauv, the New Voice in Pop Making Hits Out of Heartbreak

At his shows, the pop singer-songwriter known as Lauv has a box for what he calls “My Blue Thoughts.” In it, audience members can drop strips of paper on which they’ve jotted whatever is on their mind at the moment. Sometimes it’s inane stuff, like a desire for chicken fingers. Other times it’s the serious things: “loss of family members, depression, eating disorders.” Lauv likes to share these notes and commemorate them on a blog he keeps, binding his fans together in an experience of communal openness, a sort of group therapy that continues in his online presence, from Instagram to Tumblr to Reddit.

It’s not a publicity strategy; it’s just who Lauv is. He describes himself as the kid who was a little “weird,” who had a custom banner for his MySpace page that read “Be Yourself,” who wrote love songs before he had a girlfriend and liked sad tunes before he had ever been in a breakup.

Lauv has clearly touched a nerve; his first “playlist,” the 17-track compilation I Met You When I Was 18, has been streamed well over a billion times on Spotify, while his breakout hit “I Like Me Better” brought his first platinum record. He’s booked appearances on late night and morning shows like Jimmy Fallon’s, performed at this month’s Teen Choice Awards and topped Billboard‘s Emerging Artist chart. He’s written for Demi Lovato and opened for Ed Sheeran. The 24-year-old singer-songwriter is well on his way up pop’s ladder as a sensitive, keyed-in new voice, a trajectory he seems to take as a pleasant surprise.

“I don’t know if deep down I truly believed it would be possible. I still have trouble accepting this stuff now,” he says. “It’s almost a little bit numb; you’re like, do I really deserve it more than any other person does?”

For Lauv, that humility also translates into success with his fans. “Kids can tell if you’re being genuine or not,” he explains now over an egg white omelette breakfast, fresh off a morning TV performance in New York City. “I don’t think the world needs more role models of people trying to be something they’re not. I’ve always hated the feeling of trying to be cool or trying to fit in.” He’s wearing a ring in the shape of a lion’s head, nabbed from a local jewelry shop; “Lauv” means “lion” in Latvian, where his mother’s family is from. But Lauv — real name Ari Leff — comes across as a friendlier kind of cat, all big eyes and open heart.

Born in California, Lauv spent his early childhood in a suburb of Atlanta, GA before his family relocated outside of Philadelphia, PA. “My tactic for when I got to a new school was to just be really goofy, be really weird, and try to break all barriers as fast as possible,” he explains. In other words, Lauv — whose music hits a sweet spot filled with nostalgia, full of relatable specifics of youth and memorable college years over moody electro-pop production — prepped from a young age for an experience of being his most honest self in public.

It wasn’t until he picked up a guitar in middle school that Lauv’s transition to full-fledged artist began. From there, he started writing songs — “really bad songs,” he says now. His taste growing up was diverse, from classic rock to Atlanta hip-hop, but he always gravitated to the “sad songs, the emotional songs.” In turn, the music he wrote tended to center on breakups. “My dad used to drive me and my band to our shows, and he’d be like, what am I missing here, you don’t even have a girlfriend!” Lauv laughs now.

By high school, he started playing in bands that performed to empty venues. They’d book the shows themselves, and Lauv was involved in every production element, down to the lighting. “It was good practice,” he says, but it wasn’t exactly a fast track to stardom. Eventually, he lost confidence in himself as a performing artist.

“I was putting myself out there all the time, and I wasn’t really seeing much response,” he says. He decided to pivot to a behind-the-scenes role in the music world, looking into college programs for sound engineering and production.

Even the concept of going to New York City felt intimidating — until he visited NYU and decided to give it a shot after all. Spending his first two years as a studio intern for Jungle City Studios, Lauv soon got used to seeing celebrities stroll through: Jay-Z, Justin Timberlake, Alicia Keys, Timbaland and Jessie J were all recording while he was running errands and fulfilling their specific rider requests, from high-end candles to luxury waters. But Lauv didn’t begrudge the artists their needs: “Any one thing can get in the way of you and your brain being comfortable and being inspired,” he says. “It’s the difference between a really big song and a song that never existed.” He should know best; his breakout hit — and ensuing solo career — almost didn’t happen at all.

Lauv performs during the 2018 Outside Lands Music and Arts festival at Golden Gate Park on August 10, 2018 in San Francisco, California.
Tim Mosenfelder—Getty Images

Lauv had been writing songs to pitch to other artists, trying to get on the radar of managers by sending cold emails, when he wrote “The Other.” Right away, he knew it was different. He ended up pulling an all-nighter in the school library to finish producing it, discovering what’s now his “sound” of stripped-down electronic pop “kind of by accident.” When he finally uploaded “The Other” to Soundcloud in 2015, he was studying abroad in Prague. The attention from blogs and aggregators like HypeMachine was a complete surprise.

“The Other” is a classic breakup song: “Who wrote the book on goodbye?” he sings. “There’s never been a way to make this easy.” The just-electronic-enough production and mid-tempo beat propelled it to earworm status; that one has over 170 million Spotify streams alone. (Lauv says now that his dream collaborator is Chris Martin of Coldplay, and you can easily imagine the two creating a worthy sequel to seminal sad song “Fix You.”) Then there’s “I Like Me Better,” with nearly half a billion streams. It’s a sweet, stripped-down piece of music, a crush in song form boosted with some smart dolphin-like chords and propelled by Lauv’s gentle tenor.

Fast forward to summer of 2018, and Lauv is a platinum artist. He’s toured as an opener for Ed Sheeran in Asia and will be opening for Sheeran again this fall in the U.S., while he begins work on a new project and pursues his own headline tour. And while he’s set up a home base in L.A., he keeps coming back to New York City. His first stop is always the Mexican restaurant in midtown where he once served as a waiter. “I love nostalgia,” he says; it’s what he mines for stories in his lyrics, and it’s something that his legion of fans turn to him for, seeking an honest perspective on young love, growing up and feeling loss. For his twenty-fourth birthday in August, Lauv was touched with fans’ “Blue Thoughts” tributes.

“You guys give me positivity on days I can’t seem to find any,” he captioned his birthday Instagram post. “I f–king love you to death and am blown away by your hearts and minds and I mean it.” If Lauv is any indication, being real — insecurities and all — is the new cool. 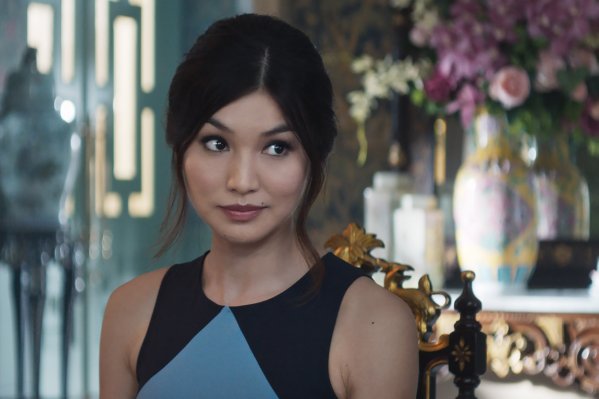 There's Something Important Hidden in the End Credits of Crazy Rich Asians
Next Up: Editor's Pick