How President Trump’s Supreme Court Pick Could Change the U.S.

President Donald Trump considers himself a master showman, having honed the ability to build suspense over 14 seasons of reality television, a convention-shattering presidential campaign and nearly 18 months in office.

His tightly orchestrated wind-up announcing Brett Kavanaugh as his latest pick for the Supreme Court bore all the hallmarks of a matchmaking show, but, unlike some of his other staged events, the hype, the pageantry and the photo op Trump relishes is backed up by serious consequence.

If confirmed, Kavanaugh could solidify a conservative majority on the court for decades and with it likely advance efforts to strip power from regulatory agencies, slow the expansion of gay rights, strengthen gun rights, and, Democrats warn, open the door for states to chip away at access to abortions.

Before Trump walked out to make his prime time announcement Monday night, a parade of conservative luminaries and Administration officials filed into the East Room of the White House to sit on gilded folding chairs set out in a wide arch around a lectern. Melodies from a Marine Corps jazz ensemble could be heard coming from the room next door. As the audience took their seats, the music stopped. Two large wooden doors behind the podium slid open and Trump walked out.

The press had spent the day chasing rumors of Trump talking to friends and aides about narrowing his picks. Reporters saw Kavanaugh leave the U.S. District Court of Appeals earlier in the day in what seemed to be a White House motorcade. As the day progressed, other potential nominees, including Amy Coney Barrett and Raymond Kethledge were spotted in their homes out of state.

Taking the lectern Monday night, Trump went out of his way to praise Anthony Kennedy, who told Trump he was retiring twelve days before, and the late Justice Antonin Scalia’s widow Maureen for coming to the White House. It was Scalia’s death in 2016, and the Republican blockade that followed, that created the vacancy for Trump to nominate last year Supreme Court Justice Neil Gorsuch.

“Both Justice Kennedy and Justice Scalia were appointed by a President who understood that the best defense of our liberty and a judicial branch immune from political prejudice where judges that apply the Constitution as written. That President happened to be Ronald Reagan,” Trump said, pausing to recognize Reagan’s Attorney General, Edwin Meese, who has been an architect of a decades-long effort to seed the federal judiciary with conservative thinkers.

President Trump nominates Judge Brett Kavanaugh to the Supreme Court during an event in the East Room of the White House in Washington on July 9, 2018.
Gabriella Demczuk for TIME

Trump then introduced Kavanaugh, gesturing to this right, where a heavy wooden door swung open and Kavanaugh, his wife and two young daughters took the stage next to Trump. The President dwelled on Kavanaugh’s Ivy League credentials, which were a focus of Trump’s during the selection process, and the fact that, like Gorsuch, Kavanaugh had also clerked for Justice Kennedy. Trump also praised Kavanaugh’s dedication to tutoring children in local elementary schools and coaching his daughters on their basketball team.

When Kavanaugh came to the microphone, he laid out his judicial philosophy, saying a judge “must be independent and must interpret the law, not make the law” and interpret “the Constitution as written, informed by history and tradition and precedent.” He’s taught “hundreds” of students, primarily at Harvard Law School, that the separation of powers enshrined in the Constitution “protects individual liberty,” he said, and added that he’s “grateful” to have been hired by Justice Elena Kagan.

As a circuit court judge, the majority of his law clerks have been women, Kavanaugh said. He described his mom as a “trailblazer,” who started as an elementary school teacher before attending law school, becoming a prosecutor and eventually a judge.

“One of the few women prosecutors at that time, she overcame barriers and became a trial judge. The President introduced me tonight as Judge Kavanaugh. But to me that title will always belong to my mom,” Kavanaugh said.

Kavanaugh’s description of the crucial role women have played in his life and career seemed directed at shoring up support with Republican Sens. Susan Collins of Maine and Lisa Murkowski of Alaska. Both senators said in statements Monday night that they look forward to their in-person meetings with Kavanaugh. Kavanaugh said he would start meeting senators on Tuesday.

With Republicans controlling the Senate by a narrow margin, GOP leaders are gearing up for a grinding Supreme Court nomination fight.

“It will be very difficult for Democrats particularly those in red states to vote against him, except for rank political motives,” said Carrie Severino, chief counsel and policy director at the Judicial Crisis Network, a conservative legal organization. Kavanaugh has “stellar” qualifications, she said.

Liberal activists are preparing to launch a robust campaign against Kavanaugh over concerns about his originalist views on how to interpret the Constitution. Kavanaugh’s nomination “sets in motion a hard right turn for the country that may be irreversible in our lifetime,” said Nan Aron, the president of Alliance for Justice, a liberal group that has studied Kavanaugh’s judicial opinions. If Kavanaugh is confirmed, Aron predicts the court’s future opinions would also roll back consumer protections, clean air and water regulations.

“The stakes for our democracy are as high as they have ever been, if not higher,” Aron said. “We will not accept Donald Trump’s vision for America or the court,” she said.

That’s the same kind of hyperbolic language that Trump himself likes to employ as he extols his own decisions, many of which turn out to be a lot less than advertised. But in this case, both Trump and his critics agree about the size of the stakes. 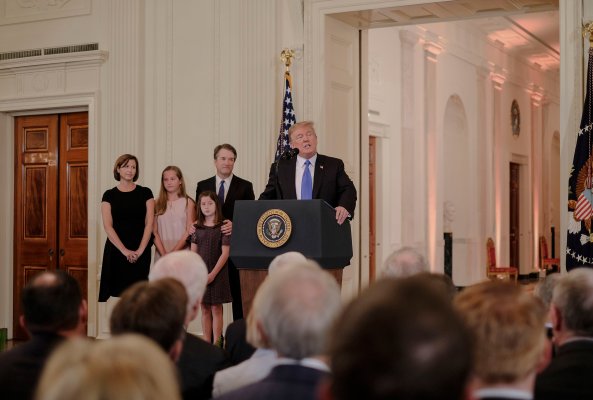