What to Know About Andrew Wheeler, a Former Coal Lobbyist Who Will Temporarily Replace Scott Pruitt As EPA Chief

Andrew Wheeler during his confirmation hearing to be Deputy Administrator of the Environmental Protection Agency before the United States Senate Committee on the Environment and Public Works on Capitol Hill in Washington, D.C. on Nov. 8th, 2017.
REX/Shutterstock—REX/Shutterstock
By Abigail Abrams

Andrew Wheeler, a former coal lobbyist who has been the Environmental Protection Agency’s deputy director, will temporarily step into the top role following Scott Pruitt’s resignation.

“I have no doubt that Andy will continue on with our great and lasting EPA agenda. We have made tremendous progress and the future of the EPA is very bright!” President Trump tweeted on Thursday, announcing Pruitt’s departure from the EPA.

It’s unlikely that much will change at the EPA under Wheeler, who holds similar conservative views about environmental regulations as Pruitt. Here’s what you need to know about Wheeler’s background as he takes over the agency tasked with preserving the country’s environment and natural resources.

He’s not an outsider

While Pruitt arrived in Washington as part of President Trump’s promised wave of outsiders hoping to shake up the Capital, Wheeler has spent years navigating the intricacies of environmental policy. He worked in the EPA under former President George H.W. Bush, spent years as a senior aide in the Senate working to defeat climate-related legislation and most recently was a lobbyist with many clients in the coal industry.

Wheeler is not someone who has sought the spotlight. In June, he told the Washington Examiner that he liked his current job and did not want to run the EPA. This differs from Pruitt, who drew attention not only for his aggressive moves to cut back regulations but also for mounting scandals and questions about potential ethics violations.

But this less flashy style is unlikely to endear him to environmental groups that had been critical of Pruitt. As Pruitt’s controversies grew in April, the Union on Concerned Scientists said it would have serious concerns if Wheeler were made EPA administrator. “Unlike Pruitt, Wheeler worked for the EPA early in his career and has played key roles in Congressional oversight of the agency and its budget, making him a formidable opponent with intimate knowledge of the agency’s programs and regulations,” the group said in the April blog post.

Close ties to the coal industry

It’s not just Wheeler’s time in government that concerns environmental advocates. Before Trump nominated him to become deputy EPA administrator last fall, Wheeler was a lobbyist at Faegre Baker Daniels Consulting, where his best-paying client was the coal mining company Murray Energy. The company paid Wheeler’s firm at least $300,000 each year between 2009 and 2017, according to the Center for Responsive Politics.

Murray Energy’s CEO, Robert Murray, has been a loyal supporter of Trump. After giving $300,000 to the President’s inauguration fund, the New York Times reported that Murray gave Trump a wish list of environmental regulations he wanted rolled back and the President instructed Pruitt to get to work on the list.

Wheeler also had a number of other high-profile clients in the energy sector, according to the Washington Post, and many of these companies have an interest in the regulations Wheeler will now make decisions about as acting head of the EPA.

During his time as a congressional staffer, Wheeler worked as a senior aide to Republican Sen. James Inhofe, one of Washington’s most prominent climate change denialists, according to the Post. Inhofe expressed his support for his former staffer on Thursday, calling Wheeler “the perfect choice” to serve as acting EPA administrator.

The senator was also a supporter of Pruitt, according to the Times, and Wheeler’s rise demonstrates the growing influence of a group of former Inhofe staff members across the Trump administration and Washington including Ryan Jackson, who is currently the EPA’s chief of staff.

He has been critical of Trump in the past

Despite his conservative background and his likely continuance of Trump’s EPA agenda, Wheeler has previously criticized the President.

When he was still working as a lobbyist in 2016, Wheeler wrote a six-point takedown of Trump on Facebook. He called the then-candidate a “bully” and questioned his character, according to the Washington Post. Wheeler said Trump “hasn’t been that successful” in his business endeavors and had “more baggage then all of the other Republican candidates combined.”

When the Post asked Wheeler in 2017 about his previous comments, Wheeler told the paper his post had been based on watching the primary debates and news coverage. When he started looking into Trump’s policies, Wheeler said, “I was fully on board.” 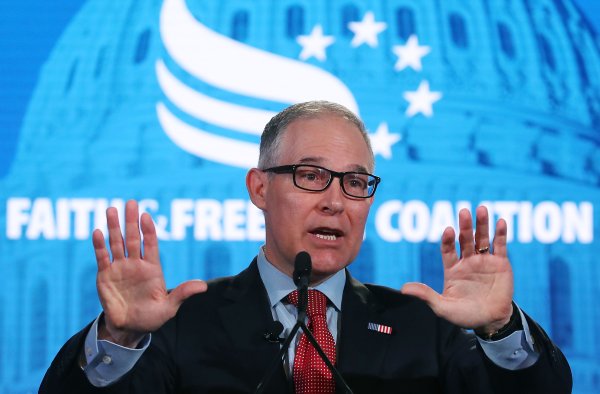 Why Pruitt's Exit Is Complicated
Next Up: Editor's Pick