It was supposed to be a special day for Night.

On June 23, his 16th birthday, family members came over to cook while he went off to soccer practice with his best friends, Tle, Nick and Note. After practice, they and the rest of their team, the Wild Boars, hopped on their bicycles and rode off for what was meant to be a half-day adventure.

“He’s a good boy, the only thing he cares about is soccer,” his grandfather, Sriward Sompiengjai, tells TIME at the compound in the northern Thai village of Vieng Hom, where the four boys live. A birthday cake still waits in the refrigerator for the young athlete, whose given name is Pheeraphat Sompiengjai. It may be waiting for a long time.

Twelve days after the team of boys, aged 11 to 16, and their 25-year-old assistant coach wandered into the nearby Tham Luang cave, Thai authorities are pooling all available resources to try to get them out. They were already more than a mile deep into the complex when heavy rains swept through the tunnels and trapped them inside, setting off a monumental search and rescue effort involving more than a thousand people aided by at least seven foreign governments, including the U.S.

A small tent city has since sprung up in a muddy field near the mouth of the cave, where 13 ambulances are standing by to rush them to the Chiang Rai regional hospital. Volunteers camp out at the site, cooking, keeping the grounds clean, giving haircuts and massages to the rescuers. “I’m very proud, and I was surprised,” Sriward says of the sudden support. “It shows that Thai people do not abandon each other.”

Photographs of Pheeraphat 'Night' Sompiengjai, one of the members of a Thai youth football team currently trapped at the Tham Luang cave, are seen on a wall at his home in Mae Sai on July 4, 2018.
Lillian Suwanrumpha—AFP/Getty Images

The dramatic search at times felt hopeless; drones and helicopters scoured the mountain for alternative entries, while divers delved day and night through dark, dirty water for nine days with no sign of the group since their disappearance. But on Monday night, Sriward and his family jumped up from their seats in disbelief as news broke on TV that the 12 boys and their coach had all been found alive. For a few short hours the nation rejoiced that the search had ended. But the rescue is just beginning.

It could take days, weeks, even months to extract the boys, who cannot swim, and their coach, Ekkapol Chantawong. The governor of Chiang Rai province, Narongsak Osottanakorn, told reporters Wednesday that his preferred plan is to wait until water levels drop enough for the group to simply walk out the way they came. But with the monsoon rains approaching and tunnels still flooded, that day could be a long way off. “I think it’s impossible,” says Captain Wuttichai, who commands a unit of Thai Navy SEALs on the frontline of the rescue effort. “They need to learn how to dive.”

Following a medical assessment, SEALs began giving the boys basic lessons Wednesday. They have already tried on diving masks but have yet to jump into the muddy water that corralled them on a dry rock 12 days ago. Videos released by the Royal Thai Navy show the boys in good spirits but in weak condition; they had only a few snacks to last them the nine days it took rescuers to find them and are visibly frail. Wuttichai says it would likely take at least another day before they will be ready to begin training in earnest, but once they begin they’ll learn fast. They may have to — if water levels don’t recede and they cannot swim their way out, they could be trapped inside until the monsoon season ends in September.

Skies were blue Thursday for the second day in a row, presenting a brief window to pump out as much water as possible. Giant pipes spilling out of the cave’s mouth and plugged into holes drilled through the hillside kept gushing water out into the farmlands below. Levels crept slightly downward, but a single storm could set back the rescue for weeks. Alternative exits are being considered through chimneys above, which could be widened to allow climbers in and out. But entire new roads would likely have to be built to bring the equipment to the precise fissures in the jungle that drop down into the complex. Suggesting a long wait ahead, divers are being trained to install fiber-optic cable from a Navy command station inside the tunnels to allow the boys to talk to their parents.

“All options are being explored,” says Captain Jessica Tait, a spokesperson for the U.S. Air Force, who arrived on June 28 with a survival specialist and a team of pararescuemen — an elite special operations unit trained for search, rescue and medical response in almost any environment. The pararescuers, whose training is so rigorous it’s known as “Superman School,” will remain on the ground to advise and assist Thai authorities in their uniquely difficult mission. “These children had been in a cave for nine days, so you have to consider the physiological and psychological things that the kids are going through,” Capt. Tait tells TIME. “Nothing is off the table.”

The 12-day whirlwind of blind hope and anxiety has gripped the nation and much of the wider world. Hundreds of journalists rushed to the scene to broadcast the slightest developments. Hill tribe shamans trekked from nearby villages, sacrificing live animals to a mountain spirit in exchange for the boys’ safety. At their school, in the district of Mae Sai bordering Myanmar, classmates pray to see them again. When they were finally found by a pair of British divers setting guide ropes Monday, parents burst into tears.

Details began to emerge this week about how the team survived. Ekkapol, the coach, is said to be in the weakest condition after forgoing food for the kids. Citing a Thai SEAL who made contact with the team, local news site Khaosod reported that he rationed their food, collected clean water and advised them to lie still. A translator for a team of six Chinese divers on the mission told TIME that Ekkapol, who like most Thais is a devout Buddhist, is believed to have led them in long meditation.

Sriward, Night’s grandfather, says he will become a monk when the boy is safely home. And the Wild Boars?

“I’ll never let any of them near a cave again,” he says. 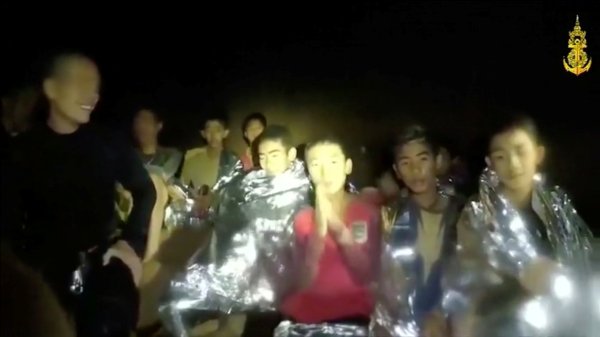 Message From Inside
Next Up: Editor's Pick