Duterte is Assassinating Opponents Under the Cover of the Drug War, Philippine Rights Groups Say

The assassination of two provincial mayors in two days has raised fresh fears that law and order in the Philippines—already in a fragile state as the result of a bloody war on drugs—is deteriorating further.

On Tuesday, motorcycle-riding gunmen ambushed Mayor Ferdinand Bote in his car after he left a meeting in Cabanatuan City, about 100 miles north of Manila. The morning before, a suspected sniper shot Mayor Antonio Halili in the chest as he sung the national anthem in front of Tanauan City Hall in Batangas, about 40 miles south of the capital.

Their deaths have brought to at least 10 the number of mayors who have been killed since President Rodrigo Duterte took office in 2016.

Halili, who had gained local notoriety for parading drug suspects on “walks of shame”, was stripped of his powers to supervise anti-drug operations when authorities included him on a list of government officials supposedly linked to narcotics (the administration is fond of making such accusations, often without proof). His death came just four days after Duterte publicly joked that vice mayors should kidnap or otherwise depose their bosses.

“The earlier you do away with your mayor, the earlier you become the mayor also,” he told an audience in Bohol province, where at least two mayors have been killed since he took office.

“Duterte’s culture of violence is upon us. No one is safe now,” opposition senator Antonio Trillanes, said in a statement Tuesday. Trillanes, who last year told TIME he was an assassination target, added that whether or not Halili’s killing turned out to be connected to the war on drugs, the president had turned the Philippines “into the murder capital of Asia.”

Read more: Another Philippine Mayor Accused of Drug Ties Has Been Killed in a Police Raid

The Philippines has a long history of political killings. The 1983 assassination of Benigno “Ninoy” Aquino Jr.—a politician and vocal opponent of the dictator Ferdinand Marcos—was one of the driving forces behind the so-called People Power Revolution that ousted the autocrat. In 2009, under then-President Gloria Macapagal Arroyo, gunmen killed at least 57 people traveling with supporters of a politician challenging a powerful clan in local elections.

But the latest spate of mayoral murders “reflects the persistent climate of impunity” that has been exacerbated by Duterte’s drug war, author and analyst Richard Heydarian tells TIME. “To this date, we are yet to see any of the cases of extrajudicial killings resolved, highlighting the disturbing erosion of rule of law,” he says.

According to some estimates, more than 20,000 people have died in the war on drugs.

Human rights groups say Duterte, a former mayor elected on an anti-crime platform, is using the drug war as a cover to crack down on political opponents. The deaths of mayors like Halili strikes fear into the hearts of “politicians, especially in the provinces, who are then forced to toe Duterte’s line,” says Carlos Conde, Philippines researcher for Human Rights Watch’s (HRW) Asia division.

Months after his election, the Philippine President read out a list of 158 public officials he accused of being involved in the narcotics trade. This year, his administration put out another list of 600 people, including a UN Special Rapporteur, alleged to be communist terrorists. At least four mayors on government “narco-lists” are now dead.

They include Mayor Samsudin Dimaukom who had run on a Liberal Party ticket in the southern town of Datu Saudi Ampatuan. Dimaukom, 53, denied Duterte’s accusation that he was involved in narcotics. But in October 2016, Anti-narcotics officers killed him and nine of his men.

Also on the list was Mayor Rolando Espinosa of Leyte, who denied involvement in narcotics but surrendered to police to beat a 24-hour deadline on a “shoot on sight” order. In what the Philippines National Bureau of Investigation later deemed a “rub out,” a police team shot Espinosa dead while he was awaiting trial, claiming he resisted the officers who had come to search his jail cell.

Local authorities had guaranteed Espinosa’s safety in return for his signing a highly questionable affidavit that linked 226 police, government officials, and media workers to an illicit drug enterprise supposedly run by his son. The list included Senator Leila de Lima, who led an investigation into Duterte’s prosecution of the drug war before she was jailed on implausible drug-related charges in February 2017. De Lima has denied the allegations against her.

In July 2017, Mayor Reynaldo Parojinog of Ozamiz become the third such official in less than a year to die in a shoot-out with police after being accused of having links to the illegal drug trade. Police gunned down Parojinog, his wife, two of his siblings, and 11 other people in a series of coordinated pre-dawn raids on properties including the mayor’s residence.

Local authorities claimed officers were attempting to serve Parojinog an arrest warrant when they were “met with a volley of fire” from security guards at his compound. But the mayor’s daughter has accused police of planting drugs at the scene, and Philippine Senator Panfilo Lacson said the suspicious circumstances of the mayor’s death “create the impression that search warrants are merely being used by the [Philippine National Police] to facilitate extrajudicial killing.”

Strongmen in the Philippines have long used assassination to retain control of their territories, according to HRW’s Conde. The difference now is that Duterte has normalized such killings by packaging them as part of the “war on drugs.” The fear they have created is quickly eroding opposition.

Says Conde: “An illustration of this is the fact that most local politicians hitherto aligned with the Liberal Party are now with Duterte’s party.” 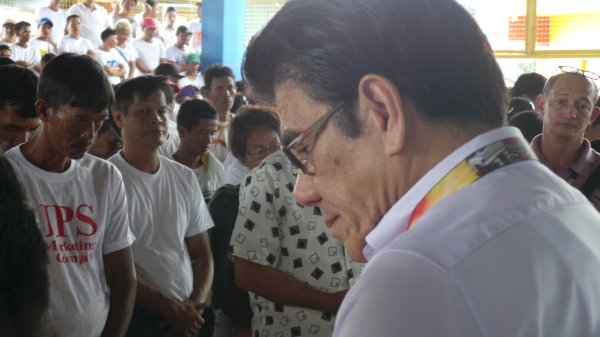 A Controversial Mayor Has Been Shot Dead in the Philippines
Next Up: Editor's Pick