Practically Everyone in the World Will See the Longest Eclipse of the Century Today. Here's What to Know

The longest total lunar eclipse of the century is set to dazzle most of the world, except the U.S., just shy of a year after the 2017 solar eclipse created a path of totality across America.

The July 2018 eclipse — which is happening on Friday, July 27 — will last about four hours and be visible across wide swaths of the world including Europe, Asia, Australia, Africa, South America and the Middle East. The totality, or when the earth’s shadow covers the moon and creates complete darkness, will last one hour and 43 minutes.

While many people will be able to see partial views of the eclipse — which will feature a blood moon and also coincides with spectacular views of Mars — in areas throughout eastern Africa, the Middle East and some parts of Europe and Asia will have some of the best views of the moon turning red and when the totality begins to recede, astronomers tell TIME.

Here’s everything you need to know about how to view the July 27 total lunar eclipse including the best times and places to see it and how long it will last.

What is a total lunar eclipse?

A lunar eclipse occurs when the earth comes between the moon and the sun, causing the earth’s shadow to cover the moon. According to NASA, the moon often turns reddish during totality because the sunlight bending through earth’s atmosphere during sunsets and sunrises are then reflected onto the moon.

The “blood moon” will be a much different view than the 2017 solar eclipse, which darkened the skies for a few minutes as the moon passed in front of the sun.

The July 27 total lunar eclipse will also be seen by many more people than last year’s eclipse. Solar eclipses are typically only seen by a small selection of the earth’s population because the shadow cast by the moon is comparatively smaller than that cast by the earth. That means anyone who is on the side of the earth that is experiencing nighttime will be able to see the lunar eclipse whereas a solar eclipse can only be seen by the people who are where the moon’s shadow falls.

Because solar eclipses are seen by a much smaller section of the population, and the view of the blocked sun is so breathtaking, they create a lot of fanfare.

The January 31 super blue blood moon that occurred earlier this year was also a total lunar eclipse, but it coincided with two other events to make a lunar trifecta. According to NASA, on top of the reddish tint given to the moon from the eclipse, the moon was also very close to earth’s orbit, making it appear larger and brighter. It was also the second full moon of the month, which is referred to as a blue moon.

But the upcoming total lunar eclipse on July 27 is also special because of the duration of its totality.

According to Dr. Amanda Bosh, a professor of astronomy at the Massachusetts Institute of Technology (MIT), the moon will be at its furthest point from earth, called the apogee, during the eclipse. This will cause the moon to move slower than it would if it was closer to earth — so the totality of the eclipse will last for one hour and 43 minutes.

Is it safe to look at the total lunar eclipse without special glasses?

It is perfectly safe to look at a lunar eclipse with just the naked eye.

Protective eyewear was recommended during the solar eclipse to protect people’s eyes from the bright light of the sun. But during a lunar eclipse, the glow of the moon has a much less intense brightness than the sun.

When is the best time to see the 2018 total lunar eclipse?

Dr. Bosh recommends going outside at different times throughout the night on July 27 to catch every stage of the eclipse.

Those lucky enough to see the 2018 lunar eclipse could also be treated to a view of Mars and the Milky Way, which will be to the left of the moon. With the light of the moon blocked by earth’s shadow, it’s the perfect time to view stars and celestial bodies not often seen by the naked eye.

Will the U.S. be able to see this lunar eclipse?

No, the July 27 total lunar eclipse won’t be visible in the U.S.

The next lunar eclipse that can be seen in America will be on January 21, 2019.

But while Americans won’t see the blood moon on Friday, they will be able to see Mars, which is currently the closest its been to Earth in the last 15 years. The Red Planet will be much larger and brighter than it usually throughout the weekend. 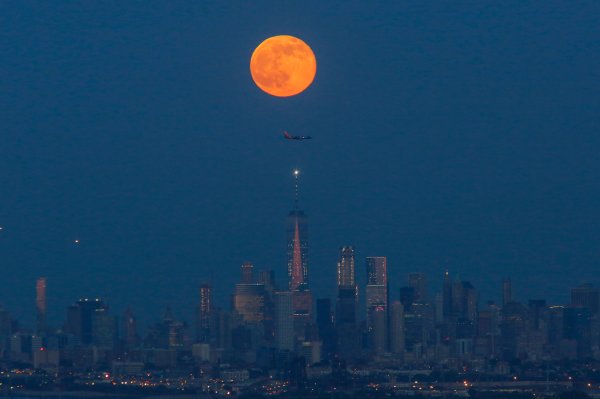 Here's the Best Time to See the One-and-Only Strawberry Moon of 2018
Next Up: Editor's Pick