A Youth Soccer Team Has Been Trapped in a Thai Cave for More Than a Week. Here's Why It's Taking So Long to Find Them

About a thousand Thai soldiers and civilians have been joined by technical experts from half a dozen countries in a desperate effort to rescue 12 young boys and their soccer coach trapped by floodwater in a cave in northern Thailand for more than a week.

The boys, all members of the Wild Boars soccer team between the ages of 11 and 16, and their assistant coach, 25-year-old Ekkapol Chantawong, are believed to have entered Tham Luang Cave after practice on June 23 for what was meant to be roughly a five-hour trek. Monsoon rains flooded several chambers and blocked the exit.

Rescuers tried to pump out the water so divers and medics could reach them, but the days that followed only brought more downpours. Authorities then began looking for alternative entries on the mountain above, but they found few viable options. More than a week later, time is running out.

The search for the missing boys and their coach has gripped the nation. Well wishers hold vigils in schools and temples across the country. Social media users created hashtags to draw attention to the story. Residents of the mostly rural Chiang Rai province have volunteered to cook, clean and support the boys’ families and rescue teams at a muddy encampment near the entrance to the cave complex.

They’ve held onto hope for ten days as Thai authorities try everything they can to make contact. Here’s why it’s taking so long to find the missing team, and what’s next in the extraordinary effort to save them.

Local women attend a Buddhist prayer for the missing children at a school near Tham Luang cave at the Khun Nam Nang Non Forest Park in the Mae Sai district of Chiang Rai province on July 1, 2018.
Lillian Suwanrumpha—AFP/Getty Images

The Tham Luang cave system is a sprawling complex beneath the Nang Non Mountain marking the border between Thailand and Myanmar to the north. Spanning roughly three miles as the crow flies, a system of narrow corridors winds sharply up and down, connecting larger chambers of limestone dripping with stalactites.

Several small rooms are located along the 1.8-mile stretch from the cave’s mouth to a T-intersection. To the right is a tunnel leading north. To the left, the main attraction: a vast amphitheater-like chamber known as Pattaya Beach, named after the popular tourist destination just south of the Thai capital Bangkok.

The trek to Pattaya is not particularly difficult, but it can take a few hours in dry conditions through narrow tunnels. Authorities hope that the missing team made it to the spacious cavern, where ground is high and likely to be above water. Small openings are expected to provide enough oxygen, while springs supply fresh water.

Besides some scattered belongings in the earlier chambers of the cave, there has been no direct sign of the boys and their coach. But rescuers believe huddling on the Pattaya shelf would be their best — perhaps only — chance of survival. Divers have not yet been able to reach the chamber due to extremely rough conditions, while climbers have yet to find any chimneys leading into it from above ground. Chiang Rai Governor Narongsak Osottanakorn said Sunday that a conventional exit through the mouth of the cave is the most likely scenario.

Thai Navy SEALs on the frontline of the rescue effort have established a command center in “chamber three,” an elevated room about a mile from the entrance and just under a mile from the junction, according to maps provided by Thai authorities. The station has been outfitted with lighting, medical equipment, a communications system and supplies such as food and oxygen, which is being deposited at 25-meter intervals throughout the inundated tunnels.

As of Monday morning, divers were closing in on Pattaya after setting out from command, passing the intersection and arriving within a mile of the target.

Thai authorities responded quickly to the crisis, but conditions were not in their favor. SEALs arrived late on the night of June 24, and first dove into the dark waters around 2 a.m. They kept diving, rotating three teams of six over the next 16 hours, but made little progress through opaque pools of rain, dirt and debris.

Rising water levels forced them to suspend exploration several times. Submersible pumps were brought to the scene to empty out the flooded tunnels, but new rains filled them right back up again. “We had bad luck,” Narongsak, the governor, told TIME on Friday. “The water came in faster than we could control it.”

By Wednesday, Thai authorities had asked for help. Three British diving experts rushed to the scene, as did a cave expert with extensive knowledge of Tham Luang. The U.S. Indo-Pacific command sent a survival specialist and a team of pararescuemen — an elite special operations unit trained for search, rescue and medical response in almost any environment. Military personnel from Australia arrived later in the week. China, Japan and Israel also sent specialists, believed to be private-sector civilians.

Upon their arrival Thursday, U.S. forces were met with pounding rains. Captain Jessica Tait, a public affairs officer for the U.S. Air Force, said Thai authorities were battling extremely unfavorable circumstances that got progressively worse. “This is a unique problem that’s bringing people together,” she said. “All of Thailand is here, bringing their hearts and their passions to solving this. Everyone is doing the best they can, given the situation.”

No Help From Above

Helicopters and drones hovered overhead searching for heat signatures and other signs of life, while police and soldiers rummaged through the jungle for chimneys that could provide an alternative entry point. Two appeared viable, according to Narongsak, and one provided access to a small room 40 meters below. It’s still unclear whether it connects to Pattaya; while extraction from above is unlikely, rescuers hope to at least make contact with the missing team to provide emergency medical treatment and food until floodwaters recede.

Industrial drills supplemented efforts to drain the water, but progress is slow. Responders are working day and night in a race against rains expected to resume this week.

Thai soldiers and police gather in the mountains near the Tham Luang cave at the Khun Nam Nang Non Forest Park in Chiang Rai province on June 30, 2018 as the rescue operation continues for the children of a football team and their coach.
Lillian Suwanrumph—AFP/Getty Images

Thirteen ambulances are standing by to transport survivors to Chiang Rai Region General Hospital, where an entire floor has been cleared to receive them. “We’ve been preparing since the beginning,” says Deputy Director Samroeng Seekaew, speaking to TIME on Monday. Doctors, nurses and mental health specialists are on call to treat trauma, organ failure and infectious disease in the event that anyone is found alive. “If we find them, we want their families to know that we are ready to care for them,” Samroeng said.

Paramedics, soldiers and volunteers successfully carried out an evacuation drill Saturday; if found alive, the biggest obstacle to their survival will be transporting them from Pattaya through still-flooded tunnels to the SEAL command center, then on to the mouth of cave — a difficult journey of several miles guided by rope and sheer determination. Despite the odds, responders remain committed to the mission and say they will not give up efforts until all 13 of the missing are located.

Addressing reporters Monday, Narongsak, the governor, says rescue teams will power on riding a wave of slow but encouraging progress. “I hope today will be another good day,” he said. 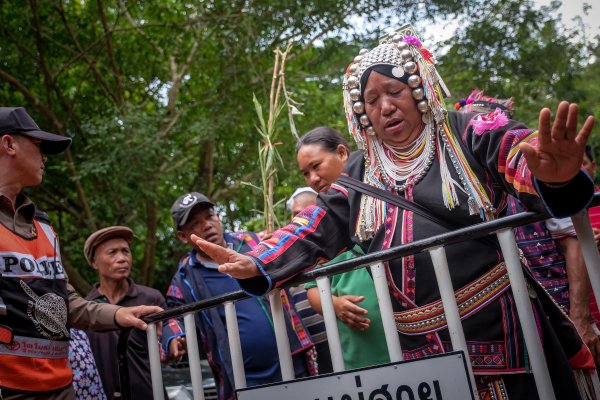 Thai Divers Inch Closer to Finding Boys Trapped in a Cave
Next Up: Editor's Pick