Why People Are Wearing White to Families Belong Together Marches

The more than 600 Families Belong Together marches happening across the country Saturday are expected to attract thousands of people, including a number of prominent lawmakers and celebrities, who are protesting President Donald Trump’s immigration policies. And as photos from the protests begin to accumulate, you may have noticed that many of these people are wearing white.

Wondering why? According to the march’s organizers, white clothing is meant to symbolize peace and unity — and to make a strong statement.

“The lead partners of this action are calling upon participants to wear white—as a striking visual symbol that will also connect attendees in solidarity to each-other and channel historic social justice movements unified by one color of clothing,” a frequently asked questions form for attendees reads. “We believe if we can get a significant portion of the crowd to wear white, it will provide a compelling image for the media coverage and to capture the public’s imagination.”

This isn’t the first time white clothing has been used as an instrument of social and political protest. Suffragettes, for example, wore white when they were campaigning for female voting rights — a statement that resurfaced during the 2016 presidential election. White bandanas also popped up at New York Fashion Week last year, as part of a Business of Fashion initiative meant to promote “human unity and inclusiveness amidst growing uncertainty and a dangerous narrative peddling division.”

Earlier this week, a group of roughly 600 protestors in Washington, D.C., many of whom wore white, were also arrested while protesting Trump’s immigration policies. 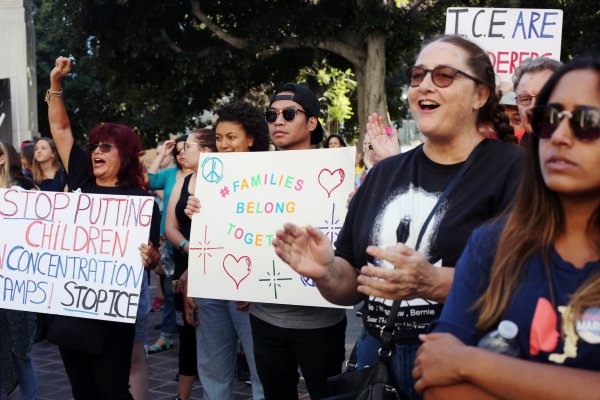 These Celebrities Supported Families Belong Together
Next Up: Editor's Pick