What to Know About the Suspected Capital Gazette Shooter

By Abigail Abrams and Eli Meixler

Jarrod W. Ramos, a 38-year-old man with a past vendetta against the Capital Gazette newspaper and an alleged history of online threats, has been identified as the suspect in the shooting that killed five employees in the newsroom on Thursday.

Ramos was charged with five counts of first-degree murder after he was arrested hiding under a desk at the newspaper’s Annapolis, Maryland office following the shooting.

During an initial court appearance on Friday, prosecutors said Ramos barricaded the exit door at the newspaper so his alleged victims could not flee. Anne Arundel County State’s Attorney Wes Adams said Ramos also shot one employee who tried to escape through a back door, according to the Associated Press.

Ramos appeared in court via video feed. He was dressed in blue detention center clothing, and appeared attentive but did not speak, according to the Associated Press.

In a briefing Friday, Altomare again called the attack on the newspaper “targeted.”

“The fellow was there to kill as many people as he could kill,” he said.

Police said Ramos used a pump-action shotgun in the attack, a weapon he had purchased legally about a year ago.

Among the victims of the attack were four journalists at the paper and a sales assistant. Two others sustained minor injuries, but were later released from the hospital, according to AP.

Here’s what we know about the suspected shooter Jarrod W. Ramos:

Jarrod W. Ramos is a 38-year-old resident of Laurel, Maryland who harbored a long-standing grudge against the Capital Gazette.

In a 2011 story, the Capital identified Ramos as an employee of the U.S. Bureau of Labor Statistics with a degree in computer engineering and no previous criminal record.

The suspect’s motives are not known at this stage, but police believe he deliberately targeted the Capital Gazette, with police saying the shooter “looked for his victims” in the newspaper’s offices.

“The shooter has not been very forthcoming, so we don’t have any information yet on motive,” Anne Arundel County Executive Steve Schuh said Thursday, according to AP.

Altomare on Friday denied earlier reports that Ramos had damaged his fingers to prevent identification.

Ramos had a history of online attacks against the Capital Gazette

Ramos reportedly held a long-standing grudge against the Capital Gazette, according to the Baltimore Sun. In 2012, he filed a defamation lawsuit against then-columnist Eric Hartley, Capital Gazette Communications, and the paper’s then-editor and publisher Thomas Marquardt.

The complaint centered on a July 2011 story that covered a criminal harassment case against Ramos, who had been accused of tormenting a former high school classmate with whom he had tried to reconnect with online. Ramos ultimately pleaded guilty to a misdemeanor harassment charge in the case, which the woman described as a “yearlong nightmare.” The Capital Gazette reported at the time that Ramos sent multiple messages to the woman, asking for her help and then calling her vulgar names and telling her to kill herself.

The defamation suit against the Capital was dismissed in 2015. Ramos then appealed and the appeal was rejected.

Marquardt said that Ramos had hounded the paper and its employees with online threats for years. “I was seriously concerned he would threaten us with physical violence,” Marquardt told the Sun. “I remember telling our attorneys, ‘This is a guy who is going to come in and shoot us,’ ” he said.

He has been described as ‘a loner’

Ramos’ aunt, Vielka Ramos, 59, expressed disbelief over the attack and described her nephew, who grew up in nearby Severn, Maryland, as “very intelligent” but “a loner” who “wasn’t close to anybody,” the Sun reports.

“He was very intelligent. He would try to communicate with people but he was a loner,” she said.

According to the Sun, Ramos stopped attending family functions after his grandmother died several years ago. 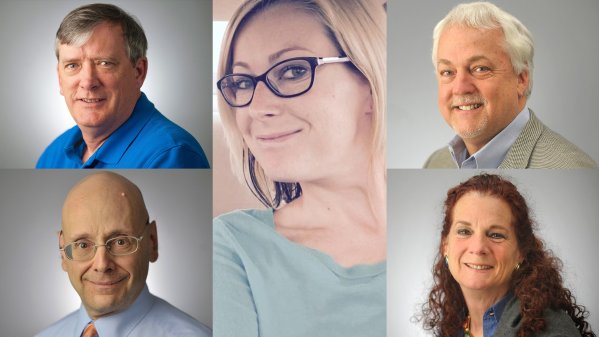 Remembering the Victims
Next Up: Editor's Pick