'We Are Putting Out a Damn Paper Tomorrow.' Capital Gazette Journalists Defiant After Deadly Shooting

Hours after a shooting that left five people dead and several injured at the Capital Gazette office in Annapolis, Maryland Thursday, reporters from the local newspaper were defiant – and determined to continue covering their community.

“I can tell you this: We are putting out a damn paper tomorrow,” Capital Gazette reporter Chase Cook wrote on Twitter.

Police said they had the shooting suspect in custody on Thursday afternoon. They did not identify the suspect, but said he was a white male and was being interviewed by authorities.

Some journalists said that colleagues from the Baltimore Sun, would help produce the newspaper Thursday night.

“There will be a Capital Friday,” tweeted photojournalist Joshua McKerrow.

Others encouraged their fellow journalists and spoke out about the importance of local journalism.

Capital editor Jimmy DeButts tweeted that he was “devastated & heartbroken” – but presented an eloquent defense of his profession. “There are no 40 hour weeks, no big paydays – just a passion for telling stories from our community,” he wrote.

“The reporters & editors put their all into finding the truth. That is our mission. Will always be,” he added.

Many reporters took the moment to reflect on their own jobs and explain to followers why they are committed to their work. Anti-journalism sentiment has been on the rise and has seemed to increase in recent months, particularly as politicians including President Donald Trump use terms like “fake news” and call journalists the “enemy of the American people.” But reporters in Maryland on Thursday stressed that they are focused on their communities — and that they wanted that to continue the work even on the most difficult of days. 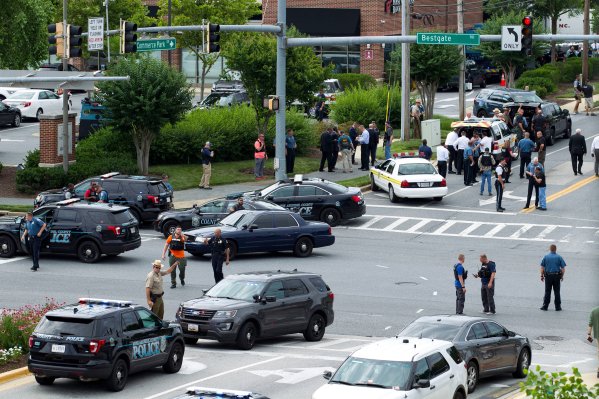 Newspaper Shooting a 'Targeted Attack'
Next Up: Editor's Pick