Here's Who Prince Louis' Godparents Are — And No, It's Not Meghan and Harry

The godparents of little Prince Louis were announced on Monday, June 9th, ahead of the royal baby’s christening.

According to The Daily Mail, van Cutsem is an international business developer, former major with the Household Cavalry’s Life Guard’s, and a close friend of Prince William’s. Those who watched the Royal Wedding of Kate and William might recognize him as the uncle of Grace van Cutsem, the adorable flower girl who stole the show when she covered her ears during the couple’s balcony kiss. His daughter Florence was one of Meghan Markle and Prince Harry’s flower girls. Fellow godfather Guy Pelly is a nightclub owner and childhood friend of Princes William and Harry and that his mother, Lady Carolyn Herbert, was good friends their mother, the late Princess Diana. The young royal’s third godfather, Harry Aubrey-Fletcher, has been friends with Prince William since the two were in the Eton Society at Eton College and were so close that Prince Williams was one of the ushers at Aubrey-Fletcher’s wedding; he currently works in mergers and acquisitions at J.P. Morgan.

The godmothers of the young Prince are equally close to the Royal Family. The Daily Mail reports Lady Laura Meade is cousins several times removed) with Prince William’s stepmother, Camilla, Duchess of Cornwall, while Meade is the daughter of the Earl of Romney, a friend of Charles, the Prince of Wales; her husband, James Meade was one of William’s contemporaries at Eton. Prince William was an usher at Laura and James’ wedding. Mrs. Hannah Robert Carter was a friend from school of the Duchess of Cambridge, having attended Marlborough College, Wilts with her. Lucy Middleton, Prince Louis’ third godmother, is also his relative because Lucy is Kate Middleton’s cousin; she and the Duchess spent a gap year together in Florence, Italy.

Like his siblings, 4-year-old Prince George and 3-year-old Princess Charlotte, Prince Louis will not have his real-life uncle Prince Harry as a godparent. And Meghan Markle, the Duchess of Sussex, although she is the young prince’s aunt, will not serve as a godparent either. Prince Harry and Meghan, Duchess of Sussex are expected to attend, along with Prince Charles, and his wife Camilla, Duchess Cornwall though.

See the official announcement from Kensington Palace below. 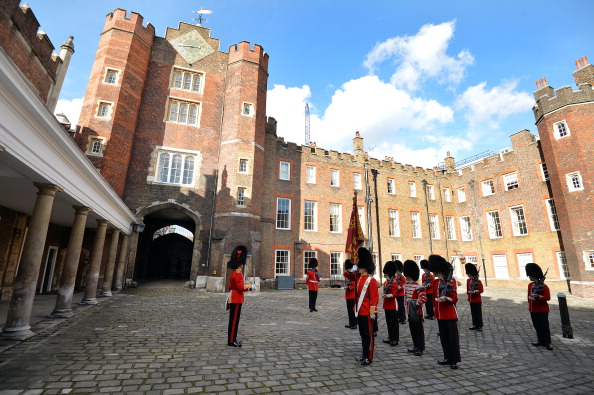 Prince Louis' Christening Venue Has a Poignant Tie to Princess Diana. Here's What to Know About the Chapel Royal
Next Up: Editor's Pick