International Experts from the U.S. and U.K. Join the Search for 12 Missing Thai Boys and Their Coach

Experts from the U.S. and U.K. have joined the search to locate 12 missing teenagers and their soccer coach, as the effort to rescue the team trapped inside a cave in northern Thailand stretched into its fifth day.

Three British cave diving experts, named as Robert Charlie Harper, John Volamthen and Richard William Stanton, arrived in Chiang Rai Wednesday evening, according to Thailand’s The Nation. The U.S. military’s Indo-Pacific Command has also dispatched a 30-strong search-and-rescue team, who were on the ground to assist Thai units Thursday morning, according to AP.

Rescue operations led by Thai Navy SEALS were impeded Wednesday by swirling, muddy water, which at times rose by as much as 15 cm (6 in) per hour and prevented divers from navigating submerged chambers in the sprawling cave complex.

Efforts Tuesday and Wednesday to locate surface shafts that would allow rescuers to access deeper sections of the cave were also unsuccessful.

The 12 members of the Moo Paa (Wild Boar) Academy football club, aged 11-15, and their 25-year-old coach are thought to have become trapped after entering the Tham Luang Nang Non cave on Saturday. Authorities hope they are taking refuge in a dry chamber on higher ground inside the cave. Earlier forays this week turned up shoes, bags, and hand- and foot-prints.

Over 1,000 Thai military personnel are now engaged in the rescue operation, according to The Nation. On Wednesday, Thai teams constructed dams in an effort to prevent more rainwater from flowing into the cave.

Families and supporters of the missing boys, who gathered outside the cave entrance this week, also continued their vigil Thursday, holding prayer sessions and lighting incense sticks. 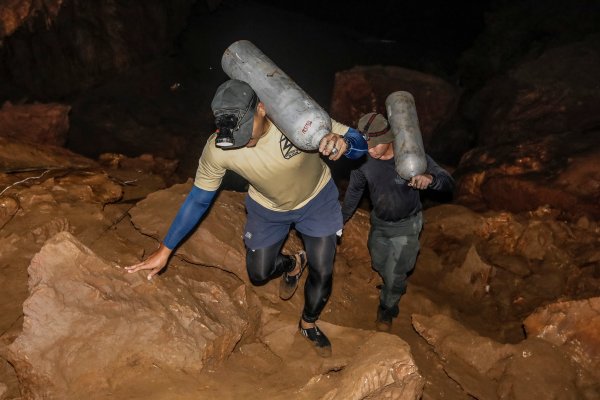