The back and forth between Jimmy Fallon and President Donald Trump is anything but over.

Following Fallon’s apology for his 2016 interview with the then-Republican candidate, Trump made time during Monday’s campaign rally in West Columbia, S.C. to take another shot at Fallon – and the other hosts of late-night television.

“Did you see Jimmy Fallon?” Trump asked the crowd, who booed at the The Tonight Show host’s name. “Jimmy Fallon… The guy screws up my hair, going back and forth… He was so disappointed to find out it was real. He couldn’t believe it.”

Fallon’s feelings on ruffling Trump’s hair were not lost on Trump himself, who tweeted on Sunday that Jimmy Fallon was “now whimpering to all” about the “famous ‘hair show'” and called on the comedian to “be a man.”

Later that Monday night, Jimmy Fallon responded to Trump’s Twitter barb with a monologue, where he wondered if the President had better things to do than take a swing at him on social media.

After attacking Fallon at the South Carolina rally, which was meant to support Republican Gov. Henry McMaster, Trump continued his tour of other late night hosts that annoy him, doubling down on his thoughts on Stephen Colbert.

“The guy on CBS, what a lowlife. I mean, honestly, are these people funny? I can laugh at myself,” he said after bemoaning the lack of Johnny Carson-level talent on TV.

Trump also worked in a jab at Jimmy Kimmel, saying he said has “no talent.” He ruled out any future appearances on Jimmy Kimmel Live!, where he has also appeared.

“Now I wouldn’t do his show. That guy’s terrible,” he said. But Fallon isn’t completely out of the President’s good graces, as Trump made a point of calling him “a nice guy,” though he did add that “he looks like a lost soul.” 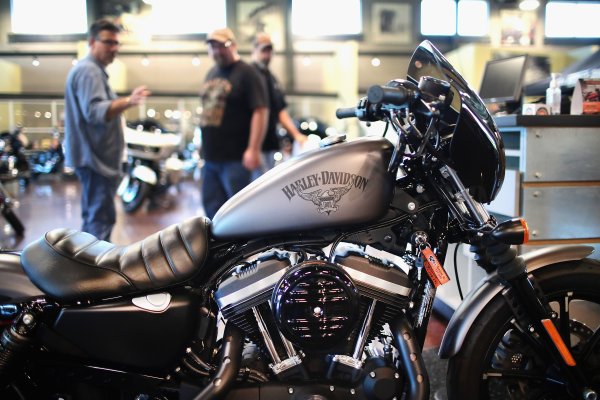 Trump Threatens Harley-Davidson With 'Big Tax'
Next Up: Editor's Pick