Today I Visited My Turkish Colleague in Prison. Erdogan’s Crackdown Must Stop

Today, if all goes to plan, I will step through the imposing metal gates of Şakran high security prison in Turkey. And there is nowhere else in the world I would rather be.

I am in Turkey to attend tomorrow’s trial of our jailed Amnesty Turkey honorary chair, Taner Kılıç in Istanbul. Before the hearing begins, I have been granted permission to visit Taner for the first time, in the seaside city of Izmir.

Taner Kılıç is an esteemed human rights lawyer who has spent his career fighting for the rights of refugees and other marginalized people. But in today’s Turkey this has made him a criminal.

It has been 13 long months since the Turkish authorities first detained Taner on baseless charges of belonging to what they called a “terrorist” group. His prolonged imprisonment on remand has sparked global condemnation and highlighted just how ruthless the Turkish authorities have become in targeting real or perceived critics.

Taner has been charged with “membership of the Fethullah Gülen Terrorist Organization”, a group that the government holds responsible for an attempted coup in July 2016. The charge is based on the false allegation that Taner downloaded ByLock, a messaging application the authorities say was used by followers of Fethullah Gülen, a preacher living in the U.S. who has been at odds with Recep Tayyip Erdogan’s government since 2013.

However, after more than a year, the Turkish authorities have still not been able to provide any credible evidence to substantiate the allegation against Taner, or indeed to implicate him in any criminal wrongdoing.

A 15-page report finally provided by the police earlier this month failed to find any evidence Taner ever had ByLock on his phone. It reveals that they carried out forensic examinations and that ByLock did not appear on the list of items found on the phone, including deleted applications.

This corroborates the findings of four independent forensic reports previously submitted to the court that also showed he did not have the app.

The case against my colleague has always been absurd, but we won’t feel any comfort until Taner is actually free, given the present state of Turkey’s justice system, which seems to grow more arbitrary and capricious by the day.

Earlier this year, Taner did spend one night outside the bleak confines of Şakran. On the evening of January 31, an Izmir court ordered Taner’s release and his family—his wife, Hatice, and their three daughters—rushed expectantly to the prison. They waited outside for hours, shivering with cold and excitement, but when the gates finally opened at midnight, the car carrying Taner drove straight past them. That night Taner did not get to hug his daughters nor hold his wife’s hand. Instead he was taken to a nearby detention facility, where he was held overnight while the court considered the prosecution’s appeal, lodged against the earlier order for his release. The next day the court ruled in favor of that appeal and Taner was sent back to jail.

Taner’s plight is emblematic of the new wave of repression currently gripping Turkey. In the two years since the coup attempt, the government has launched a sustained assault on civil society, closing down more than 1,300 non-governmental organizations (NGOs) and 180 media organizations. Independent journalism has been all but obliterated. An astonishing 100,000 public service workers have been arbitrarily dismissed.

It’s easy to be overwhelmed by these numbers, but speaking to Hatice I am able to glimpse the magnitude of the suffering wrought by this crackdown. Multiply these personal moments of sadness by tens of thousands, picture them playing out every day, and you have some sense of what is happening in Turkey.

There are less visible victims too. A number of NGOs that have been forced to close provided a lifeline to marginalized people in Turkey, including refugees and asylum seekers, survivors of sexual and other gender-based violence, displaced people and children. Some of the most vulnerable people in society have fallen into the void left by the shutting down of these organizations.

This is compounded by restrictions on internet usage and people being afraid to take part in civil society activism—both have diminished the spaces where people can seek help and support. Once the fear of speaking out takes root, it is very difficult to eradicate and it could have repercussions for years to come. In such dangerous times, we desperately need people like Taner.

Just under a year ago I made a similar trip to a different Turkish prison to visit another Amnesty colleague, Idil Eser, who spent four months in jail on terror charges after being arrested at a human rights workshop alongside nine other human rights defenders. Idil was released in October but the trumped-up charges against her and the others still stand.

After leaving Şakran prison, I am hoping to meet with Hatice again. She is familiar with the grim protocol of entering Şakran prison. She has walked down the razor wire-rimmed path and endured searches by armed guards scores of times over the past year, and grown used to speaking to her husband Taner through a sheet of glass.

I hope that today will be the last time I visit one of my colleagues in a Turkish prison. I hope that the next time I see Taner he will be back in his office in Izmir, sorting through case work, chatting to his daughters on the phone.

If things don’t turn out this way, we at Amnesty International will double down on our efforts to see our colleague freed. If we can show the courage and commitment that Taner himself would bring to a difficult case, then we’ll be on the right path. 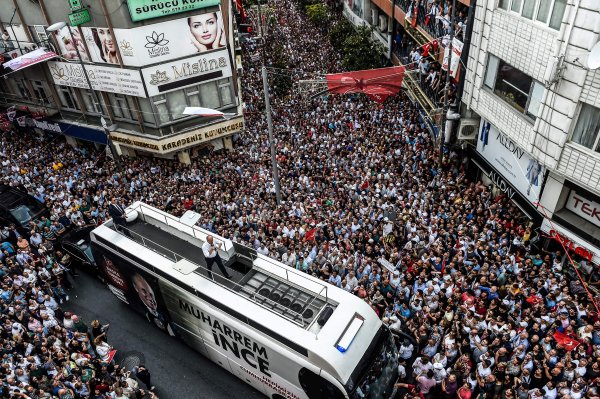 Four Dead as Violence Mars Election Campaigning in Turkey
Next Up: Editor's Pick