Cambodia Is Putting an Australian Filmmaker on Trial for Espionage. His Family Says He's Innocent

Sitting alone in the dock wearing a tatty orange jump suit, James Ricketson turns around to give the press in the courtroom a wearied shrug. The 69-year-old Australian filmmaker has been accused of espionage in Cambodia, and attended the first hearing Friday of a trial that could see him imprisoned for up to 10 years.

Proceedings were conducted in Khmer, but he initially didn’t have a translator. Nor was his lawyer present.

Ricketson is facing charges under Article 446 of the Cambodian Criminal Code, for “collecting information that could be damaging to national defense,” after he was arrested last June for illegally operating a camera drone over a pre-election rally for the opposition Cambodia National Rescue Party (CNRP). Ricketson’s bail request was rejected in January; he has been in Cambodia’s overpopulated Prey Sar prison awaiting trial for just over a year.

At the hearing Friday, the judge postponed Ricketson’s trial for one month. A new court date has not yet been announced.

Ricketson has been visiting or living in Cambodia for 23 years, according to his family members. They say he has been heavily invested in charity work focusing on marginalized communities including sex workers and destitute families in the slums outside Phnom Penh.

He was also an avid blogger and vocal critic of the ruling Cambodian People’s Party. Pretrial proceedings have focused on his correspondence with former CNRP officials. Ricketson previously said that the charges against him were “absolutely” political.

“They’ve asked him a lot of questions about emails he’s written, none of which provide any kind of evidence that he is guilty of the charge that he is allegedly being charged with,” says Ricketson’s son, Jesse Ricketson, who relocated to Cambodia last year to supervise his father’s defense. “He’s an innocent man, he’s not guilty of any crime.”

The CNRP was disbanded in November amid a wide-ranging campaign targeting Cambodia’s independent media, human rights defenders, and political opposition that critics say is intended to stifle any semblance of dissent ahead of national elections next month. Some fear Ricketson has been caught in the crossfire.

Ricketson is a divisive figure among some Phnom Penh residents, having been previously charged twice with defamation against two child protection NGOs, which he has accused of child trafficking. He received a two-year suspended jail sentence in 2014. He also stoked controversy last year with his public defense of a British national convicted of raping a minor in 2011.

A Change.org petition demanding Australian Foreign Minister Julia Bishop to intercede has now surpassed 76,000 signatures, including that of former Prime Minister Tony Abbott. Australia “should firmly indicate to the Cambodian government that it’s past time for [Ricketson] to be released on humanitarian grounds and allowed to return to Australia,” Abbott wrote in May.

Bishop sent a letter to Cambodian Foreign Minister Prak Sokhonn in February, and Australia’s Department of Foreign Affairs and Trade (DFAT) told TIME that the case was raised at the ASEAN-Australia Special Summit in March.

Jesse Ricketson remains hopeful that his father will be acquitted once the trial gets underway. “This is a chance for the Cambodian judiciary to show us that justice can be done,” he said following the hearing.

But Ricketson said that he has yet to receive a formal indictment, and has only seen a recommendation of charges from the prosecutor that “provides no evidence whatsoever that I am guilty of any crime at all.” On Friday, he told the court he had not even received a summons, but had “heard through the grapevine” that his trial was commencing.

“I need to see the evidence against me so I can form a defense,” Ricketson told the judge. “Otherwise I will be back [in court] in a month in the same situation.” 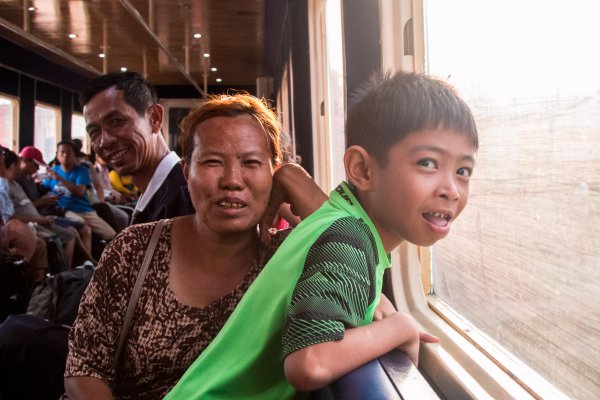 Phnom Penh's New Airport Train Is a Milestone for Cambodia
Next Up: Editor's Pick