Ideas
By Brett Bruen
Bruen was Director of Global Engagement in the Obama White House and is now President of the Global Situation Room, Inc., an international consulting firm.

Trendy isn’t a term that immediately springs to mind when you think of Pyongyang. Let’s be honest: Kim Jong Un’s Maoist wardrobe and aerodynamic hairdo aren’t exactly gracing the covers of many top fashion magazines. After the summit in Singapore, that may change. While the chairman’s peculiar personal style is still unlikely to catch on, his country could quickly become quite en vogue post-summit.

Little Rocket Man to big business. Trump put more than sanctions relief on the table. He has teased the prospect of substantial outside aid and investment. Whether or not such promises are realistic, they raise the prospect of what would constitute one of the most dramatic development projects the world has seen since the end of World War II. Trump is hoping those glimmering karats will work better than standard carrots. In many ways, the American president sounds more like he’s pitching a casino to a potential investor, than a denuclearization deal with a dictator.

Only a couple months ago, North Korea’s brand was synonymous with some of the worst and most menacing threats to global stability. Horrendous human rights violations. The prospect of nuclear war. Debilitating cyberattacks like WannaCry. Not only are we entertaining exceptional economic expansion, there have been a series of seemingly overnight transformations of how the nation and its leader are viewed abroad.

First, Kim Jong Un seems to be in an exceedingly small group of global leaders who have figured out how to effectively deal with Trump. They seem to almost intuitively speak and understand the same bombast. Second, once the world’s top threat, Pyongyang has apparently now become a beacon of peace and stability. That said, the White House’s talk of a Nobel Prize may be just slightly premature.

Perhaps one of the most significant shifts has come in the perception of the chairman’s own personal brand. Sure, he still sports the goofy outfits and hairstyle. Yet, his measured, magnanimous words have caught the world’s attention. His personal, one might say emotional, embrace of a South Korean rival brought even Seoul’s top spy to tears. Kim Jong Un has emerged as a savvy, sophisticated, and even somewhat appealing figure.

Kim and Trump have a mutual interest in putting style before substance. The young North Korean leader sitting beside an American head of state is already a huge propaganda victory. Friendly photos and feel-good statements were the major accomplishments of the summit. They are being paraded out as monumental accomplishments.

Read more: The Trump-Kim summit is a disaster for the North Korean people

The summit has significantly strengthened North Korea’s brand. They got conditional re-admittance to the respected community of nations. Even if the sanctions aren’t immediately lifted, their privileges at many international gatherings and into esteemed global institutions will be restored.

Meanwhile, they are likely to drag out and delay compliance with the core requirements of completely putting their nuclear arsenal beyond reach. They will play a waiting game.

The durability of deals is questionable these days. Trump has perfected the art of dumping the deal, whether it’s the Paris Accord, the Trans-Pacific Partnership (TPP), or the Iran deal. The benefits America derived from them seemed of little consequence to him. Even his initially positive meetings with other world leaders, like Canada’s Justin Trudeau or French President Emmanuel Macron, have proven to be short lived. Why should North Korea believe their vague deal will last any longer?

The most enduring result of the summit may well be that North Korea emerges with a significantly enhanced global image. They are now viewed as a relatively reasonable and even respected actor on the world stage. In all likelihood, the country will enjoy this position while still retaining its nuclear weapons. Pursuing diplomacy for now represents a smart tactic for Kim. He can play along until Trump drives the train off the rails.

Ultimately, the North Korean leader prizes his own self-preservation above all else. He secured a significant deterrent from foreign interference by acquiring nuclear capabilities. Despite possessing such powerful weapons, he still largely lacked legitimacy at home and abroad. Trump has now offered him a path to achieve that next goal. Irrespective of whether the Americans get what they want, Kim strengthens a critical weakness in his hold on power.

By abandoning agreements America had made, Trump may have also inadvertently cleared an another path forward for his North Korean counterpart. The world is making the Paris Accord work without America. Asian allies are pursuing TPP despite our absence. Even signatories to the Iran deal are signaling they are undeterred by the United States’ threat of sanctions. Should Kim Jong Un manage to continue building a somewhat credible brand for himself and his country, he may well be able to find a lasting solution with other nations, even without President Trump. 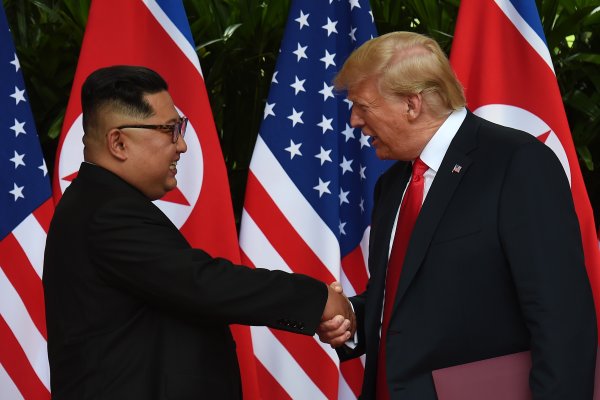 There's a Good Reason Sylvester Stallone Has a Cameo in That North Korea Film
Next Up: Editor's Pick