Trump and Kim Each Got a Win from the Summit. But Did the World?

When Kim Jong Un walked out to shake hands with President Donald Trump — the first time a North Korean leader has met face to face with an American president — he did not wear the ubiquitous red pin with the portraits of his father and grandfather seen on his chest in countless propaganda stills.

The small gesture spoke to a big opening, a signal that Kim may be willing to break with the bellicose records of his father and grandfather and the first several years of his own time in power.

For his part, Trump set aside his his past taunts and insults and launched a pitch for how prosperous North Korea could be if it changes course, going as far as showing a U.S.-produced movie to Kim with a vision of his country as a wealthy, developed state.

He also played the role of gracious host — and perhaps older brother — holding Kim’s handshake for 13 seconds, briefly touching Kim’s arm, then gesturing for the two men to walk toward a room for a one-on-one meeting that lasted more than half an hour.

It was a historic meeting during which the two leaders did their best to set aside 60 years of dark history and distrust as well as their own jabs at each other.

But it is just that history of brinksmanship and betrayal that makes the next steps in negotiations so crucial and progress so improbable. Kim has long seen his nuclear weapons program as a deterrent to the kind of military intervention that toppled Saddam Hussein, while the Trump Administration, like its predecessors, has insisted that is the one thing that it would have to give up in order to join the world community as a peer.

On Tuesday morning, it was clear that the only progress toward denuclearization was rhetorical. The main achievement of the summit was the summit itself — a propaganda win for Kim at home, and something that Trump would cast as a win for himself as well. The biggest concession from the final agreement came on the American side: an agreement to stop joint military exercises with South Korea, which Trump called “provocative” and expensive “war games,” arguing it would save the U.S. a lot of money not to have to fly bombers to South Korea from Guam for the drills.

The U.S. also spent taxpayer money crafting what amounted to a propaganda movie extolling North Korea’s possible future. In a slick, highly produced film made by the White House to show movie-obsessed Kim Jong Un during their meeting, a booming voiceover says, “the past doesn’t have to be the future” as images of the lights turning on in darkened North Korea and gleaming skyscrapers in Pyongyang flip by.

Trump said he is “not concerned at all” that Kim could use the film the White House made to show North Korea as an equal power to the U.S. “I’ll do whatever it takes to make the world a safer place,” he said in response to a question from TIME.

That the summit happened at all was a rare breakthrough helped by Trump’s willingness to ignore the past and diplomatic conventions and start fresh with one of the U.S.’s longest and most intractable adversaries. “Rightly or wrongly, he’s unburdened by recent history,” said Michael Allen, who worked in the President George W. Bush national security council and advised the Trump transition team. “He’s not afraid to visit the premise of an issue and ask, ‘Now, wait a second, let’s go back. Why don’t you smart guys tell me why we are still doing this?'”

So far both leaders are getting what they want out of the exchange. Kim carefully orchestrated the exchange to create the illusion that he’s an equal power to the leader of the free world. Since he started down this conciliatory path, he has had two visits to China and met with South Korean leaders and Russia’s foreign minister. For his part, Trump gets to revel in a characteristically bold moment on the international stage that had eluded his predecessors — never mind that they had intentionally not granted North Korea an audience until it had shown more progress in ending its nuclear program.

Trump has said he’d be open to giving Kim’s government security assurances in exchange for giving up its nuclear weapons and promoting economic development to help its people. Even if little comes of their first meeting, Trump aides point to the fact that has successfully convinced China to let international sanctions affect the country, prompted North Korea to suspend ballistic missile and nuclear tests and released three American detainees.

Before the meeting, Trump took to Twitter to rebut his critics in typically undiplomatic and ungrammatical language, calling them “haters & losers.” “We have our hostages, testing, research and all missile launches have stoped, and these pundits, who have called me wrong from the beginning, have nothing else they can say!” he wrote. “We will be fine!”

But Trump has also promised he won’t lift harsh economic sanctions until Kim shows verifiable steps toward ending his nuclear program. It’s that step toward being a more developed country, respected on the world stage, that Kim wants most, said Dennis Rodman, the former NBA champion who may be the only person on the planet who considers himself a friend to both Trump and Kim. Rodman, who visited Pyongyang in 2013 at the request of basketball superfan Kim, came to Singapore on behalf of a digital currency used by marijuana growers.

The night before meeting with Trump, Kim visited the Marina Bay Sands hotel in Singapore, taking selfies with Singapore’s foreign minister. Kim, who’s ordered the execution of political rivals and presides over a massive network of political labor camps, wants to be able to get out more, Rodman said on CNN Tuesday.

“This guy wants to be around the world. He wants to enjoy his life,” Rodman said.

After multiple meetings and a lunch — capped by Häagen-Dazs ice cream for dessert — the two leaders signed two copies of a joint statement. Trump said it was a “great honor” to meet with Kim and he’s “very proud” of what “took place” at the former British colonial outpost. When asked by a reporter if he would invite Kim to the White House, Trump said, “absolutely I will.”

As the two leaders sat down to talk with only interpreters present, Kim told reporters through a translator: “Well, it was not easy to get here. The past worked as fetters on our limbs, and the old prejudices and practices worked as obstacles on our way forward. But we overcame all of them, and we are here today.” Trump agreed, saying: “That’s true.”

Before the two leaders would sign a statement negotiated between the two delegations during the visit, while journalists waited, a North Korean official wearing latex gloves appeared to clean and inspect the pen on Kim’s side of the table.

“Today we had a historic meeting and decided to leave the past behind, and we are about to make a historic change,” said Kim, as the two leaders sat to sign the statement.

The two leaders are going to “take care of a very big and very dangerous problem for the world,” Trump said. Then, as is his habit, Trump lifted up one signed copy for the clicking press cameras. Kim, for his part, tapped his copy of the paper into the folder and put it down on the table. 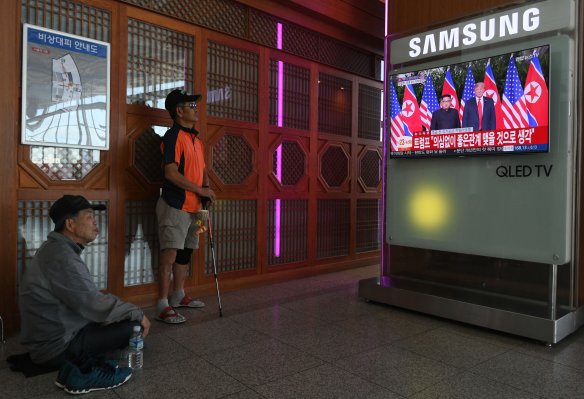 What North Korean Defectors Think of the Kim–Trump Summit
Next Up: Editor's Pick