President Donald Trump strolled in from the right, North Korea’s Kim Jong Un from the left. With a 13-second handshake and a pat on Kim’s arm, the two leaders set the stage for an unprecedented encounter between the sitting U.S. president and the ruler of the world’s most isolated regime.

While their talks tackle the serious aims of ending seven decades of hostilities and denuclearizing the Korean peninsula, optics ruled the show. From the red carpets they strode in on, to who arrived first, Trump and Kim’s meeting at a luxury resort on Singapore’s Sentosa Island was a carefully choreographed affair.

Experts warn that all the pageantry risks normalizing the North Korean regime, even as Pyongyang’s commitment to fully dismantling its hard-won nuclear arsenal remains an open question. Trump insists the summit is about more than just the decade’s best photo opportunity. Ahead of the meeting, he claimed he would be able to determine within a minute of greeting his North Korean counterpart whether serious discussions about peace were on the table.

So as the highly anticipated summit converged with handclasps, grins and a thumbs-up, TIME asked body language experts to decode the spectacle by analyzing nonverbal clues behind the first one-on-one meeting between the two veteran showmen.

Trump left his hotel, the Shangri-La, first. But Kim arrived at the opulent Capella Hotel seven minutes before him. Journalists noted the respect this indicated on Kim’s part.

The height and age advantage

At a summit where both men sought to play the alpha role, the optics were inherently in Trump’s favor. The president holds both an eight-inch height and 39-year age advantage over Kim.

Towering over his North Korean counterpart confers Trump an immediate, visual upper-hand, according to Traci Brown, a body language expert and author of How to Detect Lies, Fraud and Identity Theft.

“It makes ALL the difference in the image,” she wrote by email. “A big guy from a big, rich country trying to get a little guy from a poor country to do what he wants” is a visual easily conveyed by height discrepancy.

“The first four seconds is when rapport is developed and the fact that there was immediate rapport established shows that the meeting has a great chance for success,” says Lillian Glass, a California-based communication and psychology expert.

The fact that Trump approached Kim with an extended arm reveals a receptiveness and genuine bonhomie, she added.

With the handshake serving as the most important symbolic role at the summit, as well as a way to establish who was in control from the outset, experts paid particularly close attention to Trump and Kim’s clasps.

Trump initiated all three handshakes exchanged so far, even though he’s called shaking hands a “barbaric” way to greet someone. Trump’s grip and grins with Kim also notably steered cleared of the death grip yanks he has previously exercised on world leaders, including Japan’s Shinzo Abe and France’s Emmanuel Macron.

“Trump went out of his way to play host. That’s a nice way of showing control over Kim,” says Brown.

A lot of touching

As with previous encounters with world leaders, Trump seemingly could not stop touching his counterpart.

All this physical interaction may have been a way to signal affection.

“Trump is the kind of guy that wears his emotions on his sleeves. If he likes you he lets you know it physically,” she says.

By contrast, Kim appeared to reciprocate the physical interaction just once, but Glass emphasized it signaled an important “mirroring” of Trump’s behavior.

“When someone mirrors you it means they like you and are open to you,” she says.

President Donald Trump sits next to North Korea's Kim Jong Un before their meeting in Singapore on June 12, 2018.
Jonathan Ernst—Reuters

What body language portends about the outcome

Glass adds that when the two sat down to answer questions from reporters before their meeting, their feet were pointed toward each other, they both leaned in and wore receptive smiles. They also shared another handshake.

“From what I observed between the two body language-wise I strongly believe that there is a great chance of success, which is defined as open communication and establishing world peace as Kim is welcomed into the world,” says Glass. 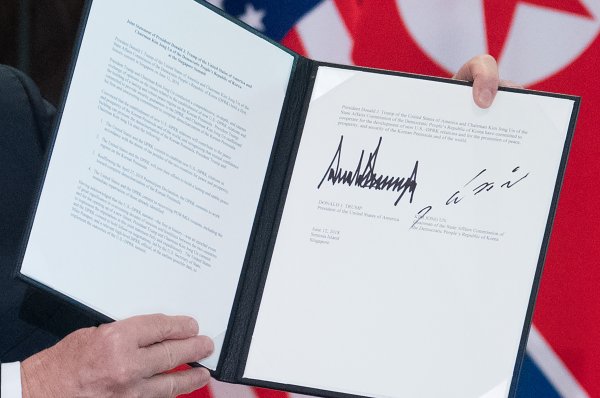 Read the Agreement Signed by President Trump and Kim Jong Un
Next Up: Editor's Pick