President Donald Trump and Kim Jong Un met Tuesday in Singapore’s Sentosa Island, kicking off a historic summit that marked the first time the sitting leaders of North Korea and the U.S. had come face to face.

Kim reportedly greeted Trump in English when the two sat down after an introductory handshake, saying, “Nice to meet you, Mr. President.”

Trump and Kim met one-on-one for about 40 minutes Tuesday morning with the assistance of translators, the Associated Press reported. Speaking with reporters beforehand, Trump was buoyant about the meeting’s prospects, predicting that the two would share a “tremendously successful” discussion.

The leaders then walked along a balcony in the Capella Hotel on Singapore’s Sentosa Island, the venue for the talks. Trump said the discussion was “very, very good” and he and Kim share an “excellent relationship,” according to AP.

As Kim and Trump walked down the colonnade to their meeting with their respective delegations, Kim’s interpreter could be heard telling Trump: “Many people in the world will think of this as a (inaudible) form of fantasy … from a science fiction movie,” according to translation from Bloomberg.

The leaders and delegates then sat down to begin bilateral talks. “We will solve a big problem, a big dilemma that until this point has been unable to be solved,” Trump said. “I know that working together we will get it taken care of. Thank you very much.”

Kim reportedly spoke in English to greet Trump but the extent of his English skills is unknown. The North Korean leader was educated at a boarding school in Switzerland, where he studied English as well as taking instruction in German, although his grades were reportedly less than stellar, according to Vanity Fair.

Other South Korean experts believe Kim’s command of English to be significantly stronger, according to UPI, suggesting that he could choose to use English to help smooth communication at the outset of the tense summit with Trump.

But Kim also relied on translators when he met Dennis Rodman in 2014, but relayed few messages in English to the former basketball player, according to Vanity Fair. Kim’s use of translators revealed “a certain level of discomfort,” Dr. Lonnie Edge, assistant professor at Hankuk University of Foreign Studies’ Graduate School of Interpretation and Translation told TIME

So the pressure will be on for Trump and Kim’s translators on Tuesday, when the leaders, each prone to colorful language, finally sit down face-to-face. 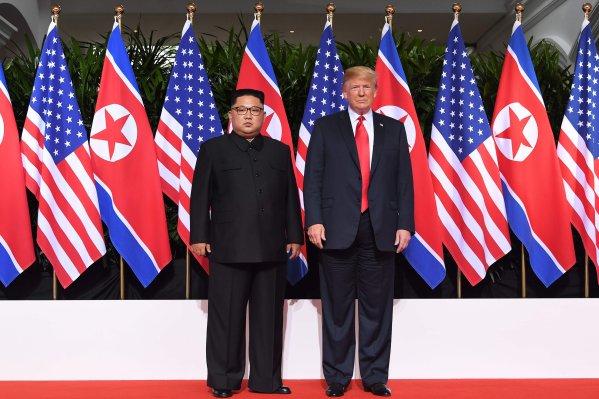 'Major Change'
Next Up: Editor's Pick