'The King Is Back.' Justify Carries Bob Baffert Even Deeper into Racing History With Triple Crown Victory

As Justify raced out to an early lead at Saturday’s Belmont Stakes, and held it for the whole mile-and-a-half, the chestnut colt’s trainer, Bob Baffert, stood stoically in the stands next to his wife Jill, arms folded. Baffert, his snow white mane the most recognizable head of hair in this sport, tends to ooze sexagenarian cool. This was no different. Justify was about to win Baffert his second Triple Crown since 2015.

Horse racing had waited 37 years until one of Baffert’s horses ended the drought three years ago. No biggie.Until it was.

After the last furlong, as Justify galloped ever closer to the finish, it became clearer that a late rush from Gronkowski – yes, a horse named after the goofy New England Patriots football player – was just that. Too late. Baffert leapt a little, shouted and let his arms fly before hugging his wife.

When American Pharoah won in 2015, ending that near four-decade string of Triple Crown misses, Baffert remembered Belmont’s roar. This time was, well, different. “I wasn’t even paying attention to the crowd,” Baffert said after Justify won the 13th Triple Crown in horse racing history. “I could just enjoy the race. I could just take it all in.”

The trainer of both Justify and American Pharoah becomes just the second to ever win the Triple Crown twice — “Sunny Jim” Fitzsimmons also did it twice, with Gallant Fox and Omaha in the 1930s.

The snowy mane of Baffert, horse whisperer to the stars, is now known the world over. Before the race he was incredibly loose, joking about how his daughter can’t name five horses he’s trained — when pressed, she failed to prove him wrong — and how his sons were actually sober for this race, unlike in 2015. He noted that a man dressed in a Burger King costume would appear in his box, like he did for the American Pharoah race. The product placement funds, he noted, will go to charity. “The King is back,” says Baffert. “F—ing A.”

That 37-year wait for the Triple Crown of horse racing was at the same time exasperating, demoralizing, and borderline comical. Why couldn’t one of these thoroughbreds just win three athletic competitions in a row? Bad baseball teams do that all the time. A horse couldn’t pull that off in nearly four decades? Yes, winning the Kentucky Derby, Preakness Stakes, and the Belmont within a five-week window is an incredible challenge. But sports fans aren’t famous for rational reactions. So when American Pharoah won the Triple Crown, the hoards of joyous horse racing fans shook Belmont Park, right outside New York City, to its core. A generation of pent-up frustration spilled out of the crowd.

Justify, who raced to a wire-to-wire victory that was tight, but never really in doubt, sparked plenty of euphoria as he crossed the finish Saturday. A few spectators wept. But Justify won’t be lauded as horse racing’s savior, like American Pharoah. Justify ended a three-year Triple Crown drought. As he headed down the Belmont stretch, victory in sight, he didn’t carry the same weight.

For Justify, being one of the finest athletes of our time will have to do. Though some of his supporters put him on a higher pedestal. “I think he’s the greatest of all-time,” says Mike Smith, Justify’s 52-year-old jockey. “I just won the Triple Crown, man. He’s my champion.”

In the hours before the race, Justify rested in Belmont’s Barn 1, across the street from a Wendy’s, undistracted by the beer-soaked fans who reveled close by – including one who nearly relieved himself on a tree. After a pre-race bath, and a parade around the paddock, Justify entered the gate and broke a little too far to the left at the start. But he was still too fast to lose any ground. “He just listens to everything I say,” says Smith. “Every time I just want him to take breather, I just put my hands back down and he’ll settle right back down. And if I squeeze him a bit, he’ll jump right back again.”

Justify’s stunning rise puts him in the pantheon of great horses. He became the first thoroughbred to win the Kentucky Derby without racing as a two-year-old since 1882, aka the Chester Arthur administration. Baffert compares him to a walk-on player on a college basketball team who suddenly becomes a star: no one saw him coming. The chestnut colt with a pronounced white blaze won on slop at the Kentucky Derby and Preakness; even on a faster track on a clear day at Belmont, his opponents couldn’t outrun him. Justify’s owners are betting on his international appeal. Smith wore the colors of the China Horse Club, one of Justify’s owners, on race day. The red outfit with yellow stars resembled the Chinese flag and this is an attempt to grow the sport there.

Baffert also talked about how this experience differed from three years go. “Pharoah was the champion, he was the hero,” says Baffert. “You could tell, man, this was it, this has to be the horse. This guy [Justify], everyone keeps waiting for him to get beat, you know? With Pharoah, the trainers, the other jockeys, they respected him. This guy, they’re not going to just hand it to him.”

Baffert’s message to Smith before the race: Justify’s got a full tank. Just don’t use it all too soon.

Baffert is often asked to pit American Pharoah against Justify, but won’t take the bait. “I don’t really have to compare them because if they make this wall,” he says, looking over at pictures of other Triple Crown winner that hang in a cramped Belmont Park film theater, “that’s all you need to say.”

Baffert does let on that Pharoah was the more friendly, playful horse. “He has a human touch,” says Baffert. “I finally got to pet Justify after the race today. He let his guard down. He’s just a tough guy.”

Justify gave Baffert his 16th victory as trainer in the Triple Crown series — five Kentucky Derbies, seven Preaknesses and three Belmonts — breaking a tie with D. Wayne Lukas for tops all-time. An impressive feat for Baffert, racing’s most marketable two-legged star, for sure. But most important, Justify’s victory assures that we won’t have to wait another 37 years to see a Triple Crown.

Many sports fans have just a passing interest in horse racing, only tuning in during May and June, when a Triple Crown’s on the line. And that’s fine. It’s nice to be spoiled by so much winning for a change. 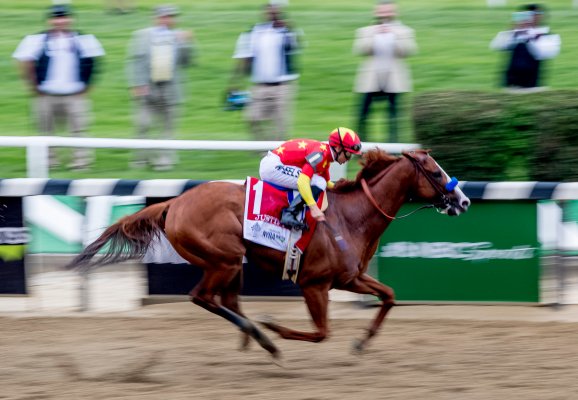 Justify's Win Was Even More Impressive Than It Looked
Next Up: Editor's Pick