There’s a Dark Side to Emotional Intelligence. Here’s How to Protect Yourself

Getty Images
Ideas
By Justin Bariso
Bariso is the author of EQ Applied: The Real-World Guide to Emotional Intelligence.

When Daniel Goleman published the book Emotional Intelligence in 1995, few had heard of the term. In academic circles, it was a new concept — a theory formed by two psychologists, John D. Mayer and Peter Salovey, that posited that just as people have a wide range of intellectual abilities, they also have a wide range of emotional skills that profoundly affect their thinking and actions.

In other words, emotional intelligence can be used for good or evil.

This is the dark side of emotional intelligence: using one’s knowledge of emotions to strategically achieve self-serving goals. Much as a person possessing a brilliant intellect could become an accomplished detective or a criminal mastermind, one with a superior emotional quotient has a choice between two very different paths: using their influence to help or to harm.

Scientists have become more interested in this dark side in recent years. For example:

So, how can you deal effectively with others’ attempts to manipulate your emotions, to avoid making unwise or harmful decisions?

One of the best ways is by working to increase your own emotional intelligence.

For example, your capacity to accurately perceive others’ abilities to persuade, influence or even manipulate people can serve as a self-defense mechanism — a type of “emotional alarm system” that alerts you to the fact that someone is attempting to manipulate your feelings, to get you to act in a way that is not in your best interests or that conflicts with your values and principles.

If you notice someone is trying to inspire fear to move you to drastic action, your alarm system should go off. Instead of quickly jumping on the bandwagon, this alarm should move you to research facts and consider opposing opinions before passing judgment or making a decision.

But what if someone is intentionally trying to get you riled up, angry, frustrated? Maybe it’s a competitor who tries to throw you off your game or an online troll seeking attention or entertainment.

How you choose to engage with these people depends much on the situation and what you hope to accomplish. But Dr. Drew Brannon, who has spent over a decade advising high-level athletes, teams and coaches on how to deal with trash talk, teaches his clients to have a plan, a pre-established routine of how to respond. The goal is to form a mental cue that blocks out the other person’s attempt to manipulate or distract, and allows you to focus your attention on moving forward.

“With this type of programmed response,” says Brannon, “you know exactly where to go with your thoughts when opponents talk trash, helping you stay focused on the task at hand. This works because our minds function best when we know we have the ability to meet a challenge. When the moment comes, you simply do what you’ve trained for.”

To be persuaded, motivated and influenced by others isn’t always a bad thing — as long as it results in behavior that is consistent with your values. If it doesn’t — if you discover you’ve been duped or victimized — endeavor to understand where you went wrong and how you can avoid repeating the mistake.

With practice, you’ll continually build both self- and social awareness, and you’ll gain greater control over your thoughts and actions. Doing so will help keep you from becoming a slave to your feelings, even when a skilled manipulator works hard to exploit them.

This essay is adapted from EQ Applied: The Real-World Guide to Emotional Intelligence, © 2018, Justin Bariso. 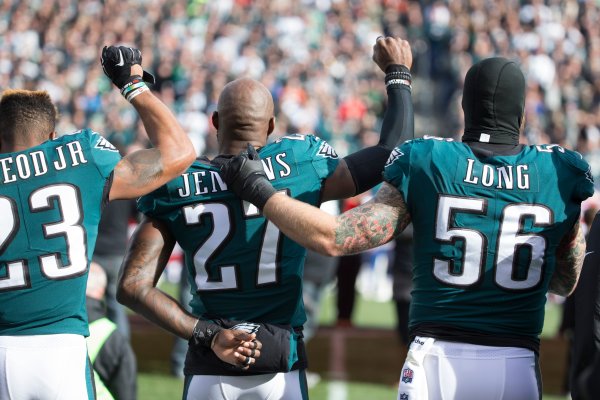 President Trump Hands the NFL Another Anthem Headache
Next Up: Editor's Pick