'We Got You.' Rose McGowan Speaks Out After Harvey Weinstein's Arrest

Rose McGowan, one the first women to accuse Harvey Weinstein of rape, said she was “shocked” after the disgraced movie producer was arrested in New York City on multiple criminal charges Friday.

Weinstein turned himself into police on charges of rape, criminal sex act, sex abuse and sexual misconduct related to interactions him with two women, according to the New York Police Department. His attorney, Benjamin Brafman, said Weinstein plans to plead not guilty to all the charges. Weinstein has denied all allegations nonconsensual sex through his lawyers.

Reporting on sexual assault and harassment complaints against Weinstein by The New York Times and The New Yorker last fall prompted a deluge of sexual abuse allegations from more than 75 women, including McGowan, Gwyneth Paltrow, Salma Hayek, Angelina Jolie and Ashley Judd.

McGowan, who reached a settlement with Weinstein in 1997 after an encounter with him in a hotel room, said publicly last October that he had raped her. On Friday, she tweeted: “We got you, Harvey Weinstein, we got you.”

Speaking on ABC, McGowan said she wanted Weinstein in jail.

McGowan also stopped by Megyn Kelly Today about 90 minutes after Weinstein’s arrest to speak on how it felt to see him in handcuffs.

“To see him in cuffs on the way out, whether he smiled or not, is a very good feeling,” she said. “I actually didn’t believe this day would come.” 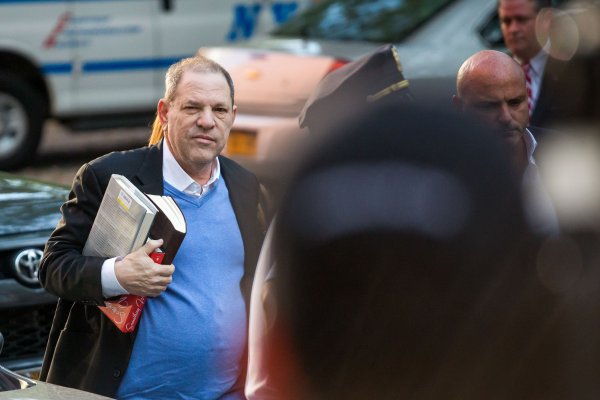 These Are the Books Harvey Weinstein Was Carrying When He Was Arrested
Next Up: Editor's Pick